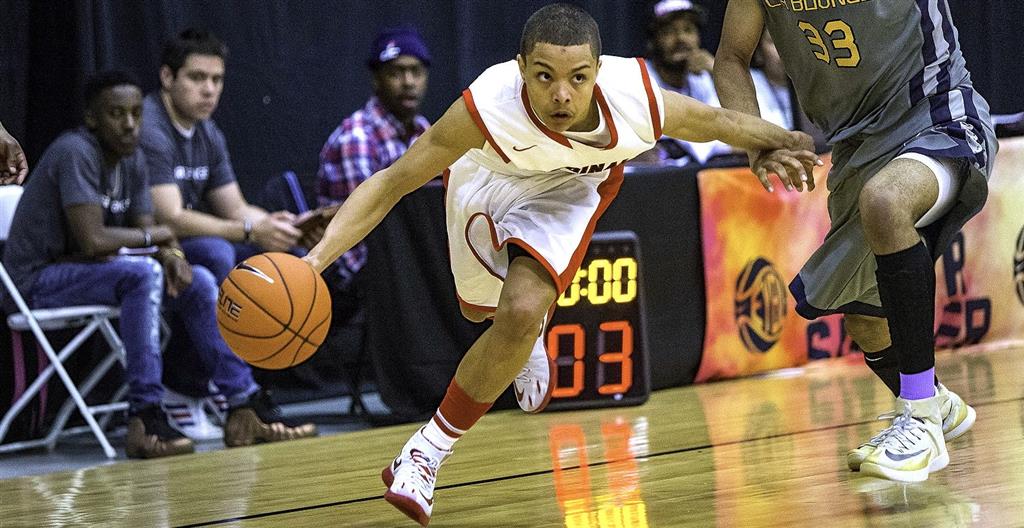 Michigan needs a point guard in the class of 2016 and the Wolverines stumbled upon quite a few new prospects during the two weekends of live evaluation play in April. One of those new names to pop up on the radar is Bryce Aiken.

Michigan needs a point guard in the class of 2016 and the Wolverines stumbled upon quite a few new prospects during the two weekends of live evaluation play in April. One of those new names to pop up on the radar is Bryce Aiken.

Aiken is a small point guard, standing 5-foot-10, who can fill up the score sheet in a hurry.

“If they let me shoot I’m going to shoot it. I can definitely shoot and I can dribble the ball,” he said when asked to explain his game after a win at the Nike EYBL in Lexington. “But I like to control the pace of the game and make the game easier for others around me and that’s the way I like to play.”

Aiken has seen increased interest this spring with his steady play in the Nike EYBL. He’s averaging 15 points per game in EYBL play, shooting 51% on twos despite his small stature and 41% on threes while handing out three assists per game. In front of John Beilein during a Saturday morning game, Aiken’s ability to get to the free throw line was what really shined. He attempted 10 free throws in a narrow win over Houston Hoops and has a free throw rate (FTA/FGA) of 59% this spring.

“Just becoming more of a leader and understanding the game more,” Aiken responded when asked how he’s improved his game. “Increasing my IQ and that allows me to recognize how the defense is playing me and pick my spots.”

A number of schools have shown interest in Aiken this spring, but he listed six as the schools recruiting him the hardest.

“The schools that are recruiting me the hardest are Stanford, Illinois, Miami, Seton Hall, Michigan and Harvard.”

“I actually talked to (Michigan)’s coach after the first EYBL session. Coach Vall from Michigan,” Aiken said. “He said he wants to stay in touch and keep interest in me. He’s going to be watching me and wants to build a relationship with me.”

While the interest in Michigan is still new, it’s a school that Aiken is interested in hearing more from.

“They play on TV a lot, I know that much,” he said. “I haven’t gone out so I don’t know too much about the school itself, but I know Coach B is the head coach there and after you see Trey Burke and how they develop their guards, they definitely let their guards go and it’s an offense that I could see myself in.”

He mentioned plans were already in the works to visit Illinois in May, but he also wants to trip to Michigan.

“Most definitely,” he said. “I would love to get out there and see how it is.”

With a fast-rising recruitment, Aiken still hopes to have his recruitment wrapped up before the early signing period this fall.

“To commit to a school, I’m thinking probably late August or early September.”