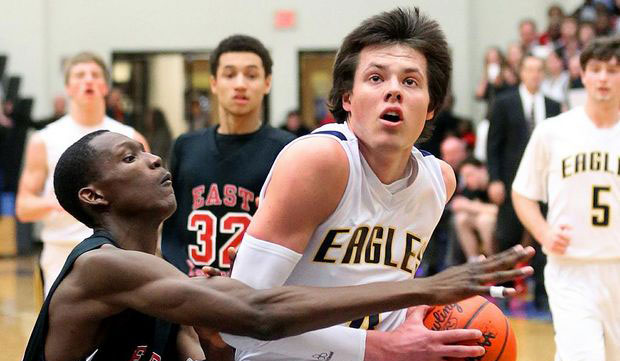 News of the visit was first reported by Corey Evans and Hibbitts confirmed the report to UM Hoops.

Hibbitts was a Class A All-State performer as a senior at Hudsonville, averaging 17.3 points, 11 rebounds and 2.4 blocks per game. He shot 48% from the floor and led Hudsonville to its third straight regional final. The 6-foot-8 senior has been playing with the Under Armour sponsored 1 Nation AAU team this spring.

Michigan coaches scouted the 6-foot-8 forward in March and he visited Ann Arbor for Michigan’s win over Rutgers on March 7th. His offers include American, Youngstown State, Central Michigan, Toledo and Lehigh, but he could be an intriguing option for the Wolverines as a preferred walk-on.

Michigan currently has one commitment in the class of 2015 from German forward Mortiz Wagner. Wagner, listed at 6-foot-9, is rated as a four-star prospect by both Scout.com and Rivals.com. He has yet to sign a letter of intent or be announced by the University of Michigan.