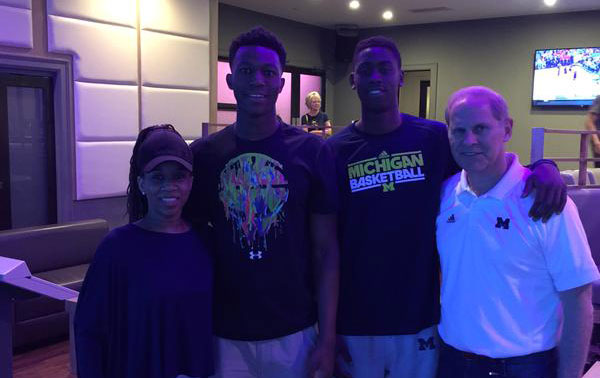 Michigan added a major commitment from five-star guard Tyus Battle this afternoon. Here’s everything you need to know about Michigan’s latest commitment including scouting reports, videos, rankings and much more.

Michigan added a major commitment from five-star guard Tyus Battle this afternoon. Here’s everything you need to know about Michigan’s latest commitment.

Excited to say that I am going to be a Wolverine!!🙌🏾〽️🏀😆 pic.twitter.com/xdEUC5o9ol

Battle is a consensus five-star recruit and he was most recently measured last summer at a USA Basketball event at at 6-foot-6.75″ with shoes, 190 pounds with a 6-foot-9 wing span.

Battle’s father told Scout.com that Tyus chose the Wolverines because of his relationship with coaches and players and also his role in the offense.

“The way he interacted with Caris [LeVert], Spike [Albrecht], Aubrey [Dawkins] and especially coach [John] Beilein and Lavall [Jordan], he just hit it off with them well. The biggest thing is he’s going to be ball handling guard.”

Tyus focused on his fit within the whole University:

“Just the mixture of academics and athletics,” Tyus told Scout when asked about his choice. “I really love the basketball situation and coach Beilein and the rest of the staff. They are amazing coached. You can see how they develop their players like Caris, Nik Stauskas and Tim Hardaway. That’s a big deal to me.”

Battle is a prototypical wing guard for Michigan’s offense. He’s known for his perimeter shooting stroke, but he also has ample athletic ability to make plays attacking the basket and in transition.

At this point his game has relied to heavily on distance shooting, which though a strength needs augmentation from slashing and two-point scoring. We did find his July play encouraging, because he raised his numbers to 15 points per game on 44 percent shooting during the live period. Battle appeared to start figuring it out by the end of the travel season, so we’re all very eager to see if he can build upon that in 2015.

Obviously, he’s an effective perimeter shooter, but he also possesses lean athleticism and a frame that should enable him to become legitimately strong as he progresses.

I also like his defensive potential at 6-6, with the spidery athleticism to defend wing forwards and many shooting guards as well.

As mentioned above, there’s a very high likelihood that Battle will become a successful high-major performer. The things he does well, at 6-6 and athletic, typically enjoy a very high translation level to college and beyond. There aren’t enough shooters and scorers in college basketball — but don’t take my word for it, just ask your nearest college coach — and Battle will supply that as early as his freshman season.

It only takes one look at the 6’5” Battle to tell that he is a tough competitor on the court. With great strength and an athletic build, Battle is an ideal wing for the USA team as he can provide lock down defense, outside shooting, and an ability to attack the basket. Along with Ellenson and Swanigan, Battle is a newcomer to the USA team and advanced throughout tryouts with his aggressive mindset. His father noted that Tyus seems to turn it on in July and he is definitely right about that. Last year Battle outplayed both VJ King and Luke Kennard in a 16U game in Peach Jam and this year his strong play with Team Scan helped them advance in the prestigious 17U tournament. He upped his scoring average during the Peach Jam and averaged almost 14 points per game to go along with a 40% mark from behind the arc. Battle will have a versatile role for the USA team and earned a spot with his defensive intensity, shot making ability, and overall athletic nature.

Unlike many of his counterparts, Battle does not need to hit the weight room as he is one of the most college ready players physically. He does need to improve his ball-handling skills to make him an even better threat on the perimeter. While he can bring up the ball against the press he is better in situations where just one or two dribbles are needed. He shot 36% from the three point line throughout the EYBL season which was brought up by his play in Peach Jam so Battle will also need to continue to make his shot as quick and efficient as possible.

Strengths:
A big perimeter player with high physical upside and a versatile floor game, Battle might actually be most gifted on the defensive end of the floor where he has the ability to be a true lockdown defender. He’s got a mature floor game for a celebrated young prospect because he doesn’t monopolize the ball, can pass off the dribble, and even looks into the post. He can really accelerate once he hits the gas off the dribble, has a handle that is developing into weapon, and can make tough pull-ups in the lane. Physically, he has good size, long arms, speed, quickness, and leaping ability.

Weaknesses:
The inconsistency of his three-point range is the most glaring weakness in his game right now. He needs to rework and simplify his mechanics to eliminate both the excess motion from the shot as well as the twisting motion that plagues his release and alignment. Once he’s able to become a more consistent three-point shooter, his floor game has the potential to be incredibly versatile.

Bottom Line:
He’s unique for a highly talented young player because he balances production and potential with an already efficient floor game and the physical tools to continuing improving for the foreseeable future.

Battle is perfect fit to play the wing position in Michigan’s offense. His length and athleticism are tools in any system, but the Michigan system should provide an outlet for Battle to succeed. With Michigan set to lose Caris LeVert on the wing after this season, Battle should step on campus as an instant impact option to replace LeVert and he has the size and skills to play the two or three in Michigan’s offense.

It’s hard not to see a bit of a Tim Hardaway Jr. fit for Battle in Michigan’s offense. He has similar versatility and athleticism and is a more than capable shooter from the perimeter.

He’ll also arrive on campus as Michigan’s highest rated signee since Glenn Robinson III and Mitch McGary and could be the Wolverines first McDonald’s All-American since Daniel Horton.

Battle is Michigan’s third commitment in the class of 2016, joining big men Austin Davis and Jon Teske. Michigan’s focus should shift almost entirely toward the point guard position. Michigan now has two big men and a multi-positional guard, but needs a true point guard to round out the mix. Cassius Winston and Quentin Goodin are the two point guards with Michigan offers, but the Wolverines have also been evaluating CJ Walker, Bryce Aiken, Bruce Brown, Kevin Huerter and others at that spot.

After a handful of recruiting disappointments over the last several, landing an early commitment from Battle is a major coup for John Beilein. When Battle arrives, Derrick Walton and Zak Irvin will be seniors and Aubrey Dawkins, Kameron Chatman and Muhammad-Ali Abdur-Rahkman will all be juniors. Battle should fit in very nicely with that group in a team that should be able to compete for the Big Ten.