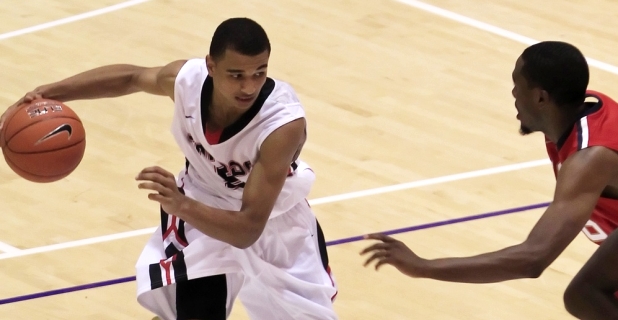 Canadian combo guard Jamal Murray visited Kentucky last week, but Michigan remains on his list. A decision on reclassification could come as soon as June according to a recent report.

Canadian guard Jamal Murray took a visit to Kentucky last week and his father told ESPN.com that it “went well”. He also added that other schools are still involved in Murray’s recruitment including Oregon, Michigan, Michigan State, Indiana and UConn.

Murray is projected as the No. 21 pick in the 2016 Draft according to DraftExpress and has many unique options. He could remain in the class of 2016 as a high school player this season and then either attend college or declare for the NBA out of high school as an international prospect. He could also reclassify to the class of 2015 and play this season in college before declaring for the draft.

Murray reportedly will make a decision on his future in June according to a lengthy feature story in The Globe and Mail:

The key, Roger Murray said, is to see where Jamal would have the best opportunity.

Murray is likely to decide by June. High school players typically decide by the national letter-of-intent deadline, which this year was set for May 20 – but Murray has rushed to complete additional schoolwork so he can play college hoops this fall, instead of the planned 2016. To do so, he would bypass the letter-of-intent deadline and sign a letter of financial aid at some later point.

“You have to have some knowledge of where everyone is coming from,” Roger Murray said of recruiting. “Just maintain your structure, of the original way you wanted to go, without getting caught up in the whole hoopla of it. It’s a delicate balance.” Asked about his son’s ability and readiness for college basketball, Roger is emphatic: “Without a doubt.”

Kevin Huerter’s rise to recruiting prominence has been quick this spring on the Nike EYBL circuit and the 6-foot-5 guard had a monster 30 point, five rebound and four assist performance in which he knocked down 8 of 14 triples and didn’t turn it over.

Huerter is now averaging 13.2 points per game while shooting 44% from three-point range in EYBL play. His City Rocks team cemented their bid for the Nike Peach Jam EYBL Finals in Georgia this July.

Huerter’s primary list appears to include Notre Dame, Michigan, Syracuse, Creighton, Davidson and Iowa and there’s still discussion that he could move to the class of 2017 with a potential year of prep school – something that would be required for an offer from Syracuse.

“I will be interested [in Syracuse],” Huerter told 1045 The Team, Even before that I was looking at prep schools and seeing if that was something I wanted to do. My brother is doing it so I already have been looking at those options.”

The New York guard was tabbed as one of the top performers at this weekend’s EYBL session by Scout.com:

Huerter is someone who can really shoot the basketball, and then also has game off the dribble and solid athleticism. With long arms and the ability to move his feet, Huerter is versatile on defense, and then on offense he can play almost any perimeter position. His shot making and versatility make him one of the more interesting prospects to monitor as it heads into the summer.

Brown is averaging 16.4 points, 5.9 rebounds, 3.4 assists, and 1.7 steals per game through three sessions of the Nike EYBL. He was also named as a top performer over the weekend by Scout.com.

I’ve seen several questions regarding recent Michigan commitment Tyus Battle this spring. Battle has sat out for the spring AAU circuit while he recovers from a lingering foot injury that affected his junior season. The hope is that he’ll be back in action for USA U19 tryouts in late June and for the July evaluation period with the Nike Peach Jam.

Top remaining 2016 target Cassius Winston is also sidelined with a broken hand and is hopeful to be back to the Peach Jam. Winston visited Michigan last week and told Scout.com it was a “good visit”.

“It was a good visit,” Winston said. “My family got to see the campus again. It is a place I have seen a lot, and it was just a good visit.”

Expect Winston to continue to keep things close to the vest and take his time with his recruitment. The in-state guard is being pursued vigorously by both in-state schools, but has been firm in his position that he wants to take official visits before making a college decision.