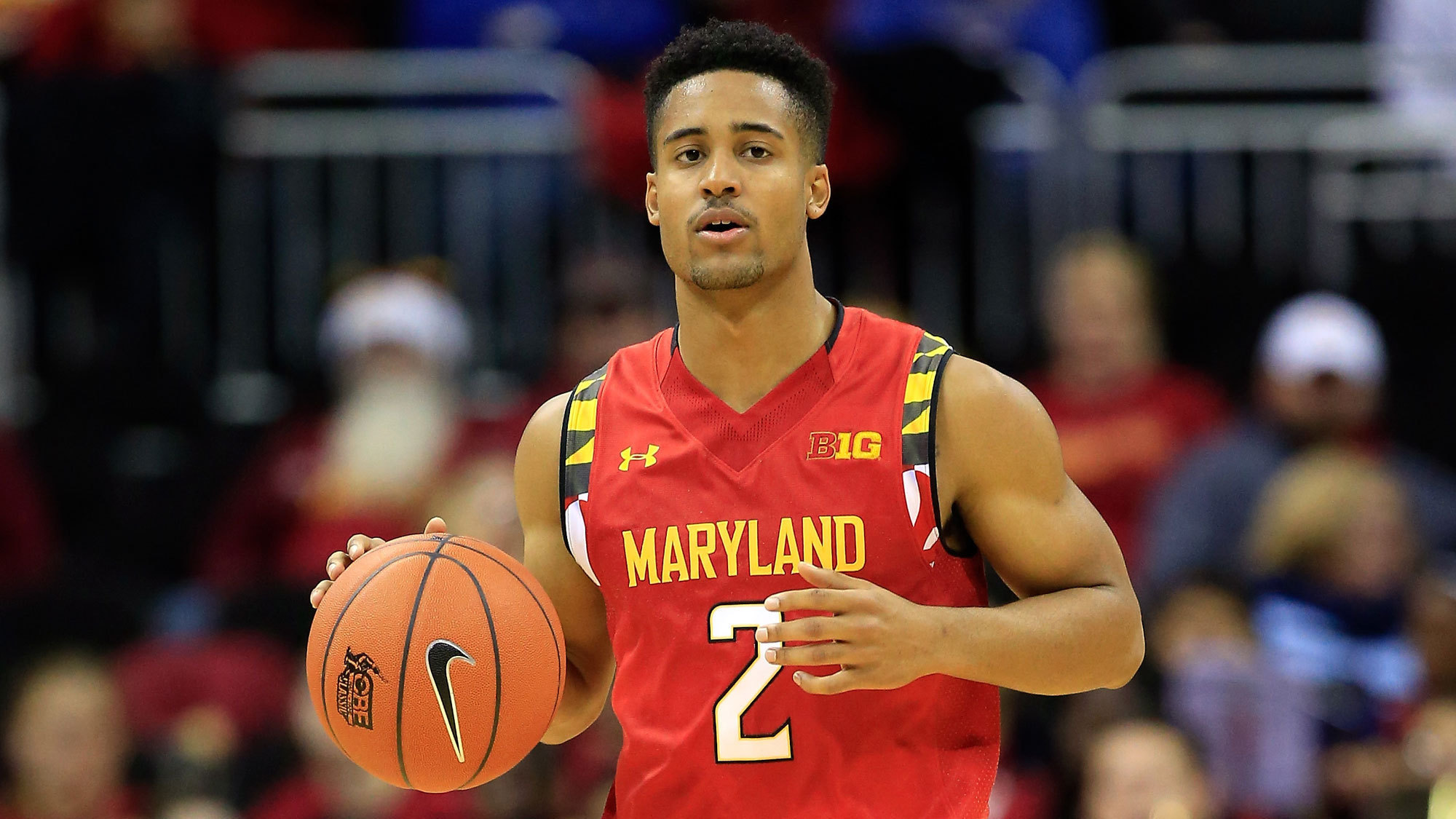 The 2015-16 season is over five months away, but rosters across the Big Ten are nearly finalized as the late signing period is in the books, the NBA Draft list is final and and most transfers have picked a destination. So what better time than to bring back our Big Ten Power Rankings and look ahead to next year.

The 2015-16 season is over five months away, but rosters across the Big Ten are nearly finalized as the late signing period is in the books, the NBA Draft list is final and and most transfers have picked a destination. So what better time than to bring back our Big Ten Power Rankings and look ahead to next year.

Maryland’s senior day was a busy affair and watching from press row last season I was struck by how many of the Terps’ graduating seniors started somewhere else. Maryland graduated four transfers last season, but adds two more to the mix along with the highest rated recruit in the conference in Diamond Stone. With Jake Layman and Melo Trimble returning, the Terps are garnering mentions as preseason No. 1 entering the 2015-16 season.

Robert Carter, a Georgia Tech transfer, is a 6-foot-8 combo forward that should replace some of Wells’ toughness while adding a significant rebounding threat. Rasheed Suliamon had ups and downs at Duke, but he should be an immediate rotation player while Stone could very well be the conference’s best big man. Layman is already one of the most versatile stretch fours in the league while Trimble is arguably the best returning ball screen player. The Terps even have one of the more forgiving Big Ten schedules.

Fresh off of a trip to the Final Four, Michigan State loses two starters in Branden Dawson and Travis Trice. Trice was one of the primary reasons why Michigan State made the Final Four (he averaged 19.8 points per game and hit 13 threes in the first two weekends of the tournament), but Eron Harris is an ideal replacement. Compare the shot charts from Trice’s senior year to Eron Harris’s sophomore season at West Virginia.

Deyonta Davis won’t rebound like Branden Dawson, but he’s oozing with potential and could be more effective at stretching defenses than Dawson. The key for the Spartans will be Denzel Valentine. On his good days, he’s one of the best players in the conference, but he’s struggled with consistency throughout his career. He has the tools to be an All-Big Ten first team player as a senior and how far Michigan State goes will depend on his progression.

Yogi Ferrell is the league’s best point guard and he’ll have a big man this year with the signing of Thomas Bryant, but questions remain for the Hoosiers. They lack depth on the interior after losing five players to transfer or dismissal, but still have James Blackmon Jr. and Troy Williams to surround Ferrell with one of the league’s better shooting guards and combo forwards.

The Caleb Swanigan saga finally came to an end with the big man picking Purdue last month. The addition of Swanigan means that the Boilermakers will have three of the league’s top big men in Swanigan, AJ Hammons and Isaac Haas. Matt Painter appears to have promised that Swanigan will play the four position next to one of the other two bigs at the five. Is it feasible? I have my doubts, but to Painter’s credit the Boilermakers post up as much as anyone in the country.

According to Synergy Sports, only six teams (Gonzaga, St. Mary’s, New Mexico St., Alabama St., LaSalle and Oakland) in the country threw the ball in the post more often than Purdue last season.

My concerns with the two-post look for Purdue revolve around the fact that the Boilers already pounded the ball into the post pretty well, but still weren’t a great offensive team.

They also turned the ball over more often than anyone else in the Big Ten last season and I’m not convinced that Johnny Hill, a graduate transfer guard from UT-Arlington who had a higher turnover than assist rate last season, will fix those problems. On the other hand, the addition of Swanigan should make Purdue one of the best rebounding teams in the Big Ten after they dominated the offensive glass, but struggled on the defensive glass last season.

On paper, Michigan returns almost all of a team that went 8-10 in the Big Ten last season. Returning all of a sub-.500 team isn’t always a recipe for success, but Caris LeVert and Derrick Walton were sidelined or hamstrung by injuries for a majority of last season and the rest of John Beilein’s team made major strides in their absence. Now the Wolverines add LeVert and Walton back into the mix and should have a significantly better team around them than we saw last December. The addition of Duncan Robinson’s shooting ability and Moritz Wagner and DJ Wilson in the front court should also help what was one of the Big Ten’s worst front courts last season.

Anyone that has written about the Big Ten in the last decade knows the number one rule of the offseason: never write off Wisconsin. It doesn’t really matter who Bo Ryan has on his roster, he’s usually going to field a team that competes for the Big Ten crown.

But while last year’s Wisconsin team was one of Ryan’s best ever, it also loses more talent than any Wisconsin team in recent memory with Frank Kaminsky and Sam Dekker off to the NBA and Badger stalwarts Josh Gasser and Traevon Jackson finally graduating. Wisconsin loses about two-thirds of its field goal attempts from last season, and these comparisons from ShotAnalytics show what the Badgers lost and what they return.

Ohio State brings in the league’s best recruiting class, but has to replace four starters including D’Angelo Russell. Russell was sublime last season and even if JaQuan Lyle is an instant impact scoring guard, the Buckeyes will have a lot of ramping up to do.

Iowa returns four started from last year’s NCAA tournament team, but the losses of Aaron White and Gabriel Olaseni will certainly be a blow. The Hawkeyes incoming class has numbers, but isn’t that highly ranked nationally. Expect the core of Adam Woodbury, Anthony Clemmons, Peter Jok, Jarrod Uthoff and Mike Gesell to remain competitive in the Big Ten.

Illinois has seemed to be stuck in neutral since John Groce arrived. The Illini made the tournament in his first season before missing the Big Dance in each of the last two seasons and they’ve finished with 7, 8 or 9 conference wins in all three years. What we’ve come to expect from Illinois under Groce is a good defense and an offense that just isn’t consistent enough to win important Big Ten games.

What’s wrong with Illinois’ offense? The Illini keep running ball screens and just aren’t very efficient when they do. Only two teams ran more ball screens than Illinois last season (Northwestern and Nebraska) and only three teams were less efficient (Purdue, Rutgers and Nebraska) in the ball screen game. Two of those three teams were cognizant of their ball screen inabilities and just didn’t run very many (Purdue and Rutgers), but Illinois – like Nebraska – kept on trying. It’s no surprise that Illinois and Nebraska had two of the conference’s four worst offenses.

Chris Collins is bringing in the talent necessary to make Northwestern relevant. Aaron Falzon and Jordan Ash might not be five-star recruits or All-Americans, but they are quality top-250 level players that can make an impact in the Big Ten.

The incoming recruits are nice, but the real story is that Northwestern returns several good players. Alex Olah is a legitimate low post scorer and was ranked fifth in the conference last season in post-up scoring. Bryant McIntosh was one of the more underrated impact freshmen in the league last year and Tre Demps is capable of hitting big shots. Sophomore wing Vic Law should make a big jump as he starts to turn some of his potential into production.

For a team that lost 10 of its first 11 Big Ten games last season, there’s reason for promise. The Wildcats can build off of that 5-2 finish to the regular season last year and have the talent to surprise.

Sometimes a complete reboot is what a program needs. Nebraska came into last season on the heels of a surprise NCAA tournament appearance, but 2015 was a disaster from day one. The dirty little secret is that Nebraska overachieved in the win column in 2013-14 as its nearly even efficiency margin didn’t bode well for the future.

We saw some of that regression last season and now we’ll see almost a completely new Cornhusker team in 2015-16. Shavon Shields will return for his senior year and should anchor Nebraska, but Terran Petteway  and Walter Pitchford both are moving on before their eligibility expired.

In a way, Nebraska’s situation reminds me a bit of Michigan early in John Beilein’s tenure. The Wolverines made a surprising run to the NCAA tournament in 2009 despite a modest efficiency margin and returned a high-volume scorer in Manny Harris. Facing higher expectations in 2010, Michigan got off to a bad start and was never able to get back on track. When they lost Harris and Sims, most expected them to continue to struggle, but a fresh start turned out to be ideal as Darius Morris and Tim Hardaway Jr. helped the Wolverines back to the tournament.

I’m not predicting Nebraska will make the tournament this season, but the Huskers needed a shake up and a fresh start. Remember that Nebraska loses a lot of production, but shouldn’t have a problem replacing the efficiency. DJ Newbill was a first-team caliber All-Big Ten player last season and carried the Nittany Lions for long stretches. The adding a couple of top-100 recruits will help, but replacing a guy who used over a quarter of your possessions for the past three seasons is never easy.

Andre Hollins and Deandre Mathieu were one of the more underrated backcourts in the conference while Elliot Eliason and Maurice Walker handled the interior for the Golden Gophers last season. Expect Nate Mason and Carlos Morris to step up in the backcourt, but it’s hard to imagine Minnesota improving after losing four of its best players from a season ago.

Rutgers lost its final 14 Big Ten games last season and now loses its top two scorers from a season ago in Kadeem Jack and Myles Mack to graduation while Junior Etou, a starting forward, opted to transfer. Top 100 point guard Corey Sanders should bring plenty of highlights, but it’s hard to imagine the Scarlet Knights competing next year.