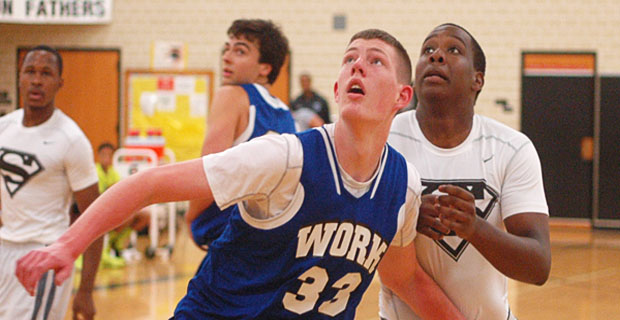 Jim Harbaugh has drawn plenty of the headlines for his aggressive football camp tour this summer (among other things), but John Beilein hosted his annual College Practice Camp on Saturday.

Jim Harbaugh has drawn plenty of the headlines for his aggressive football camp tour this summer (among other things), but John Beilein hosted his annual College Practice Camp on Saturday.

The camp has long served as a valuable evaluation tool for Beilein and his staff and several high profile past commitments have attended the camp including Tyus Battle, Tim Hardaway Jr., Darius Morris, Kameron Chatman and many others.

The two-part event featured a morning session for underclassmen (2018 and 2019 classes) and an afternoon session for upperclassmen (2016, 2017 classes). The talent pool as solid as always, even if it lacked a bit of the star-power that we saw last year with Tyus Battle, Jon Teske, Quentin Goodin, Cassius Winston, Derryck Thornton and many others.

We’ll have much more from College Practice Camp in the hours and days to come.

Cassius Winston still has a cast on his wrist after suffering a broken bone this spring, but the 6-foot-1 point guard was on campus in Ann Arbor once again. He was in town watching his brothers participate in the morning session of the camp while also catching up with coaches and players.

It was remarkable how many current players were still on campus and helping out with camp. Tim Hardaway Jr. and Nik Stauskas were both around as was most of Michigan’s returning roster.

Duncan Robinson, Aubrey Dawkins and Derrick Walton all demo’d various shooting drills for the campers and Robinson and Dawkins’ shooting strokes were a sight to be seen. Both players lit it up from the perimeter in timed drills while Walton also looked great shooting on the move.

DJ Wilson, Ricky Doyle and Mark Donnal all helped out with the various big man portions of the camp and looked to have made noticeable physical improvements.

Christian David is one to watch

We’ll fill out our class of 2017 recruiting board over the next two weeks, but Christian David is one name to watch. The Canadian guard has already put together a big spring and Michigan has been tracking him for over a year.

He had a solid performance at Michigan’s College Practice Camp with an easy feel to his game. He’s a complete offensive player and it’s obvious how he would fit in Michigan’s offense.

David will be making the move to the United States this season when he transfers to Vermont Academy. He’ll play alongside another Michigan target, combo guard Bruce Brown, at Vermont Academy. Here are some recent highlights of David in action.

Fresh off of his Michigan commitment, one of the stars of last year’s camp is headed to Colorado Springs to attempt to make another USA Basketball team. Tyus Battle represented the USA at the U17 level last year and will attempt to make the U19 team this fall.

Battle will have his work cut out for him as he’s one of just six class of 2016 prospects invited to the tryout and he’s missed significant time with a foot injury throughout the winter and spring. The U19 squad will be coached by Arizona’s Sean Miller, Providence’s Ed Cooley and Dayton’s Archie Miller.

USA Basketball will have two training camp sessions, one from June 13th through 20th in Colorado Springs and another June 21st through 26th in Athens, Greece. The U19 World Championships will tip off on June 27th and run through July 5th.

Canadian combo guard Jamal Murray recently took an official visit to Kentucky and he’s following that up with a trip to Oregon this week.

Oregon has had strong success recruiting Canada in recent years and has recently signed Canadians Dillon Brooks and Dylan Ennis. Oregon assistant coach Mike Mennenga has previously spent time as the co-director of the CIA Bounce AAU program in Canada.

Murray appears to be leaning toward graduating this semester and attending college next season. The Ducks and Wildcats are still considered the favorites in Murray’s recruitment, but ESPN’s Paul Biancardi reports that Michigan remains in the mix, even with two official visits already in the books.

Jamal Murray is a high level combo guard. He already made an official visit to #Kentucky, now on campus at #Oregon & looking at #Michigan.