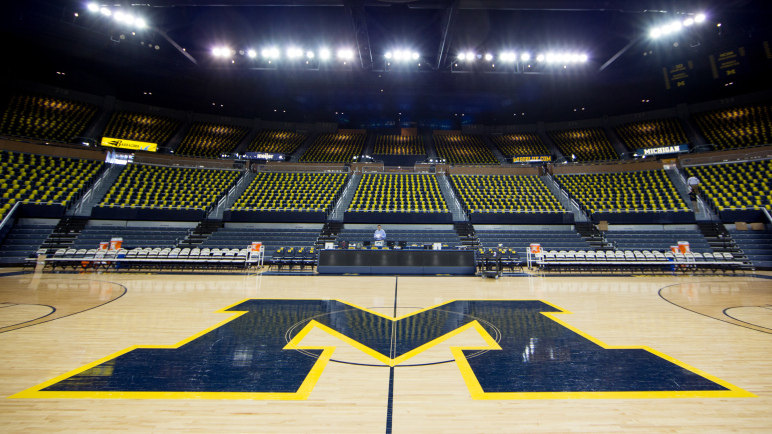 UM Hoops was on hand for both sessions of Michigan’s College Practice Camp on Saturday. Here are scouting notes on underclassmen (class of 2018, 2019) that caught our eye in the morning session.

UM Hoops was on hand for both sessions of Michigan’s College Practice Camp on Saturday. Here are scouting notes on underclassmen (class of 2018, 2019) that caught our eye in the morning session.

Cobb already has good size on the wing and he’s a smooth player. His size makes him one of the bigger players at his age level, but he projects to the wing long term. Entering 9th grade, he still has a long ways to go in his development, but he was easily one of the stars of the morning session of camp. He has a nice jumper and his offensive game was very smooth as he finished effectively at the basket throughout camp.

Nance is an impressive physical specimen despite his young age. He already has terrific size and long arms and moves very well. His dad was a former NBA star (Larry Nance) and his brother averaged 16 points and seven rebounds per game at Wyoming. His brother measured out at 6-foot-9, 227 pounds with a 7-foot-2 wing span at the NBA Combine this spring which helps provide at least a glimpse at where Pete could project size wise.

His jumper is smooth and he’s already a good athlete, but it was his length that really impressed. He’s one to watch going forward and it would be hard to imagine he goes underrecruited after his brother’s success.

Parks was the most physical big man at camp in the morning session. He was able to push around smaller defenders at the rim and also demonstrated solid foot work. He’s very explosive and was the best finisher among the big men. He had one sequence where he blocked consecutive shots by Sean Cobb including sending back a strong drive to the rim. Parks is related to Villanova commit Omari Spellman and is one to track over the next few years.

Francis is regarded as one of the top young players in the state of Ohio and it was evident why. He has a great first step and was one of the best slashers in the morning session. The freshman point guard already stands 6-foot, 175 pounds and looks the part of a future high-major player. Francis obviously has the physical tools, but he showed an impressive basketball IQ with his ability to create for himself and others.

Godwin already has a smooth stroke, a good frame and a lot of bounce. He’ll continue to refine his game over the next few years, but it was clear why he’s already regarded as one of the top in-state prospects in the class of 2018.

Kithier was one of the more impressive big man prospects in attendance during the morning session. He has great size, attacks the basket and was productive in five-on-five play. His fundamentals are solid and he’s definitely one to watch going forward.

Scruggs already has a great frame for a big man at 6-foot-6 and was active and athletic around the hoop. He wasn’t as physical as Parks, but the potential is there to be an impact player inside.

His shot was a bit inconsistent, but I really liked Pierre Mitchell Jr.’s floor game. He got in the lane consistently and was able to find people or score on his own. He looked very good during one-on-one drills and carried that strong play over into five-on-five action.