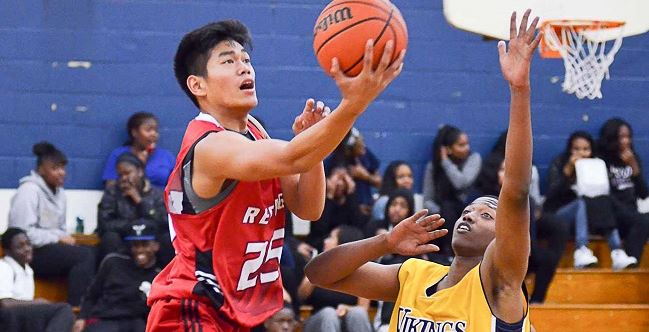 Class of 2017 guard Christian David was one of the top performers at Michigan’s College Practice Camp earlier this month and there’s little doubt that the versatile guard is firmly on Michigan’s radar.

Class of 2017 guard Christian David was one of the top performers at Michigan’s College Practice Camp earlier this month and there’s little doubt that the versatile guard is firmly on Michigan’s radar.

David’s phone was ringing all day on Monday, the first day that coaches could contact class of 2017 prospects, and he heard from Michigan head coach John Beilein among many others.

“(Coach Beilein) said that he enjoyed watching my game,” David said in a phone interview on Wednesday. “And that they are going to keep recruiting me.”

While Beilein didn’t extend a scholarship offer yet, he made it clear that the Wolverines plan to track David with his S-Elite team this July during the live evaluation period. Michigan wasn’t the only school to check in on the play-making guard on Monday. He also heard from Oregon, Illinois, Harvard, Penn State and Providence and the Friars extended a scholarship offer.

On the summer AAU circuit this summer, David plans to focus on rounding out his game and improving his ball handling skills.

“The spring has gone pretty well. We’ve won two tournaments thus far,” he said. “Right now coaches are telling me to work on my ball handling skills and that’s my goal to improve this summer and show my consistency with my shooting.”

We asked our friends at North Pole Hoops, the leaders in Canadian basketball scouting, to breakdown David’s game and potential at this stage.

“Christian is a highly skilled guard with offensive versatility due to his vision and feel for the game,” NPH wrote. “He’s only scratching the surface of his potential. He must add physical strength to take his game to next level; to be able to finish with contact and add a new element of confidence to help impose his will on games. David is far from a finished product and still maturing. Overall, he’s an intriguing prospect that we look forward to watching take the next step in his development.”

He had a chance to put his skills on display at Michigan’s Camp earlier in June and was one of the more impressive players in attendance. David enjoyed his time in Ann Arbor while playing in the camp.

“(Camp) was good. I enjoyed it, there were a lot of great prospects at camp and I had a lot of fun,” he said. “I liked (the visit). Campus is very big and the facilities are nice.”

A college decision is still a ways off for David and he spent more time this spring figuring out where to attend high school next season. He’ll be headed south, leaving Canada for prep school in the United States. The move to Vermont Academy, where he’ll play in the prestigious NEPSAC conference, will allow him to play with and against better talent.

“That’s exactly it,” David responded when asked if he was transferring to face better competition and get more exposure. “I think it was the best fit for me. I connected with the coaches really well and they said that I can be an immediate contributor there.”

One of David’s new teammates at Vermont Academy is class of 2016 guard Bruce Brown, another Michigan target, so it’s safe to say that the Wolverines will be keeping an eye on both players throughout the winter.