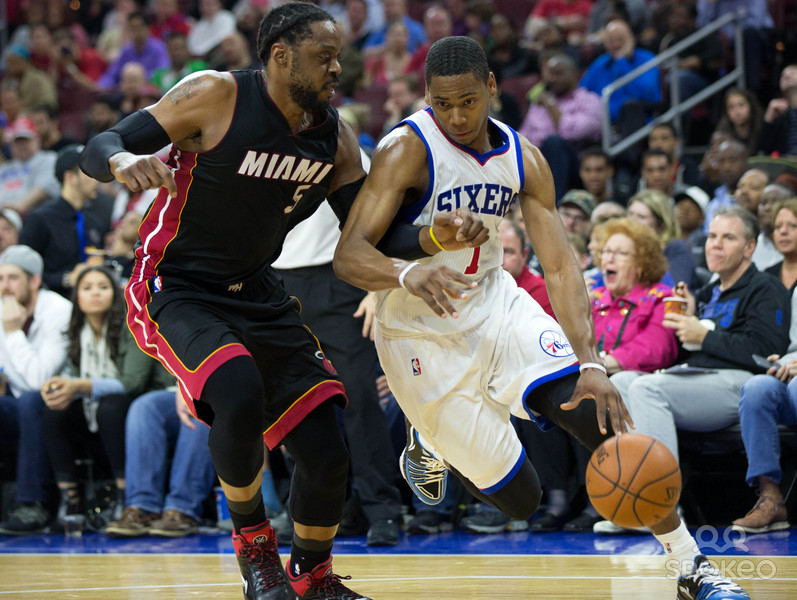 The Philadelphia 76ers declined Glenn Robinson III’s player option while Caris LeVert is already projected as a high pick in the 2016 draft.

After one year in the NBA, Glenn Robinson III is a free agent.

According to a report by NBA insider Adrian Wojnarowski, the Philadelphia 76ers declined to give Robinson, who left Michigan last spring after his sophomore season, a qualifying offer.

Robinson was drafted 40th in the 2014 NBA Draft by the Minnesota Timberwolves, who placed Robinson on waivers in March. Wojnarowski writes that Robinson “had significant interest after Minnesota placed him on waivers in March and has appeal to several teams in the mode of developing young players.”

Caris LeVert isn’t just facing high expectations from Michigan fans during his senior season — NBA Draft scouts and pundits already see him as a consensus first round pick. While the NBA Draft is still a year away, here’s a run-down of where notable NBA Draft outlets have LeVert projected next season.

John Beilein told reporters in early June that he expected LeVert to be full-go on July 1st (today) as the summer semester kicks off.

Tim Hardaway Jr. was traded by the New York Knicks on draft night and was introduced by the Atlanta Hawks today.

Hardway was motivated by Phil Jackson’s comments — essentially that Jerian Grant was a better guard for the Knicks than Hardaway — after he traded him.

“Once I heard him say that, all hands on deck now,” Hardaway told reporters during his introductory press conference. “Obviously as a basketball player, you take that to heart. So, it’s time to move on, get better, and when the time comes, the time comes. Right now, it’s all about Atlanta basketball.”

Hardaway is also eager to put the triangle offense behind him and sounds like a player that could use a fresh start.

“There was a lot of negative but a lot of positive moments through last year,” Hardaway said. “It really helps you grow as an individual and a ball player to realize that nothing comes easy in this league and you have to work for everything. So, it definitely made me mature a lot more as a basketball player and take advantage of this opportunity a lot more.”

Reports were also that Hardaway received a call from Carmelo Anthony, who was furious that he was traded, on draft night. Anthony also tweeted words on encouragement for Hardaway.

Fresh off of a successful campaign in Italy, Jordan Morgan will participate in the NBA Summer League with the Orlando Magic (July 4-10) and the Minnesota Timberwolves (July 10-20).

Morgan told the Free Press that he hopes to play as much as possible.

“I was third in one of our leagues in the EuroCup in rebounding, so they know I was performing,” Morgan said. “Maybe they want to see if I improved.”

Getting the opportunity to play in both leagues this year should be an asset.

“I just want to play as much as I can, play in front of as many people as I can,” said Morgan, who is looked at as a power forward at 6-foot-8.