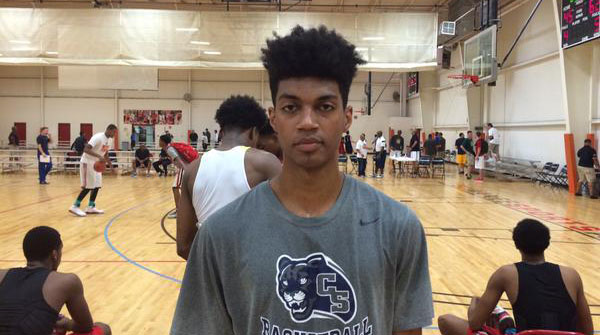 Ibi Watson led All-Ohio Red to a championship at the Best of the South tournament in Suwanee, GA over the weekend and earned MVP honors in the process. By the time he was back home in Ohio on Sunday night, he had added his first Big Ten offer from Indiana. The Indiana offer was Watson’s first, but more high-major offers could be coming soon if he continues his impressive play.

Ibi Watson led All-Ohio Red to a championship at the Best of the South tournament in Suwanee, GA over the weekend and earned MVP honors in the process. By the time he was back home in Ohio on Sunday night, he had added his first Big Ten offer from Indiana.

The Indiana offer was Watson’s first, but more high-major offers could be coming soon if he continues his impressive play.

“Michigan has been interested,” Watson said in an interview with Inside the Hall. “Coach Beilein was at most of our games and I’ve been talking to him. Iowa has been involved too. Florida just got involved a week ago and those are the main ones.”

Watson is already familiar with the Wolverines. He’s visited Ann Arbor multiple times including for a basketball game in February, College Practice Camp, Team Camp and a full unofficial visit following Team Camp in June. He hasn’t just gotten familiar with campus, he also has a connection to a current Wolverine.

Caris LeVert attended the same high school as Watson, Pickerington Central, and he looks up to LeVert as a role model.

“Caris is like a big brother to me,” Watson said. “He’s really cool, he’s a great guy and he’s a great example of someone who was under the radar in high school and didn’t pick up many offers until late in his high school career and was able to become what could be a future first round draft pick. He’s a good example for me and a great role model.”

Watson spoke highly of Michigan’s program and staff in a phone interview on Monday afternoon.

“I just love the coach staff there (at Michigan),” he said. “It’s like a family environment there. The facilities are great and I feel like I would be a great fit for their system as well as Indiana’s. Both of them are great places. Offer wise, I think they might have been waiting for Tyus Battle to recommit because some people were thinking he might go back to Michigan, but this morning he committed to Syracuse.

“Coach Beilein said he will be in Milwaukee to watch me play. So I think I can if I can play well and show him some stuff he’ll probably be able to extend an offer.”

The 6-foot-5 wing played well on the Nike Elite Youth Basketball League circuit this spring, averaging 12 points, four rebounds and 1.2 assists per game including a pair of 20+ point outbursts in Minnesota, but he took his game to the next level on the June camp circuit. Watson credited his improvement to a new sense of aggressiveness on the court.

“I think (the new interest) is more from high school team camps and stuff where I started playing more aggressive and playing with more confidence and swagger,” he said. “That’s what all the high-major coaches were telling me that I was missing was that aggressive go get it attitude. Now that I’m starting to play with that I think that’s what’s kind of separated me.”

The next step for Watson, who is already well-regarded for his shooting ability and length, is improving his ball handling and defense to improve his versatility at the next level.

Michigan has noticed and the Wolverines should be watching closely over the next two weeks. Watson’s All-Ohio Red team will be playing in Milwaukee at the NY2LA Sports Summer Jam this week before heading to the AAU Super Showcase in Louisville the following week. Expect Michigan to be represented in the crowd when he takes the floor.

Quotes from our friends at Inside the Hall.