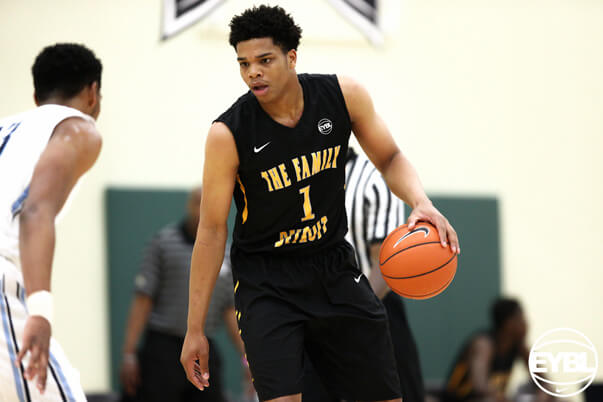 Michigan is in Miles Bridges’ final five, Cassius Winston continues to be a priority for both in-state programs, and two new class of 2017 prospects are mentioning Michigan.

Five-star forward Miles Bridges announced his five finalists today and Michigan made the cut. Bridges is down to Michigan, Michigan State, Kentucky, North Carolina and Indiana, according to a report by ESPN.

Bridges told ESPN that he plans to take official visits this fall and then announce his decision before December.

“I talk to Coach (John) Beilein all the time and it’s a great situation,” Bridges told ESPN. “I love the way they bring in guys who aren’t ranked and turn them into pros.”

In the least surprising news of last week, John Beilein and Tom Izzo were spotted at every game that The Family played at Nike Peach Jam. Both coaches were keeping tabs on top-50 point guard Cassius Winston, along with Miles Bridges.

Winston is a priority for both coaches and programs and is planning to take official visits this fall.

“I think I’m visiting Stanford, Harvard, Michigan and Michigan State as of right now, and probably Pittsburgh,” he told City of Basketball Love. “Probably the five schools coming after me the hardest.”

“They’re both two strong programs, both winning programs,” Winston said of Michigan and Michigan State. “I can go there and I’ll be in a good system, close to home, so they’re both good schools.”

Ibi Watson opened the July evaluation period with a flourish and played his way into a Big Ten offer. Indiana offered the Pickerington Central wing guard on Sunday evening and Michigan watched him on Saturday and Sunday, according to reports.

Watson was a top performer at Michigan’s College Practice Camp and earned MVP honors at the Best of the South Tournament in Suwanee, GA.

He averaged 12 points, 4.2 rebounds and 1.2 assists per game for All-Ohio Red, who failed to qualify for the Peach Jam, in the Nike EYBL.

Five-star junior Kris Wilkes wants to visit Michigan. He’s a five-star prospect and the ranked 16th overall in the class of 2017.

The versatile wing is already pretty far along in the recruiting process and has taken three unofficial visits, but Michigan is on his list of future destinations.

“Recently I went to Vanderbilt, Kentucky and Illinois,” Wilkes told Rivals.com. “Each program stands out in its own way, they all have different things that I like about them.”

“Not planned,” Wilkes said when asked if he has any other trips on the schedule. “But I hope to go visit Ohio State, probably go visit Michigan and go visit Notre Dame too.”

Wilkes is focused on developing a strong relationship with his future coaches.

“Probably the staff relationship. How they work together how they talk and get along together,” he said about the factors important to his decision. “How I get along with them and what kind of role I’ll be playing. I’m willing to go anywhere. The college that offers the best things for me that’ll be my choice”

Myles Cale on the radar

Cale was one of the standouts at the Under Armour All-American Camp in Charlotte over the weekend. The 6-foot-4 combo guard told Rivals.com that he’s heard from several schools, including Michigan, since the June 15th contact date.

“I heard from La Salle, Temple, James Madison, Maryland, University of Delaware, Michigan, Xavier,” Cale told Rivals.com. “And other schools that I can’t think on the top of my head”

The Delaware native has already visited James Madison, Temple and Maryland and is leaning toward staying close to home.

“Yeah, well around the range of 2 hours away or 4 hours away,” Cale explained. “Because I want to go somewhere (away from home), but not too far.”