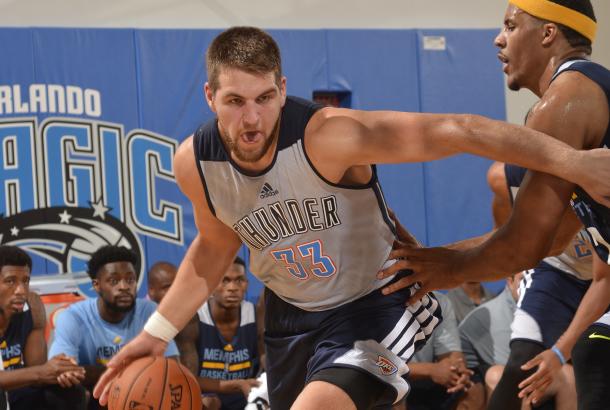 The NBA Summer League is in full force and while Michigan doesn’t have any rookies this year, several former Wolverines are staying busy this summer. Here’s the latest on Mitch McGary, Nik Stauskas, Trey Burke and Glenn Robinson III.

The NBA Summer League is in full force and while Michigan doesn’t have any rookies this year, several former Wolverines are staying busy this summer.

Mitch McGary had a great week at the Orlando Summer League. He looks healthy and explosive and has clearly dropped some weight. He had an impressive 16 point, seven rebound showing against the Memphis Grizzlies that featured this monster tip-slam among other highlights.

“I’m sick of being injured and not being able to play at full strength 100 percent,” McGary told NewsOK. “So this summer was really key for me. I stayed in Oklahoma City and just been working my tail off to get into shape.

“I feel great. This is the best I’ve felt in a couple of years, in three years, since before back surgery.”

McGary averaged 12.5 points and seven rebounds during four games in the Orlando Summer League. The Thunder re-signed Enes Kanter to a large

According to a report by ESPN, Trey Burke is headed to USA Basketball’s upcoming minicamp in Las Vegas.

The camp will run from August 11th through 13th on UNLV’s campus. Burke and six additional invitees — Chicago’s Jimmy Butler, Memphis ‘ Mike Conley, Golden State’s Draymond Green and Harrison Barnes, Orlando’s Tobias Harris and Victor Oladipo and Utah’s Trey Burke — will join the 34 players who are in the mix to make the USA Olympic Team next year.

The three-day minicamp will feature non-contact practices and the 2015 USA Basketball Showcase, an exhibition on August 13 at 10:30 p.m. ET between participating USA National Team members at the Thomas and Mack Center.

Burke averaged 12.8 points, 4.3 assists and 2.7 rebounds per game during his sophomore campaign with the Utah Jazz.

Glenn Robinson III is playing with the Atlanta Hawks in the NBA Summer League and he’s reached double figures in all three appearances. He had 13 points, three rebounds, two steals and two blocks in a 71-70 win over Golden State — a performance that included the game-winning free throws. He followed that up with 10 points and four rebounds in a loss, but did show off this impressive 360-degree dunk.

On Wednesday night, Robinson tallied 11 points and four rebounds off the bench in 20 minutes. The second-year forward will be battling to earn a training camp invite with the Hawks.

“I thought he gave us a spark,”Hawks assistant coach Kenny Atkinson told the AJC. “He is obviously a very talented guy. He showed he can handle it. He hit a three. He’s got NBA size for his position. That is the intriguing thing about Glenn. We are going to keep an eye on him. I’m glad we brought him in and I’m glad we are going to get a good look at him.”

Robinson is focused on demonstrating his ability on the defensive end of the floor to make the roster, which is in flux after the loss of DeMarre Carroll.

“It definitely did,” Robinson said. “I talked to my agents and they brought me in three days ago. That was kind of a surprise but at the same time this team needs defense, a guy who can step out on the court and lock down. They have shooters, guys who can score. I know that might not be my role at first but if I am lucky enough to make this team and have an opportunity defense is really going to be the thing that gets me on the court.”

Nik Stauskas was traded on draft night, but a fresh start might be best for him.

He’s sitting out the Las Vegas Summer League with an injury, but he’s excited for a fresh start with the Sixers.

“This is what I was born to do,” Stauskas told Philly.com. “I’m extremely hard working and that’s the only reason I got here, just because of my hard work.

“So hopefully the fans of Philadelphia understand they are getting a kid who is going to work his butt off to do everything he can to win games.”

Stauskas is in Las Vegas watching his future teammates, but thinks he will be a good with with his new team.

“Shooting is my bread and butter, but in college I feel like the majority of my work was done in the pick-and-roll with the ball in my hands and just be free to operate and do what I want,” Stauskas said. “Obviously, playing in the NBA is a different level and it’s going to take adjustments to have that same efficiency and effectiveness in pick-and-rolls and I definitely think that I’m that type of player that can play off the dribble and not only score for myself but get other guys involved as well.

“There were numerous times last year that I would go on the floor and I was just targeted right away and the teams would attack me. The adjustment of physicality and defense is an adjustment period and I’m just getting better every day on it.”