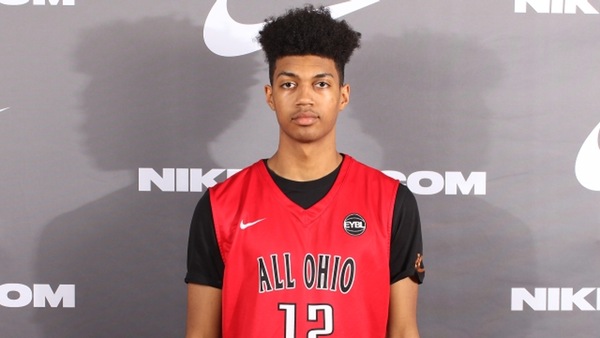 “(Michigan) offered (Monday) night,” Watson said. “I was really excited because it is a school that I’ve wanted to go to for a long time, it’s kind of a dream school for me so I was just really excited.”

Ibi Watson is no stranger to Ann Arbor.

The Pickerington Central wing guard has visited Michigan several times over the past two years for games, camps and other unofficials. The Wolverines’ best player, Caris LeVert, even went to his high school and he considers him a role model.

But it wasn’t until Monday evening that Watson’s dream could become reality.

“(Michigan) offered last night,” Watson said in a phone interview on Tuesday. “I was really excited because it is a school that I’ve wanted to go to for a long time, it’s kind of a dream school for me so I was just really excited.”

Watson didn’t commit on the spot, but he didn’t wait long. He called up Michigan’s coaching staff on Tuesday and pledged to join John Beilein’s 2016 recruiting class. In an era of recruiting that’s anything but straightforward, Watson didn’t beat around the bush.

“When they offered I just felt like it was the place for me,” he explained. “I knew it was going to be a good fit so I decided to not wait and just go ahead and decide to commit.

“I just think they have such a great coaching staff. It’s a great program and their player development is so good that it was just hard to not want to go there.”

“It’s a great program and their player development is so good that it was just hard to not want to go there.”

The Michigan coaching staff, which has been searching for players who are ‘knocking on the door to attend Michigan’, was ecstatic when they heard news of Watson’s commitment.

“They were really excited,” Watson said. “I talked to the whole coaching staff on the phone and they were all really excited for me.”

Bacari Alexander was one of Watson’s primary recruiters throughout the process, but he’s grown close to the entire Wolverine coaching staff.

“They are all great,” he said of the Michigan coaches. “I talk to Bacari (Alexander) a lot along with Coach (Jeff) Meyer and Coach LaVall (Jordan). They were all on me hard and it has been great talking to them. They are great coaches and really down to earth guys.”

In June he attended various elite and team camps across the Midwest. He starred at both of Michigan’s summer camps in Ann Arbor and played his way onto the Wolverines’ watch list for the live-evaluation period in July. Despite knowing that his ‘dream school’ was tracking his progress, Watson wasn’t worried about the pressure.

“Not really I tried to just stay focused and try to play my game,” he said of the pressure of the July period. “Play as hard as I can and I knew things would work out if I did that.”

The mental approach paid dividends. Watson was named MVP of the Best of the South Tournament in Suwanee, GA and quickly earned a scholarship offer from Indiana.

“Watson may have been the most consistent player throughout the entire tournament, ending in him being awarded the 17U MVP,” Hoop Seen wrote. “The 6-foot-6 shooting guard was a threat from behind the three-point line with his shooting ability, but he showed spurts of his sneaky athleticism with some plays at the rim. He consistently hit shots and made smart plays for his teammates.”

Watson followed the impressive first week up with strong showings in Milwaukee and Louisville — many of which came in front of John Beilein — and the rest was history.

“Really probably the main thing is my confidence and aggressiveness,” Watson responded when asked where he’s improved the most over the last six months. “Once I started playing more assertively and physically it really helped my game out a lot.”

Standing 6-foot-5, Watson projects to play the wing in Ann Arbor and could see time at either the three or two positions — filling the void left behind by Tyus Battle’s decommitment.

“They see me as a wing player who can get out and shoot the ball,” Watson said. “Someone who can run in transition, work off of ball screens and stuff like that. Just come in and be a scorer.”

Watson hopes to add strength and improve his ball handling over his senior year, but he’ll be watching his role model in Ann Arbor closely as he hopes to follow in LeVert’s footsteps when he arrives at Michigan as his replacement.

“(Caris and I) are pretty close. He’s like a role model to me. He’s someone who came in unranked and wasn’t really expected to be a college star and he broke out and made it happen.”