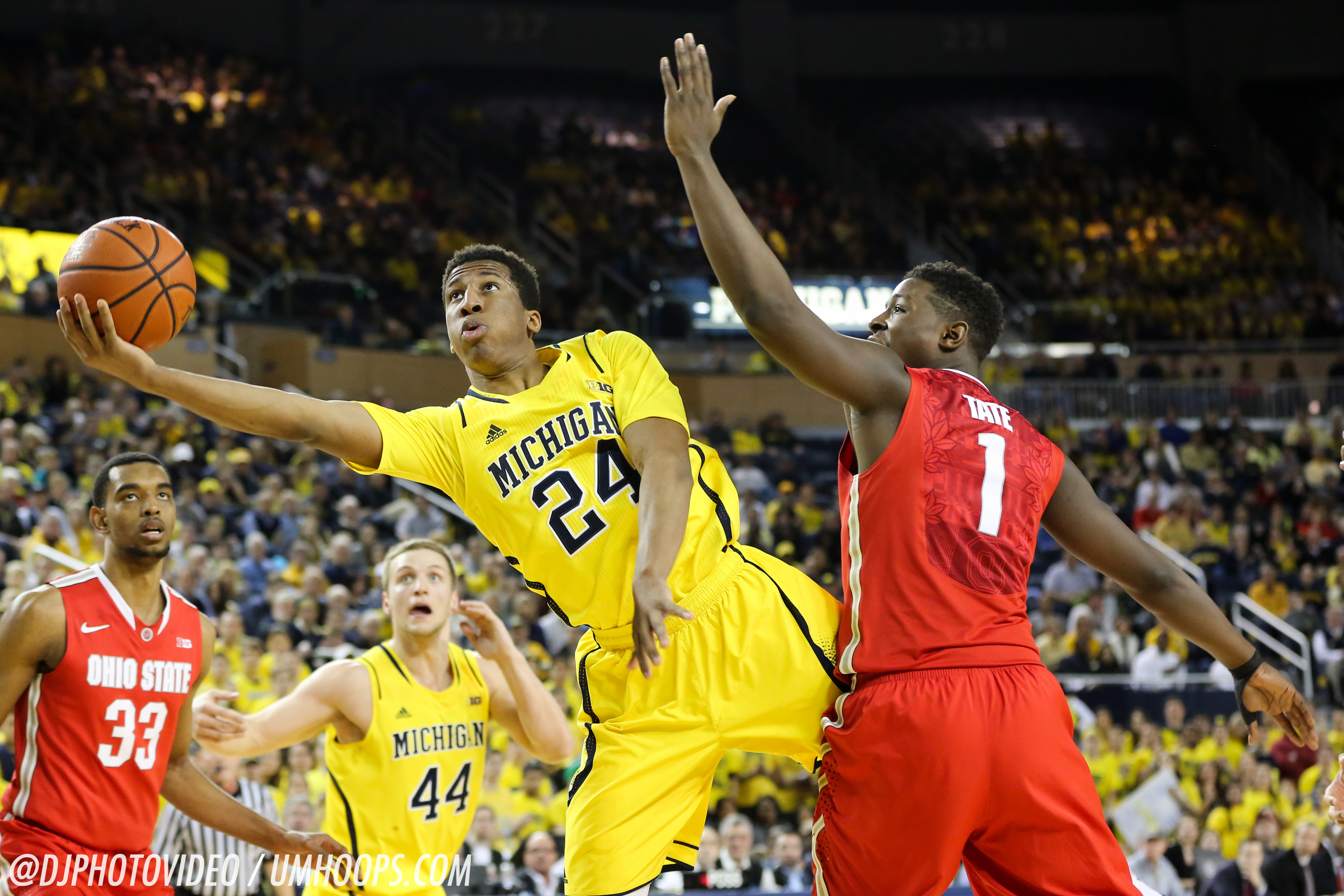 @DAngelo_Vickers: Would you like to see protected rivalries in league play?

There’s no question that I would love Michigan to play Michigan State and Ohio State twice every year, but I also have a hard time seeing how such a setup would really work.

If you go down the list and start pairing up traditional rivals, you will end up with an (even more) unbalanced Big Ten schedule. The real downside to conference realignment is that it has lessened the importance of the regular season conference championship. The Big Ten is a league where I think coaches, players and fans really value the importance of the regular season title — winning one, especially outright — can be even more difficult sometimes than a NCAA tournament run.

On the other hand, with 14 teams already in the league the notion of having a balanced schedule and a true regular season champion becomes more idealistic by the day. With eight single plays already on the schedule maybe we’d just be best off going to some sort of protected rivalries.

Wolverine4: MLive recently had an article about Coach Beilein evaluating and possibly altering his recruiting style. What do you think, if any, changes he might make. How do you see that impacting recruiting going forward and could you see it making a positive impact with higher ranked kids?

I’ve seen questions like this quite a bit and I’m not quite sure how to answer them. On one hand, John Beilein and his staff are constantly adjusting their approach to the game of basketball (note the rise of the pick and roll in Michigan’s offense) and also recruiting. Anyone in business or life really is constantly making adjustments to get better.

On the other hand, Beilein and his staff are a very principled group. They are going to stick to their core beliefs and when a situation like Tyus Battle happens, they’ll move on to the next recruit.

The things that Beilein has stressed about his strategy — looking for players that want to be at Michigan and will unpack their bags on campus — have never really changed and I wouldn’t expect them to any time soon.

The one pretty big change that you’ve seen in Michigan’s recruiting approach this year has been with the class of 2017. Michigan still hasn’t extended offers to 2017 prospects after making a habit of routinely extending several offers to rising juniors on June 15th.

This is one of those classic offseason questions where every year we talk about how this might be the year that John Beilein brings back his famous 1-3-1 zone as a regular defense or Michigan’s length means that it will play a 2-3 zone.

The bottom-line is that Michigan has been predominantly a man-to-man team over the last three or four seasons. The zone looks have been in the playbook, but they’ve been reactive options rather than proactive choices. The Wolverines haven’t been trotting out a 1-3-1 or the 2-3 zone because they think it’s their most effective defense. Instead, they’ve been busting out the zone because the man defense isn’t working and they need to try something else.

I’m sure we’ll see bits and pieces of both looks, but I wouldn’t expect Michigan to rely on either zone defense unless it has to.

@JMuter96: How deep will Beilein go into his bench this year during conference schedule, we seem really deep this year.

This is another classic offseason question. Every roster looks deeper in July or August than it does in January or February.

Don’t get me wrong, this roster is as deep as I can remember for a Beilein team in recent years. The fact that so many probable bench or rotation players on this year’s roster were forced into major starting roles last year due to injury certainly provides Beilein with an unusual luxury.

I expect that will lead to a lot of tinkering throughout November and December, especially with the fairly heavy travel workload (Bahamas, NC State, SMU on the road), but by the time Big Ten play rolls around I fully expect Beilein to be settled on one of his classic eight man rotations. There are only 200 minutes to go around in the college game and I think we should expect Beilein to stick with a core group because that’s how he’s coached throughout his career.

@ks_94: What pct chance do you give Mich to sign Winston? Bridges? Winston and Bridges?

I’ll go with 40% for Cassius Winston as right now I’d say that Michigan and Michigan State are the two schools at the top of the pack. We’ll give both of them a 40% chance, leaving a 20% chance that he ends up somewhere else after his official visits.

As for Bridges, I would go under 10%. I think that Kentucky and Michigan State are the two schools in pole position there and while Bridges continues to list Michigan, he hasn’t quite backed those mentions up. For example, he was listed as an expected attendee for College Practice Camp in June, but didn’t show up. If he makes it on campus for an official visit then we can go from there, but Michigan certainly has ground to make up.

WindsorBlue: Is there still a realistic way of picking up Kevin Huerter? (Seemed like there was a lot of mutual interest there — not to mention a great fit with the Beilein offence — but the Watson commit appears to have dashed that.

There are certainly realistic ways for that to happen. I touched on one in yesterday’s Five Takeaways piece and that was the chance that Huerter could attend prep school and reclassify to 2017. He hasn’t even turned 16 yet which makes prep school a possible option.

Even if he doesn’t prep, I’d expect Michigan to continue recruiting him. There’s also the chance that Huerter could even be seen as a backup point guard option if Cassius Winston were to end up somewhere else. He’s not a traditional point guard, but I think he’s capable of playing the position in a pinch especially if paired in the backcourt with someone like Muhammad-Ali Abdur-Rahkman.

JBlair25: Game clock is winding down in a December game. Down 2. Irvin & Levert fouled out. Who gets the shot? What’s the play?
Derrick Walton Jr. We watched Walton playing at 75% for the majority of last season and never really got a chance to see him take control of this team. With Caris LeVert back, this might not be the year where Walton dominates the ball by any stretch, but he’s certainly who I want with the ball in his hands. We’ve seen Walton hit buzzer beaters before and he hit his fair share of big shots as a freshman as well.

As for the play call, I think you go with a high ball screen and give Walton a chance to work down hill with the option to kick to shooters like Aubrey Dawkins and Duncan Robinson on the wings.