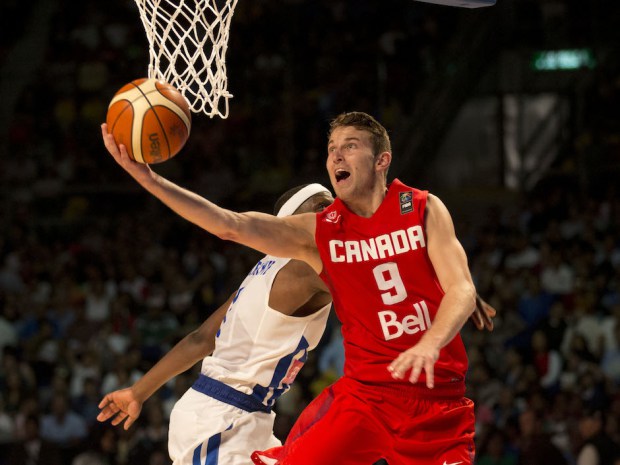 Nik Stauskas averaged 12 points per game with the Canadian National Team in Mexico heading into an important sophomore season in the NBA.

Nik Stauskas has faced plenty of adversity throughout his short NBA career. He was never able to sustain success as a rookie in Sacramento while playing for a handful of different coaches and was promptly traded to the Philadelphia 76ers after his rookie season.

After sitting out the NBA Summer League with an injury, Stauskas returned to action over the last month with Team Canada. The Canadian national team features a host of NBA players including Andrew Wiggins and Anthony Bennett and Stauskas earned the opportunity to make an impact on the roster during this summer’s FIBA Americas tournament.

Team Canada suffered a heartbreaking loss on a phantom foul call against Venezuela — a loss that could cost Canada a trip to the Olympics — and finished with the bronze medal in the event, but it was still a successful month for Stauskas.

He struggled in the Tuto Marchand Cup, a warmup event before the FIBA Americas, averaging just 4.5 points in 19.8 minutes per game while shooting just 2 of 7 inside the arc and 4 of 14 from outside. But Team Canada’s coach, Jay Triano, voiced his support for Stauskas after the event despite his shooting struggles and the backing paid off.

“I’m not concerned with Nik at all, I’m actually really pleased with what he’s done,” Triano told the Toronto Sun.

“I think his energy at the defensive end and his length at the defensive end has caused a lot of guys problems. The international game is full of two guards that can really move and really shoot the basketball. And I’ve been more than happy with the way that he’s guarded. If his offence is struggling it might be because he and I have put a huge emphasis on his defensive play. But good shooters don’t lose it. He’s going to find his rhythm and I’m pleased with what he’s done so far.”

“I’m seeing now with him the way that he played when we started this program three years ago when he came into camp,” Triano said last week. “He was creative, he was able to attack the basket and make plays, he wasn’t just a shooter.

“He’s a shooter, but he can also make plays for other people and he can also attack the basket.”

Stauskas finished the event on the sidelines after a bout with food poisoning. He was hospitalized before the semifinals and scored just 2 points and played 15 minutes in the devastating loss to Venezuela and sat out the bronze medal game.

Before the bittersweet finish, Stauskas put together a string of impressive performances. He scored in double figures in all four of Canada’s second round games going led by a 16 point performance against Panama.

The strong performances with the Canadian National Team set Stauskas up for what feels like a crossroads in his NBA career. He should have more opportunities in Philadelphia this season, but he’ll need to prove that he can not only be a legitimate shooter, but start to demonstrate some of the pick and roll skills that he displayed in Ann Arbor.

To be fair to Stauskas, he did improve as the year progressed in Sacramento. He shot just 26% on three-point attempts before the All-Star break as a rookie, but once George Karl came aboard, he improved to 42% after the break. His improved finish and solid showing at FIBA Americas should help him enter the 2015-16 year with some added confidence as he joins the 76ers.