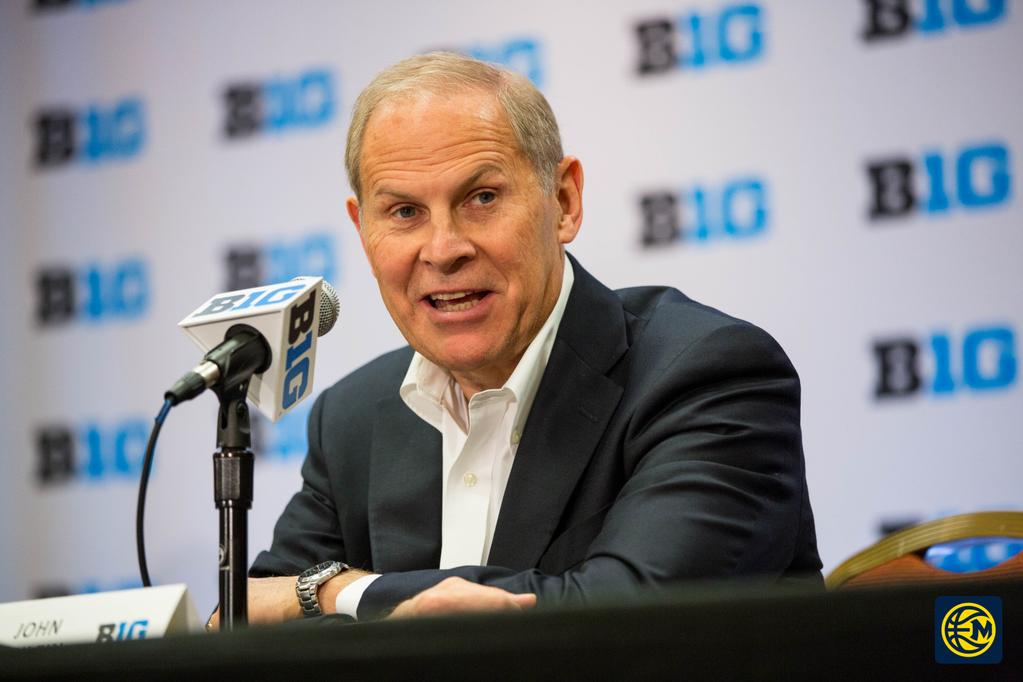 Here’s the full video of his comments, via the Big Ten Network:

COACH BEILEIN: It’s great to be back at another media day. I mean that. It’s good to have enthusiasm, start talking basketball again. We are excited, as we’ve been every year. I think we approach the beginning of the season with great excitement. We have a team and I mean a true team, with Caris LeVert is, obviously, a spectacular talent. However, he right now is one of the greatest teammates you could ever have and sees his role as being a leader on this team. And everybody else — Spike and everybody else sets that tone, and we just love going to practice every day. The mentality is terrific. So now we’ve just got to continue to try to get better, stay united as a team, and who knows what can happen this year.

Q. John, I know last year was difficult to go through with all the injuries. But now that you’re through it, do you look back and think how great that was for Aubrey players like that to get so much time and experience?

COACH BEILEIN: As you know, it is painful to go through that. It is painful for them as well. We had a lot of close losses, and right now you can see the effect has been terrific. They’re hungry. But we make no mistake about it and say we’re not close. You know, we’re not going to talk about it. We’re a few wins here or a few wins there. No. We have a lot of gap to make up with this young team. But without question, now that we look back on it, it was very beneficial for all of us, including the coaching staff.

Q. Coach, with Caris LeVert having missed, obviously, a big chunk of the season, how has he been progressing this off-season as he rehabs and comes back?

COACH BEILEIN: He’s been rehabbed quite a bit obviously since the injury. It’s a long time, and we really erred on the side of caution to give him even more time in rehab. But he’s running faster, jumping higher, stronger than he’s ever been. That’s the good news, is that he has spent so much time building his body up while he was rehabbing the foot. So it really is exciting to watch right now. And I think of this — you know, he’s just 21 years old as a senior, just turned 21 in August. So he is still — I think he’s still developing as a player at this level and then beyond.

Q. Coach, those guys who got to play last year while some of the other guys were injured, do you expect that experience to pay off just in terms of depth, or do you expect them to make as big an impact as guys like Caris and Derrick are coming back?

COACH BEILEIN: I think everyone is separate. We have to get these young men that will probably have to move back in their minutes and still get comfortable with a 5-, 10-, 15-, 20-minute slot, and some of those same young men might be in the 30-, 35-minute slot. So we’re going to determine that out, and it is great to have depth. And it gives you all kinds of choices. Sometimes that’s tough too. We’re trying to still figure things out, and we’re really looking at these six weeks of preseason as a time to try and figure it out and then start the season. You still don’t have all the answers. You try to evolve during the season as well.

Q. Coach, you obviously have a tremendous amount of depth in the perimeter. But talk about the role of Kam Chatman in his sophomore year and how he can be kind of an X factor filling that stretch for you.

COACH BEILEIN: He’s made great strides so far. He has — his shooting has really improved. His body continues to improve, like they all should at this time, with another year of weightlifting and another year of quickness training. Just his knowledge of you can accomplish a lot more if you maybe try to do less a little bit. Just his general understanding of the game and his body and his ability to shoot the ball right now that has really improved