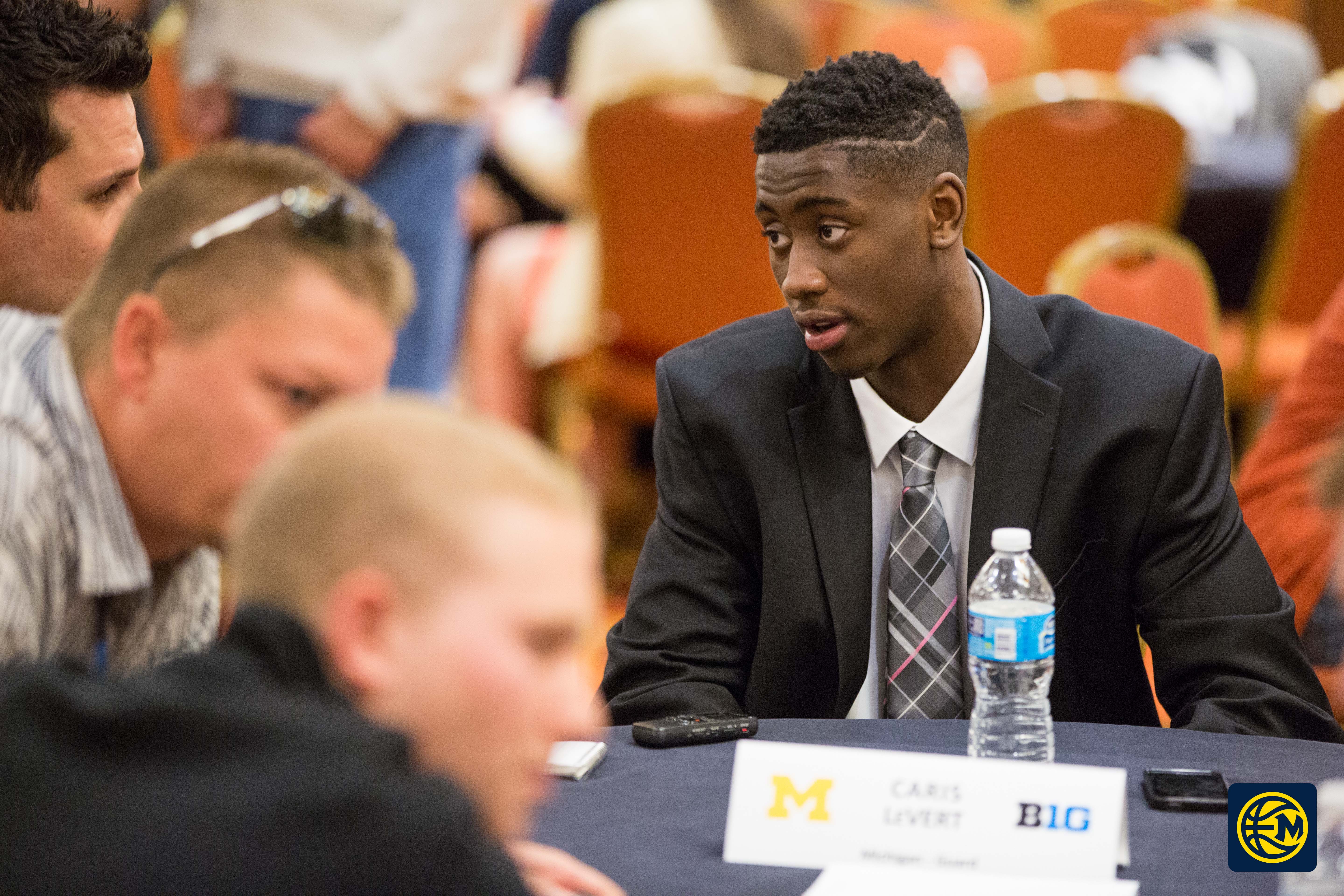 In a near-mirror image of last fall, John Beilein, Caris LeVert and Spike Albrecht made the trek to Chicago to represent Michigan at Big Ten Media Day on Thursday morning. Once again, the trio fielded questions of offseason development and expectations for the upcoming season. Here are five things we learned from Michigan’s head coach and senior guards.

ROSEMONT, Ill. — In a near-mirror image of last fall, John Beilein, Caris LeVert and Spike Albrecht made the trek to Chicago to represent Michigan at Big Ten Media Day on Thursday morning. Once again, the trio fielded questions of offseason development and expectations for the upcoming season.

The only difference, really, came in the team they discussed. Rather than being a young team with unknown talent, the Wolverines are one of the more experienced teams in the conference.

Though expectations are tough to pinpoint on such a potent-yet-unproven squad, the USA Today Coaches poll lists the Wolverines as the top vote-getter outside the top 25, behind No. 3 Maryland, No. 13 Michigan State, No. 15 Indiana, No. 17 Wisconsin and No. 24 Purdue, but not out of the mix to contend for the Big Ten title.

At Media Day, however, the focus was on current reality over expectations. Instead of trying to match consecutive Elite Eight appearances the team saw in 2013 and 2014, Michigan is simply trying to stay healthy and succeed. Just three weeks until the 2015-16 season begins, here are five things we learned at Big Ten Media Day.

Michigan ‘not close’ to where it wants to be

Conventional wisdom would suggest the Wolverines could expect tremendous improvement off of last season’s 16-16 performance. With all but one player returning, improved health from core players that suffered injuries last season and another offseason to get stronger, all signs point to Michigan bouncing back.

But at Big Ten Media Day, Michigan coach John Beilein was less eager to call it a comeback.

“They’re hungry. But we make no mistake about it and say we’re not close,” Beilein said. “We’re not going to talk about it. We’re a few wins here or a few wins there (away from competing) — We have a lot of gaps to make up with this young team.”

With a long season ahead, Michigan is instead focused on continuing its development, stealing a page from Michigan football coach Jim Harbaugh’s book and trying to get better every week.

“The mentality is terrific. So now we’ve just got to continue to try to get better, stay united as a team, and who knows what can happen this year.”

On a day filled with optimism from every team, the Wolverines are using last season as a lesson in tempering expectations — for now, at least.

LeVert is back, and better than ever

The fate of Michigan’s season very much hinges on the health and progression of LeVert. Projected to be a lottery pick this time last season, the senior guard looked the part before breaking his foot in January, sending the Wolverines’ season into a tailspin.

LeVert chose to stay for another season, took his time with rehab and, apparently, made the right decision.

“We really erred on the side of caution to give him even more time in rehab,” Beilein said. “But he’s running faster, jumping higher, stronger than he’s ever been. That’s the good news. … He has spent so much time building his body up while he was rehabbing the foot. So it really is exciting to watch right now.”

After leading the team in points, assists, rebounds, steals and just about every statistical category, LeVert’s return in any capacity is a welcome sight to the sore eyes of Michigan fans.

But even stronger and better than before? That’s a scary thought for opponents.

“I think of this — you know, he’s just 21 years old as a senior, just turned 21 in August,” Beilein said. “So he is still — I think he’s still developing as a player at this level and then beyond.”

Depth is a blessing, but it can also be a headache

Aside from Max Bielfeldt, who transferred to Indiana for a fifth year, the Wolverines bring everyone back from last season. More impressively, with LeVert and Derrick Walton missing plenty of games with injuries, just about everyone in the lineup has played meaningful minutes.

That experience will help Michigan at various points throughout the long season, but for now, it also creates a playing time dilemma.

“We have some young men who probably have got to move back in their minutes to the 5, 10, 15, 20-minutes slot and some young men will be in that 30, 35 minute slot,” Beilein said. “So we’re determining that out. It is great to have depth and giving you all those choices. Sometimes that’s tough, too. We’re trying to still figure things out.”

Though Beilein was mum on which players would move into which roles, Michigan’s six-member sophomore class is likely to see less action this season. Beilein cited Aubrey Dawkins, Kam Chatman and Muhammad Ali Abdur-Rahkman and redshirt sophomore Duncan Robinson as among the team’s most-improved players, but knows sacrifices have to be made somewhere.

“We’re going to use six weeks of preseason as a time to try to figure it out,” Beilein said. “When you start the season, you still don’t have all the answers.”

As usual under Beilein, Michigan features a guard-heavy lineup. But after finishing near the bottom of the conference in offensive and defensive rebounding percentage in 2014-15, the Wolverines’ success very much goes through the team’s forwards.

While Albrecht said Wilson is almost unrecognizable after adding muscle this summer, and Beilein said Wagner and Doyle are hyper-fast learners — even comparing the German freshman to Zack Novak, it was clear Thursday that Donnal is the most-improved of the big men and could be poised for a breakout year.

“It’s very undetermined right now,” Beilein said of the rotation. “Everybody’s making great progress. Mark Donnal has really done well. He’s understanding that he has to play really hard every minute. That he has to be a Tyler Hansbrough type of mindset when he plays. He’s not as gifted athletically as some others as far as jumping, he can run, he can be a very good passer, but if you never get the ball because you’re not getting rebounds

Added LeVert: “Our bigs have really made huge improvements – Mark Donnal especially. I know Mark was really sick going into the season last year so he lost a lot of weight. This year, he’s been really healthy and he’s made great improvements. His jumper has been really good and he’s been rebounding the ball well and running the floor well.”

Spike’s got style, both as a leader and in fashion

Sporting a bowtie and his trademark boyish smile, Albrecht was one of the stars of the show in Chicago. Three years after joining the Wolverines as a barely-known bench player, there’s was no question Thursday that Albrecht has developed a style of his own.

“It’s my first bowtie, it took me 20 minutes to figure it out,” Albrecht said. “I actually had to get a Michigan State SID to help me with it, it was a struggle. But senior year I’ve got to change it up.”

Suddenly the leader and oldest player on the team, Albrecht has been changing things up on the court, too. Despite offseason hip surgery that sidelined him until September, Albrecht, alongside fellow senior Caris LeVert, is pushing himself to become more of a vocal leader.

“We both amped up our leadership roles and try to hold others accountable,” Albrecht said. “You can’t be afraid to speak out and say what you’re thinking or feeling, and that goes for Caris and myself, too.”