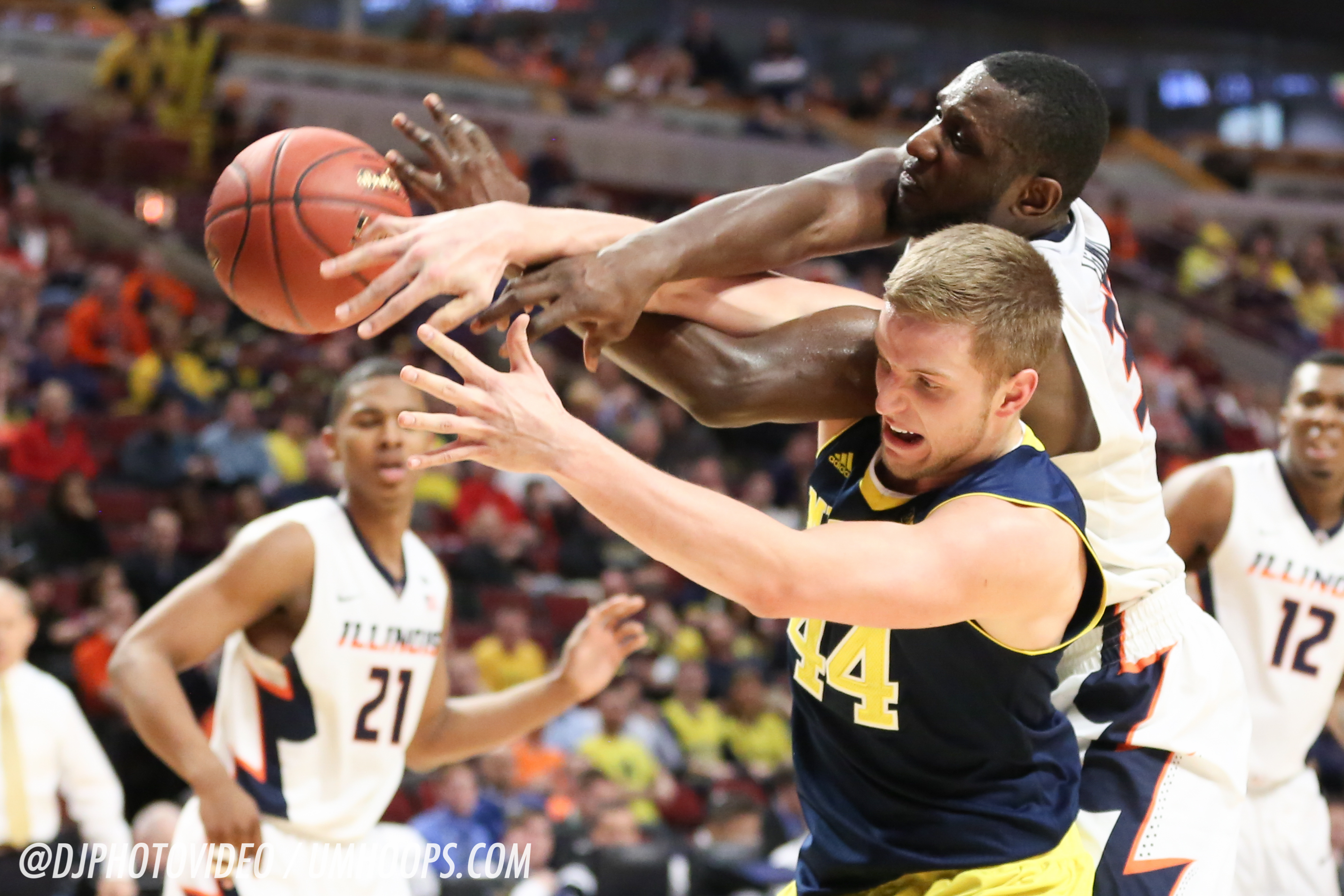 Just 50 feet away from where Michigan coach John Beilein discussed the stockpile of talent the Wolverines bring back this season, the only player not still on the team from last season discussed his new life away from Ann Arbor.

ROSEMONT, Ill. — The Michigan men’s basketball team didn’t have to look far to see what it gave up at Thursday’s Big Ten Media Day.

Just 50 feet away from where Michigan coach John Beilein discussed the stockpile of talent the Wolverines bring back this season, the only player not still on the team from last season discussed his new life away from Ann Arbor.

Bielfeldt’s tie was blue, but his heart had become cream and crimson. With two Big Ten titles, two Elite Eight appearances and a Final Four trip at Michigan under his belt, Max Bielfeldt was eager to add to that total — but as an Indiana Hoosier.

After spending four years figuring out his place in Beilein’s system, the graduate transfer forward is tasked with finding a way to make it work under a new coach in the same conference, but this time he only gets one season to do it.

“I have nothing but positive memories from my time at Michigan and I would cheer the crowd if I could,” Bielfeldt said. “But it’s definitely going to be a weird experience and kind of one-of-a-kind thing I’ve never really had to deal with.”

By now, Bielfeldt’s exit from Michigan is well-documented. Despite a breakout season that saw the 6-foot-8 forward set career highs in point (5.1) and rebounds (3.1), Michigan coach John Beilein had his eyes on incoming recruits.

With fewer scholarships available and a quicker learning curve than football, hockey or baseball, fifth-year seniors are a rare breed in college basketball. Candidates are often compared directly to the recruits on what they can bring to the program — despite years of additional experience.

Such was the case for Bielfeldt, and when weighed against potential recruits like Jaylen Brown, Moritz Wagner and Kenny Williams, he was the odd man out.

Without another commitment, Beilein wasn’t saying no to Bielfeldt, but after six weeks of no decision, he certainly wasn’t shy to tell Bielfeldt to ‘cover your butt” in the process and look at other schools.

Bielfeldt did just that, and with Michigan’s May 1 graduation date fast approaching and still no concrete plans from Beilein, Bielfeldt decided to move on.

“Coach Crean’s definitely a more passionate guy, while Beilein is more of a, I’ll use the word ‘Mastermind,’ sitting back and trying to see the big picture and weigh things out.”

Beilein’s policy had long been to disallow transfers within the Big Ten, but Bielfeldt was awarded a waiver, and chose Indiana over Iowa State, Nebraska, Stanford and others.

“I just really got along with Indiana,” Bielfeldt said. “The coaching staff holds their players to the highest standard, and I knew for one year, they could probably get the most out of me that anyone possibly could.

“They were really willing to have me be in there and be that veteran voice that can have that ability to show how it’s done.”

With only one year of eligibility left, maximizing what he and his team could do was a must for Bielfeldt. The forward battled injuries and was used sparingly in the first half of his tenure at Michigan, but showed promise in his final season, averaging 5.1 points in 14.5 minutes per game.

Now, after the Hoosiers dismissed forwards Hanner Mosquera-Perea, Emitt Holt and Devin Davis from the program and with Thomas Bryant and Collin Hartman battling injuries, Bielfeldt’s second chance to succeed in college basketball very well could be his best one.

To do that, however, he’ll need to learn quickly. Bielfeldt said Thursday he already noticed habits he needs to kick under the new system, but has also noticed the instinct-based coaching style of Crean allows him to learn quickly.

“Coach Beilein is more of a teacher,” Bielfeldt said. “He’ll want you to be able to sit in the film room for an hour and be able to describe every cut and name it something so everyone has their own language, whereas (Indiana coach Tom) Crean will kind of just throw you out on the floor and have you run stuff and kind of coach while he goes.”

Beilein is known by his players for planning out every minor detail in the team’s practice and workout schedule a month in advance, so when Bielfeldt gets a text from Crean saying the team has the day off just a few hours before practice, the difference between the two can be glaring.

“It’s very bizarre and different to compare the two coaching styles,” Bielfeldt said. “Coach Crean’s definitely a more passionate guy, while Beilein is more of a, I’ll use the word ‘Mastermind,’ sitting back and trying to see the big picture and weigh things out.”

No longer possessing the luxury of time to learn a system over a season or two, though, Bielfeldt knows Crean’s spontaneity will help Bielfeldt learn quickly.

He also knows that, after four years at Michigan, Bielfeldt is ready to turn the page and just play basketball again.

“At Michigan, I was a part of some incredible teams,” Bielfeldt said. “I got some great experiences, met some awesome people… but it’s just about where I am now. What I do today and this week to develop is what matters, and that’s at Indiana.