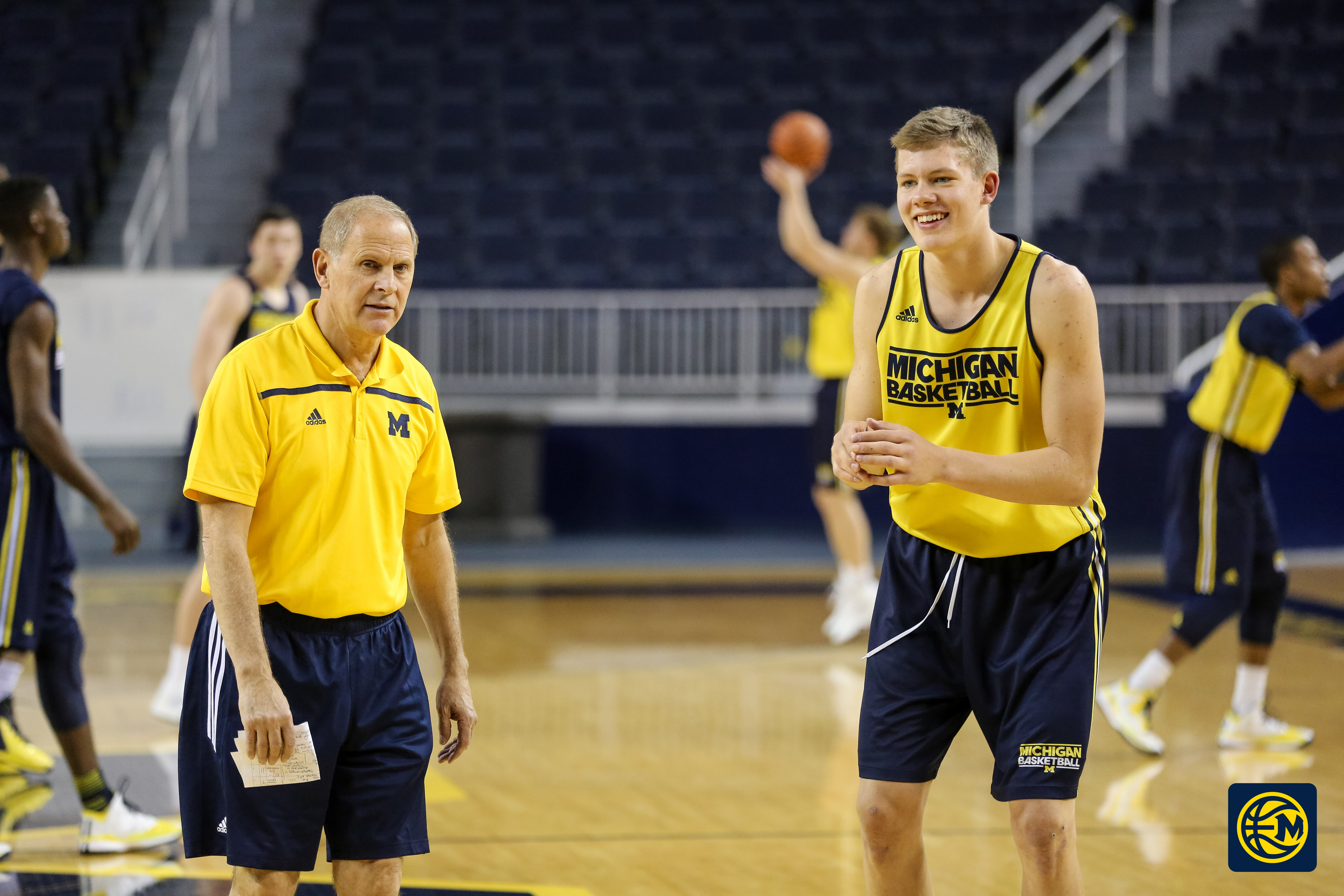 Just two weeks away from the beginning of the 2015-16 season, the Michigan men’s basketball team addressed the media Thursday after a long and busy offseason.

Just two weeks away from the beginning of the 2015-16 season, the Michigan men’s basketball team addressed the media Thursday after a long and busy offseason.

Though the team struggled through injuries and inexperience to a disappointing 16-16 record last season, there were plenty of familiar faces at the Crisler Center. The Wolverines return 13 players from last season, and have plenty of talent and experience at every position — more than what could be said last season.

After conducting interviews and watching an hour of practice, here are five key takeaways.

Moritz Wagner is learning his way to success

It remains to be seen what impact freshman forward Moritz Wagner can have with Michigan this season, but if Michigan coach John Beilein’s praise Thursday was any indication, fans won’t have to wait long to find out.

One of just two newcomers on the team along with walk-on freshman forward Brent Hibbits, Wagner has impressed the coaching staff by being a quick learner. Moreover, at 6-foot-10.5 and bulking up to 228 pounds, the growth in his game can mean big things down low.

“Moe is exceptional,” Beilein said. “Some guys, once they get past the addition and subtraction, they sort of stop. I don’t see any stop in Moe’s learning curve right now.

“He’s really a talented young man. You’re going to see a moment here (where you’ll think) ‘Wow that was awkward’ and then ‘Oh my goodness did he just do that at 6-foot-10.5?’ Just enjoy it.”

Beilein marveled at how unfazed Wagner has been despite moving to a new country, learning two new positions and adjusting to college. That adaptability could be seen in practice, when Wagner — despite being a little slower or the odd man out of some drills — got better and more comfortable with each repetition.

The coach wasn’t sure when, or if, Wagner would see the court this season, but Beilein knows that, at the current rate of learning, it won’t be long.

“I don’t know when it’s going to come around,” he said. “But we just love coaching that kid so much.”

Zak Irvin will be just fine

After a strong finish to the 2014-15 season, junior forward Zak Irvin joined fellow team leaders Caris LeVert, Derrick Walton Jr. and Spike Albrecht and fell victim to the injury bug. A fall in five-on-five open gym injured his back and he’s been sidelined since surgery on September 10th.

The timetable is still unclear on Irvin’s return, but both Beilein and Irvin said they expect him to return shortly after the season begins. Though he averaged 17.3 points, 6.9 rebounds and 3.3 assists in his final seven games last spring, Irvin knows returning to game action is a process.

“I’ll definitely have to earn everything,” Irvin said. “But it’s nice to see that we’ll be able to compete at every position. That’s just going to make us better.

“I was able to end the season last year pretty good — pretty confident about myself. Then my workouts were going pretty well, so obviously, this is tough to go through. But everything happens for a reason. I’ll be better after this.”

On Thursday, Irvin was beaming with optimism. He noted that he was “pain-free,” and participated in light shooting, conditioning and ball-handling drills.

Perhaps more notably, however, was Irvin’s vocal presence at practice, where the formerly-quiet player could be heard encouraging teammates and helping with drills from all corners of the Crisler Center.

Aubrey Dawkins can be a leader

The success of the Wolverines hinges on the performance of their “Core Four,” the group of upperclassmen that includes junior guard Derrick Walton Jr., junior forward Zak Irvin and senior guards Caris LeVert and Spike Albrecht. But a fifth player may be on the verge of joining that group — Aubrey Dawkins.

Dawkins, who shot 48 percent from the field, 43 percent from 3-point range and averaged 10.7 points per game in the second half of last season, made substantial strides in the offseason, earning praise from Michigan coach John Beilein as the team’s most-improved player thus far.

“He’s done really well,” Beilein said. “You’ll notice his skill level is much different. He’s making passes and assisting. He’s seeing the floor much better, his defense is getting better. I don’t know if his shooting could have gotten better, (but) his overall feel for the game has improved.”

Added Dawkins: “My IQ, court awareness are much better. My skills have gone up too, especially my ball-handling, but slowing the game down has benefitted me the most. … I don’t feel like I’m panicking or rushing when things don’t go according to plan.”

That court awareness was prevalent in practice as well, as Dawkins was a vocal and physical leader in just about every drill.

With similar size and skill set as Irvin and LeVert, he might not see as much game action, but improved vision and presence on the court could make Dawkins a key contributor as the season wears on.

As managers, coaches and players hustled between drills and operated practice, a large whiteboard overlooked the action from the sidelines. Despite his relaxed and education-based coaching style, the whiteboard was Michigan coach John Beilein’s way of keeping score.

He wasn’t tracking points, though. As practice began, the Wolverines rolled out a 14-category scoreboard to evaluate players during the practice on just about everything but points. Points were awarded, but the categories — such as ‘first to the floor,’ ‘value the ball’ and ‘talk’ — were designed to not promote scoring or tangible results, but effort.

The points would appear arbitrary or to simply help playing time decisions, but before practice began, the team gathered around as junior guard Andrew Dakich handed a shiny, wrestling-style belt off to junior forward Sean Lonergan for winning the practice scoring title the day before.

With more depth and competition in practice than last season, Beilein is adding intrigue to the position battles, and it seems to be working.

Since receiving the keys to the Michigan offense his freshman season, junior point guard Derrick Walton Jr. has had the tough task of trying to match the work of past Michigan point guards like Darius Morris and Trey Burke.

Now, as one of the team’s few upperclassmen, that task also includes being a leader, not just a playmaker.

“My position calls for it,” Walton said. “I don’t think it’s a huge role change, so I’ve just embraced it and tried to take it in stride. That’s making all the difference for me.”

Calling the opportunity to run the offense through him a “blessing,” Walton showed glimpses of following Burke and others — averaging 13.8 points, 5.4 rebounds and 3.2 assists in his first five games last fall — before a nagging toe injury slowed Walton’s production, coupling a decline in points and assists with an increase in turnovers and missed defensive assignments.

Now, after a summer of studying the past Wolverines and fully recovering, Walton is ready for a fresh start and to take control. But with overuse a large cause of last season’s woes, Walton knows better than to force it in practice.

“I always try to be as efficient as possible now,” Walton said. “Some days I just think about what happened last year and I back off, because you don’t want to overrun your body too early.

“There’s a long season coming ahead, sometimes you need to back off a bit.”