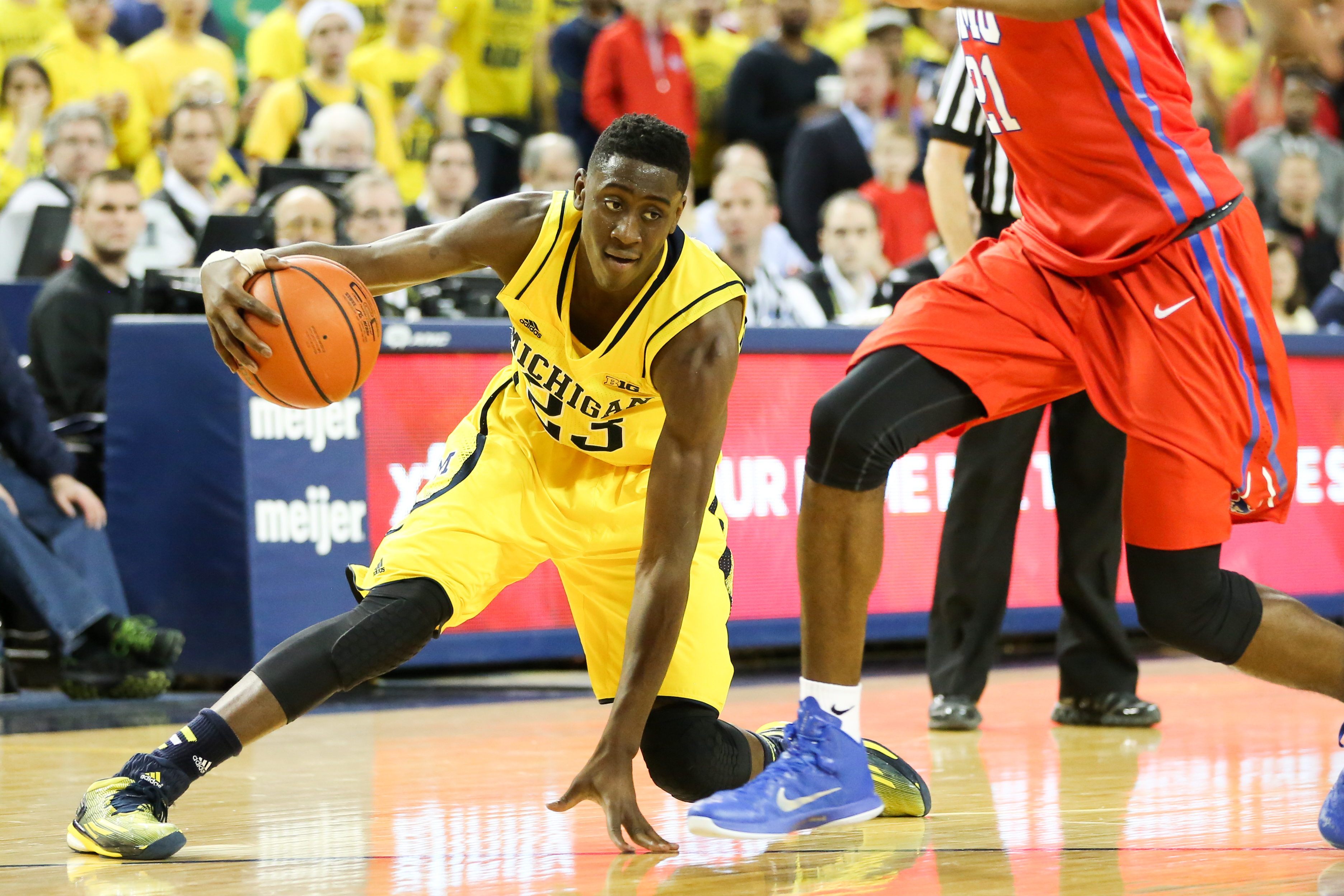 With the start of college basketball just weeks away, we’re breaking down Michigan’s roster player-by-player. Today we break down senior guard Caris LeVert.

When the calendar rolls into June and his four-year career is in the books, Caris LeVert should be the fourth member of his 2012 recruiting class to hear his name called at the NBA Draft. The 6-foot-7 wing guard opted to forgo professional basketball last June and is now back for his senior year.

John Beilein admitted that he never expected to be down to two man class by 2015, but he’s glad he’s able to coach LeVert for his last season.

“We were recruiting guys that could be here for four years (in the class of 2012),” Beilein said at Big Ten Media Day. “Mitch (McGary) was the only one that we felt probably wasn’t a four-year player at the time. I underestimated their DNA, I underestimated their work habits as far as how quickly they got better.”

LeVert isn’t in the league yet, but there’s little doubt that he will be at this time next year. The 6-foot-7 senior’s ceiling is at an All-American level, but to get there he’ll have to answer some legitimate questions about his game.

How do we define expectations for a player who has been sidelined for essentially 6 of the last 24 months and, when healthy, struggled to find the rhythm and confidence in his game that guided him to an incredible sophomore season?

“What I want him to do is to just play really good basketball,” Beilein said. “He does not have to take this load on his shoulders like maybe we assumed he had to do last year, he just needs to play good basketball, and he can have a tremendous year.”

Saying that LeVert carried the load last season is an understatement. When he went down with his foot injury in January he was leading the Wolverines in nearly every statistic imaginable including points, rebounds, assists and blocks. Despite LeVert’s production, Michigan wasn’t a good team last year — even when he was healthy. The Wolverines suffered a four game losing stream to NJIT, Eastern Michigan, Arizona and SMU which derailed what was set to be a promising season.

Living in the offense

Caris LeVert has played three distinctly different roles during three seasons at Michigan and the 6-foot-7 senior could take on a different one as a senior.

As a freshman, LeVert went from planned redshirt to spot defensive stopper in limited minutes. As a sophomore, he was Robin to Nik Stauskas’s Batman. He served as a very good catch and shoot threat when he played off of Stauskas, but he was also an incredibly productive isolation player when the offense bogged down and opposing defenses shut down Stauskas.

As a junior, LeVert was left to be ‘the man’ in Michigan’s offense and his efficiency sputtered. He used over a quarter of Michigan’s offensive possessions and saw his offensive rating fall by over 10 points per 100 possessions. It wasn’t just that LeVert struggled to produce, the Michigan offense that was built around him never found a groove either. Michigan was held below a point per possession of offensive output in seven of the 17 games that LeVert played after being held below a point per possession just eight times during the 76 games of his first two seasons.

“Caris has never struggled to manufacturer a shot for himself,” assistant coach Laval Jordan said on WTKA last week. “But (he can grow) with the pace of the game and understanding what coach wants in the structure of the offense and how to make others’ lives easier as he becomes a facilitator.”

For a number of reasons, Michigan’s offense didn’t work with LeVert at the helm last season and the Wolverines are going to need to find a fix in 2015-16. That fix might simply be doing less and letting his, now experienced, teammates help carry the load.

“(LeVert’s teammates) are better, you can count on them to make the right play and the right decision more than they did last year,” Beilein said. “Last year there may have been moments before he got injured that I was dialing him up no matter what. Even if he was 0-for-10, he was getting that last shot. Now we don’t have to do that this year.”

The ‘stand around and watch LeVert offense’ was present in many of Michigan’s most frustrating games last season. LeVert was very good in Michigan’s losses to Villanova and NJIT — 48 points on 30 shots — but he clearly started to press and things got ugly quickly. He posted an offensive rating over 110 just once after the NJIT loss — a feat he managed 19 times as a sophomore — and averaged 8.4 points while shooting 13 of 47 from the floor in Michigan’s next five losses.

“Trey (Burke) brought a confidence to the group that allowed guys to elevate their games even when they questioned themselves,” Jeff Meyer said on WTKA. “And we’re seeing those same elements from Caris LeVert right now.”

Michigan’s offense relies on the pick-and-roll as much as any team in the Big Ten and the ball screen offense just didn’t flow with LeVert last season.

You can point to any number of factors from his lack of chemistry with his new big men, discomfort as Michigan’s lead man, or inconsistency with the mid-range jumper, but LeVert finished the season behind Spike Albrecht, Zak Irvin, Muhammad-Ali Abdur-Rahkman and Derrick Walton in pick and roll efficiency (including passes) according to Synergy Sports. He managed just a 37 eFG% in the ball screen game and never looked comfortable.

LeVert shot 60% on field goals at the rim last season, but he seemed to settle for jumpers rather than attacking the hoop. An offseason in the weight room could help him become more aggressive.

“Given the timing of the (second) injury, he had a true offseason in the weight room with Jon Sanderson,” Jordan explained. “Last year he was doing a lot of rehab, wearing a boot heading into last year, so he wasn’t able to do lifting on his legs. What we saw this July, August and September was a much more explosive Caris LeVert because he was able to put that time in Jon.” More strength and athleticism is an obvious perk, but judging by LeVert’s shot chart his bigger concern is the mid-range jumpshot. While he’s a career 38.4% three-point shooter, LeVert has continually struggled to make mid-range jumpers. He shot 31% on mid-range shots as a sophomore and 33% on those shots as a junior.

In an offense that is so heavily predicated on the ball screen — and in an era where teams don’t hesitate to soft hedge ball screens and force 18-foot attempts — these numbers simply have to improve. LeVert is a plus shooter from three-point range and an above-average scorer at the rim, but he needs to knock down the 18 foot elbow jumper off the dribble with consistency to open Michigan’s offense.

While he struggled for stretches of last season, it’s important not to forget the sort of player that LeVert was in 2013-14. He put in huge performance after huge performance as Michigan cruised to a Big Ten Championship and an Elite Eight. He was so good that some pundits suggested that he was more deserving of the Big Ten Player of the Year award than his teammate, who went on to be a top ten pick.

LeVert is projected as a top-20 pick in 2016 because he’s capable of doing just about everything on the basketball floor. He has the potential to be Michigan’s best player on both ends of the floor, on the glass, and play three positions for good measure.

He’s facing an incredible amount of pressure as he looks to put the Michigan program back on the right track, but if you ask John Beilein then there’s nothing to worry about.

“If you talk to Caris he’s got a great balance in his life, he’s not focused on the NBA, he’s not in a hurry to do anything,” Beilein said. “He understands the process, he understands God’s will and he’s just working like crazy to do everything he can to just work each day and everything will work itself out.”