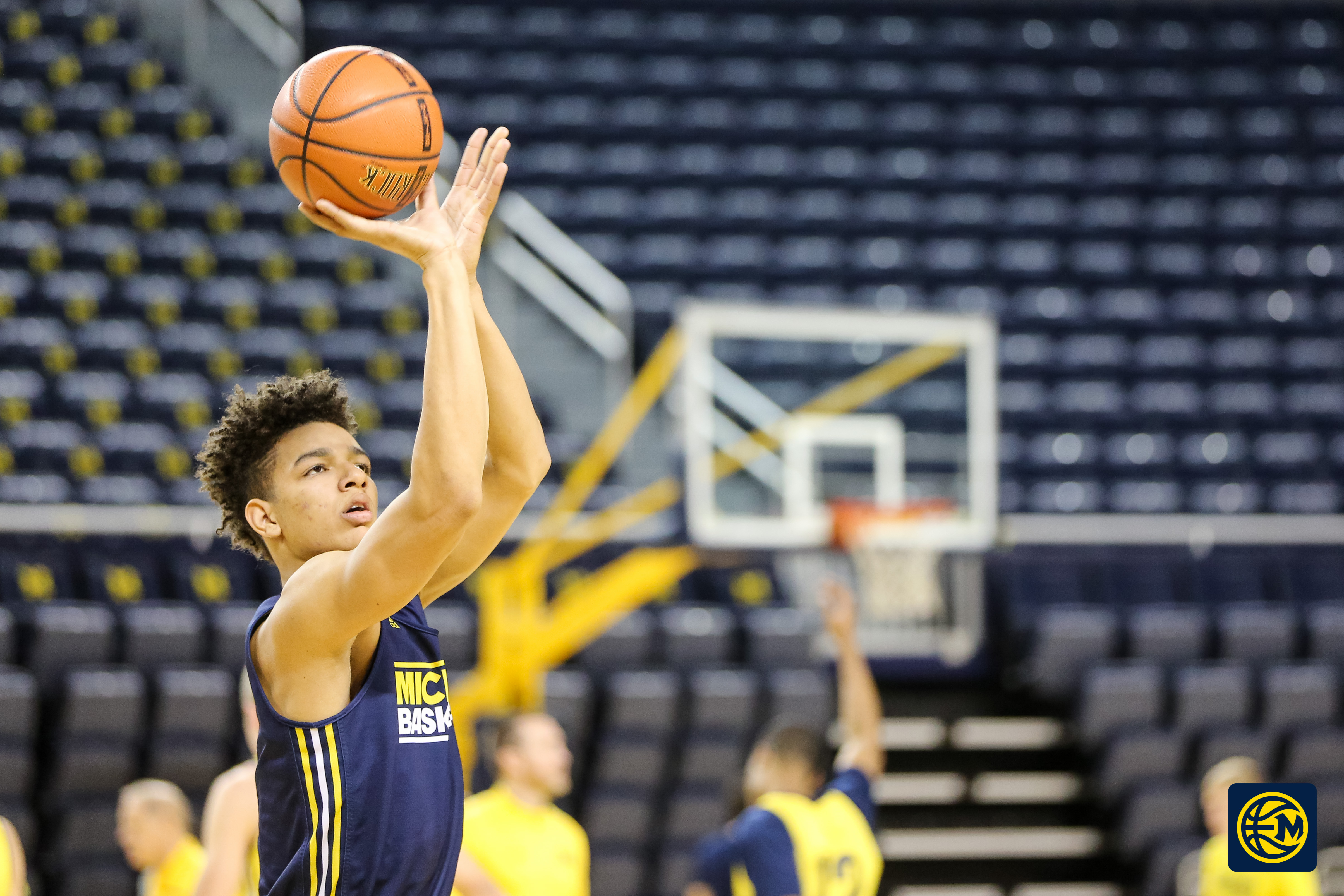 Anyone who saw the 24 minutes that DJ Wilson played last season probably doesn’t expect him to make an impact this season. He played 15 minutes against Division I foes and was 0-of-2 from the floor with two blocks, two rebounds and four fouls. His only made field goal in a Michigan uniform before being sidelined with a knee injury was in a 24-point rout of Division II Hillsdale College.

But even for those who saw Wilson’s lack of production, his potential was obvious. Even as a 6-foot-9, 220 pound freshman with a scrawny long arms — Wilson showed promise on length alone. He suffered a knee injury and shut things down for the season and put his redshirt season to good use. Looking at Wilson now, it appears that the year in the weight room could have been the best thing for his career.

Now he stands 6-foot-10, 235 pounds with a 7-foot-2 wingspan and looks like he’s ready to play Division I basketball.

When Wilson committed to Michigan, he was never expected to be an instant impact player. He had missed significant time during his high school career due to several injuries (most notably a stress fracture of the fifth lumbar vertebra in his lower back) and his slender frame didn’t look ready to make an instant impact by any stretch. But the potential was there which is why he was regarded as a top-100 prospect. With a wing-span measuring in at 7-foot-2 and a solid skillset, Wilson’s best basketball was ahead of him, he just needed to realize it.

The numbers in the photo above speak for themselves. After a year and a half in the gym with Jon Sanderson, Wilson increased his vertical jump by 7 inches, gained 20 pounds, improved his quickness and gained strength across the board.

“He’s 235 now, but he’s trying to play at 235 instead of like he’s 190,” John Beilein said at Michigan Media Day. “Every day there’s something new that happens with DJ and we say okay that’s the right step. There’s some habits that you have (when you add weight) that he’s trying to change.”

For comparison, Nik Stauskas added 12 pounds and 5 1/2 inches to his vertical jump after his freshman year. We aren’t quite sure where Wilson’s numbers started, but his physical development is eye-opening.

Nobody is sure yet if Wilson fits into Michigan’s rotation. The Wolverines don’t have many spots up for grabs and we haven’t really seen Wilson play other than a few hours of light drills in practice, open gym whispers and other general preseason prognostications. In other words, not much.

But the far more interesting question is if Wilson is going to be a rotation player for Michigan, then where will he play?

“What will D.J.’s ultimate position be once we get settled? Will he be at the five?” Bacari Alexander said during a radio interview on WTKA. “If so, we’re talking about a three-headed monster and I’m reminded of previous seasons where you had Jordan Morgan, Jon Horford, Mitch McGary and Max Bielfeldt as an emergency big.”

The easiest route to playing time is at the five spot. There 40 minutes to be split between four players — Wilson, Ricky Doyle, Mark Donnal and Moritz Wagner. Doyle played significant minutes last season and is a safe bet to do the same this year, but there are definitely minutes up for grabs in the mix.

It’s easy to love Wilson as a ball screen defender at the five spot. He has the length to contest and presumably the versatility to switch out onto ball handlers in the pick and roll game. The concerns about Wilson as a center grow as we get closer to the basket. Can he feasibly hold his own physically against bigger and stronger players in the post? That’s the million dollar question.

At the four spot, things are much more crowded. Aubrey Dawkins and Zak Irvin both play the wing spots and look like good bets to play 30 minutes or more per game. To play those kind of minutes, one will be spending extensive time at the four. Kameron Chatman’s natural position is also four and Michigan’s guards could also be pushed up a spot if the Wolverines go with a two-point guard look.

Michigan coaches say that Wilson is destined to play the four in the long-term, but does he have the necessary shooting, passing and ball-handling skills to play there this season?

The Wolverines have really had one true shot blocking threat, Ekpe Udoh, and he transferred after one season under Beilein.

“We can do some things defensively, we can play zone with that type of height if we want to play both guys,” Beilein said. “We have four guys that are 6-9 to 6-10 and how many minutes are out there for them? I would think that would be evolving all year long. “

Given the fact that Wilson’s wing-span measures over 7-foot tall and he added 7 inches to his vertical leap, he has the potential to be one of Michigan’s best shot blocking threats under Beilein.

The versatility, the length and the potential are likely to come down to one thing: can DJ Wilson attack the glass, box out and grab rebounds. We haven’t seen that from Wilson quite yet, but we know he has some ability. He’ll likely face a constant battle to be more physical and aggressive around the basket, especially early on this season.

Michigan has never been great in the middle under John Beilein and last year was one of the worst seasons for the Wolverines inside. They struggled to defend post-up scorers and were ranked 279th in 2-point defense, 203rd in 20-point offense, 325th in offensive rebounding and 175th in defensive rebounding. Those numbers are all ugly. Simply put, Michigan needs to be better on the interior in 2015-16.

Wilson has the potential to add a unique skillset to that mix, but he has to prove he can play with the physicality necessary to produce.