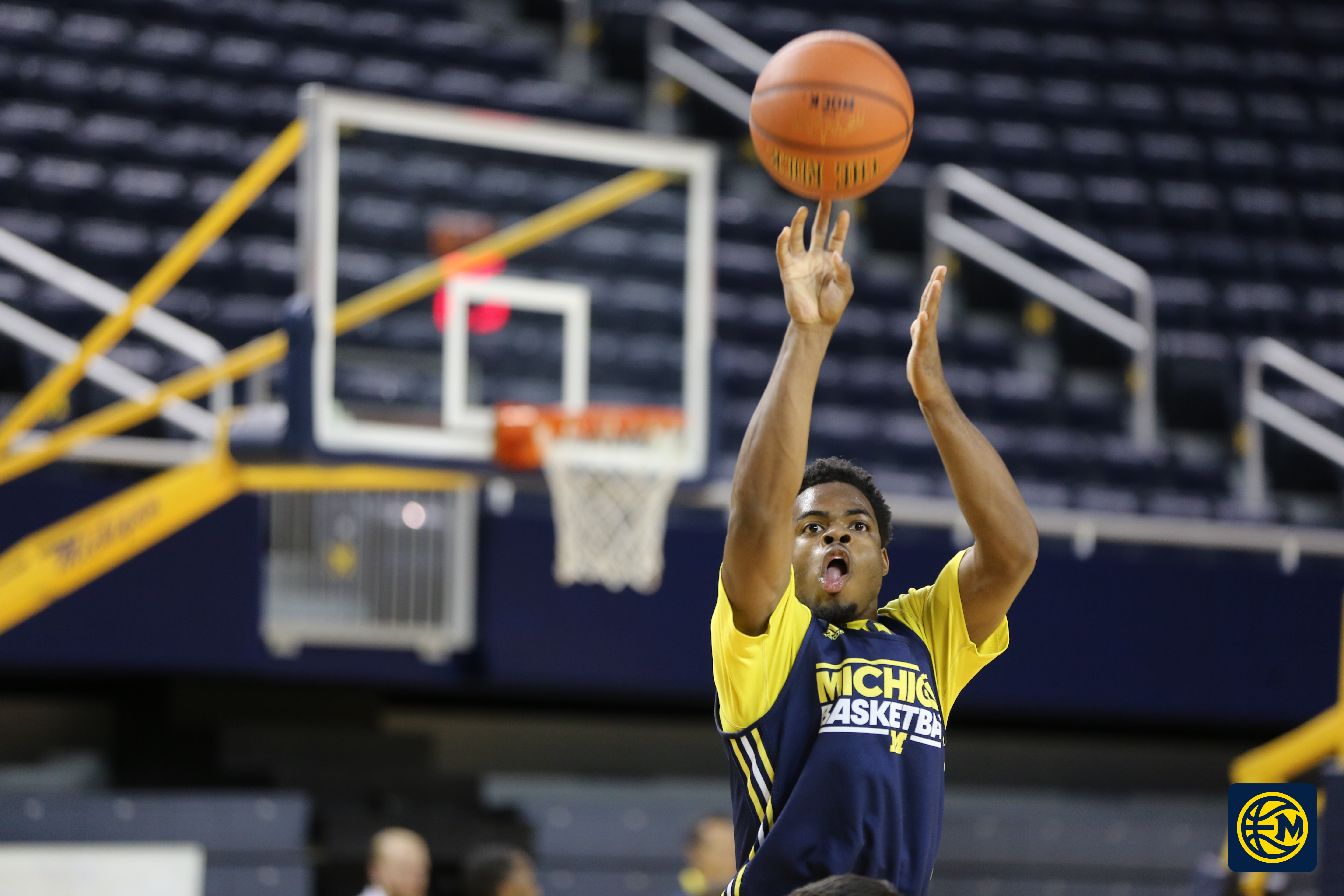 @beigegalaga Will Wilson or Donnal be the first big off the bench to replace Doyle?

The smart money right now, based on comments from Michigan coaches, has to be on Mark Donnal. Donnal has earned praise as Michigan’s most-consistent big in practice and he’s also more experienced than Wilson. Given the recent comments coming from the coaching staff, Donnal should certainly factor into the early season mix.

“One of things that’s really encouraging in the spring/summer, now in our preseason activity, is the emergence of Mark Donnal,” Bacari Alexander said during a radio interview in late October. “Here’s a guy that had some health issues last year, minor injuries, some upper respiratory things, and now he’s ballooned his frame up to 6-9, 240 pounds, solid. Whereas he got down as low as 218-220 last year.

“Right now, he’s probably our most consistent performing big guy up front through the early part of the season.”

Remember, Donnal started the first 10 games of last season as well and statistically his numbers, albeit in fairly limited playing time, look surprisingly encouraging. He certainly needs to improve, but some added strength and a year of experience could be a boost.

@RyanBrown8: How many mins do you expect A) Moritz Wagner to get and B) Muhammad-Ali Abdur-Rahkman?

Here’s the thing with Moritz Wagner and Muhammad-Ali Abdur-Rahkman: they both have unique skillsets on the Michigan roster, but are also facing a log jam of minutes. Abdur-Rahkman has probably the best man-to-man perimeter defensive skillset on Michigan’s roster while Wagner is a near 7-footer that can shoot threes. Both seem like aspects you’d like to incorporate into any rotation.

But start to look at the numbers and the math is difficult. There are 80 minutes to split between Caris LeVert, Derrick Walton, Spike Albrecht and Abdur-Rahkman. LeVert and Walton should both play at least 30 minutes per game and it would be a surprise if Albrecht didn’t reach double-digit minutes given how well he played last season. At that point, you’re looking at fewer than 10 minutes available for Abdur-Rahkman in the backcourt.

With Wagner, it’s a bit more uncertain. There are so many options, but so many questions at the five spot. He’s incredibly raw and skinny, but perhaps it’s worth letting him learn on the job with spot minutes in hopes that he emerges later this season as a contributor.

@mattwithanh: who are the biggest redshirt candidates? Wagner Imo, but have heard suggestions of MAAR. Idk he seems too old to RS. Thoughts?

Wagner is certainly one candidate given his lack of muscle and Abdur-Rahkman has also been mentioned because of the depth in the backcourt (see above). But at the end of the day, how much does someone have to give you to make burning a redshirt pay off? I look back at Caris LeVert in 2013 and he only reached double-digit minutes a handful of times, but it turned out to be the right decision.

“We haven’t even discussed any redshirt possibilities,” Beilein said at Media Day. “Muhammad is not of a young age number one, but he’s got his work cut out for him to get the minutes that he did last year and he knows it. He has some explosion to his game and some speed that we do need on this team. That’s all going to come if he can become an excellent defender on this team then there will always be minutes for him.”

Foul trouble and injuries happen and Abdur-Rahkman is really the only secondary option behind LeVert to guard opposing wing guards with a lot of quickness. It seems likely that there will be at least three or four games where those minutes and invaluable. As for Wagner, he’s young and needs seasoning which will require a similar plus/minus debate among the Michigan coaches. Wagner also would hypothetically be more likely to return to Germany to play professional rather than take a fifth year at Michigan and very few Wolverines who have redshirted have actually played their fifth year in Ann Arbor.

@YpsiTuckyBoy: given the depth, do we see lineups strategically/significantly change based on opponent or do we see the same rotation most games?

It’s easy to look at the roster and consider the possibilities for tinkering on a match-up basis, but that’s simply not the way that John Beilein operates. He likes to play his best players for the most minutes, almost without fail. Now that’s not to say that Michigan will never consider playing some players more in certain games, but I wouldn’t count on it.

Beilein has said specifically that he wants to play his best group of players at least 30 minutes and have them play together as much as possible.

“The downside (to playing too many guys) is that nobody really feels comfortable and everybody looks over their shoulder,” Beilein said this fall. “I want players to play through mistakes and get better through them and I want our best players on the court as much as we can get them out there. You want your best players out there and they have to have a rhythm.”

The thing about trap games is that you never see them coming. Michigan didn’t lose to EMU and NJIT because they were sneaky good teams (they both finished the season ranked around 150th per KenPom), but those losses had a lot more to do with a once in a hundred performance by NJIT and then a Wolverine team that had its confidence fractured and started into a tailspin against Eastern Michigan.

The risk this season is that Michigan will have already played at least four top-50 level opponents (and possibly a couple more in the Bahamas) by the time finals week rolls around in December. You always worry that a few early season losses could create some hiccups, but on paper there’s not really any reasons that Michigan should lose to Delaware State, Northern Kentucky, Youngstown State or Bryant.

@darrenJ19: Which new players (or players with very limited minutes last season) do you see making the biggest impact this season?

Given the way last season ended, there isn’t really anyone on Michigan’s roster who played ‘very limited minutes’ last season. The obvious minutes to replace are Max Bielfeldt’s 15 per game in the frontcourt and I’d expect DJ Wilson to be the top candidate to be the third big man right now. Given the return of LeVert and Walton, almost everyone else should see their minutes decrease this season.

‏@EJoeyB: Has anyone improved their rebounding? Seems like second shots have killed us over the last few yrs.

Michigan has never been a great rebounding team under John Beilein, but last year was especially ugly on the defensive glass. The Wolverines went from average or below average in the Big Ten (7th through 9th range) to terrible (13th) last season. I’m not nearly as concerned with offensive rebounding, because much of that is based on scheme, but the Wolverines need to do a significantly better job on the defensive glass this season.

The good news is that the two best rebounders on Michigan’s roster are arguably Derrick Walton and Caris LeVert. Adding both guards back into the mix should give Michigan a boost in that department. We’ve criticized Ricky Doyle’s defensive rebounding in the past, but none of the other big men that he’s battling for minutes are proven rebounders either.

@blackboykeif: What are the odds Duncan start at the 4? #GoBlue

If Zak Irvin misses any games, I suppose he could be a candidate, but assuming a healthy rotation I’ll go with Aubrey Dawkins and Zak Irvin on the wings. Duncan Robinson seems like an ideal candidate to come off of the bench because he’s positionally versatile given his height and he’s a lights out shooter. There’s nothing better to spark a run than bringing a three-point shooter into the game to knock down a couple of triples.

@mgoblurg: Does this seem like a Final Four team? experienced, deep, and so many scoring threats. D a concern, but w/ our length could see more zone.

This roster definitely has experience, but when you look at the Final Four the common denominator is generally having multiple pros. I’m not sure if this roster has that sort of high-end talent. Caris LeVert obviously qualifies, but I’m not sure if anyone else on the roster is a pro. DraftExpress ranked the top 25 draft prospects in the Big Ten and only Caris LeVert (#3) and Aubrey Dawkins (#25) made the cut.

I think this is a team that should be competitive throughout the Big Ten season and with a couple breaks maybe make a run at the top of the league. This is a team that should make the NCAA tournament, but I’d have a really hard time picking them beyond the Sweet 16 given the question marks in the post and the fact that there are just so many moving parts to figure out.

@sdono158: Are you going to look to fast break more with this years squad?

John Beilein’s offense isn’t going to transform overnight, but if you look at some of his truly elite offensive teams they were extremely efficient at creating easy baskets off of semi-transition opportunities. Caris LeVert and Derrick Walton’s ability to rebound the ball and simultaneously start the fast break — rip and run — is an elite offensive weapon.

Add in guys like Zak Irvin, Duncan Robinson and Aubrey Dawkins as shooters on the wing and the Wolverines should also be able to create some excellent transition opportunities. I’d expect this to be a focus early and often for the Wolverines.

bacon141: Who is most at risk of losing a spot in the rotation if they don’t establish themselves early on in the season?

Someone on the wings, especially because they have a prime opportunity to establish themselves before Zak Irvin returns to full strength. Aubrey Dawkins, Duncan Robinson, Kameron Chatman (and potentially DJ Wilson or Moritz Wagner) are all battling for minutes at the three and four spots. Irvin’s injury should allow an extra 35 minutes of audition time per game until Irvin returns.