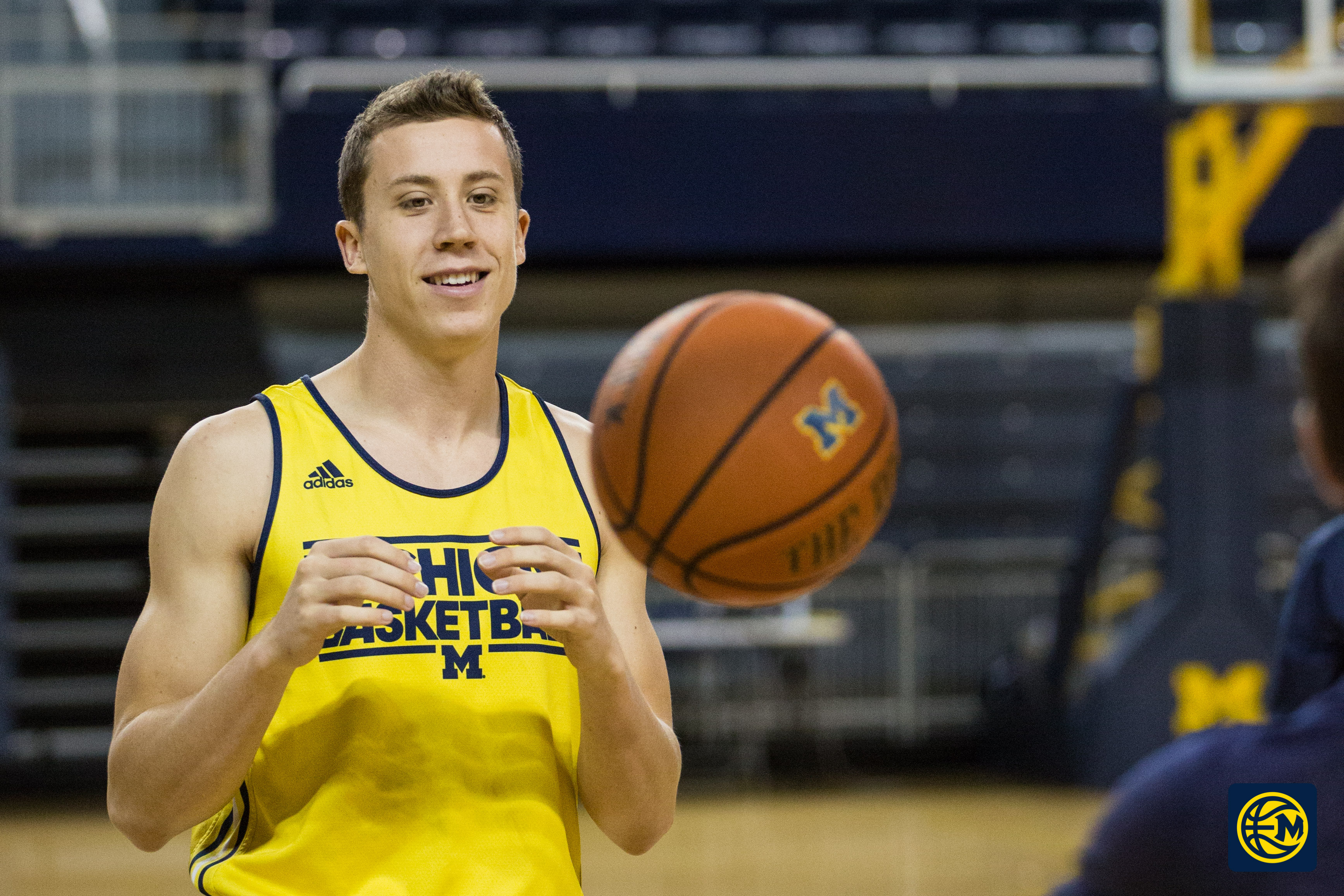 When Duncan Robinson committed to Michigan in August, 2014, Michigan fans didn’t know what to expect, but could certainly dream.

Robinson, who had been named the NCAA Division III freshman of the year, didn’t take long to look like a fish out of water at Williams College (MA). The 6-foot-8 forward averaged 17.1 points and 6.5 rebounds per game while leading the Ephs to the Division III championship game.

More pertinent to the Wolverines was Robinson’s affinity for the 3-pointer. Despite having the size for a forward, Robinson knocked down 45.3-percent of his 3-point attempts and looked capable of filling in at least somewhat for departed guard Nik Stauskas.

Beyond shooting, however, questions arise about Robinson’s ability to make the unprecedented leap from Division III to the Big Ten. But after a year on the sidelines and plenty of time in the weight room, Robinson is ready to prove himself.

The biggest difference between Williams and the Big Ten is a physical one. Then just 6-foot-7, 185 pounds, Robinson was able to pull in 6.5 rebounds per game at forward, but can expect most Big Ten forwards to be at least two inches taller, 40 pounds heavier and significantly more athletic.

When Robinson committed to Michigan, he vowed to put his year with strength and conditioning coach Jon Sanderson to use.

“I’m going to do whatever it takes to improve physically across the board,” Robinson said last August. “Strength and quickness, both of them. As far as where they see me, I think they see me as a bigger guard. A guy who can work some ball screens and make the right read with the ball in his hands as well as stretch the floor..”

The results, to say the least, are exceptional. Robinson (who was once a 5-foot-7 freshman in high school) grew over an inch on his own, but added 4.5 inches to his vertical leap, and got objectively faster and stronger since arriving in Ann Arbor. More notably, Robinson gained 26 pounds of muscle, which will allow him to have a presence in the more physical Big Ten.

He’s not going to wow with his athleticism, but the key for his development will be his ability to hold his own defensive and around the basket. Not just a shooter

With the physical gains comes an added ability for Robinson to expand his game beyond shooting from behind the arc. To see substantial playing time, Robinson will need to continue to grow as a ball-handler, passer and defensive force. Though it’s harder to measure, Michigan coach John Beilein sees one more area where Robinson can improve — aggression.

“What we’re trying to teach him, which you don’t have to teach many people is to hunt,” Beilein said. “He needs to be a hunter and he’s starting to hunt. That’s not the mentality unless on the scout team we told him that he needed to get his own he wouldn’t do it. “

Robinson, who was the center of the offense without trying at Williams, appreciates the challenge of becoming more assertive, and has embraced being a role-player in a sharing-heavy system.

“When you’re on the bench not itching to get in the game or waiting to hear your name called you see the game from a different perspective,” Robinson said. “That’s been able to help me a lot and allow me to just focus on our system and what we’re trying to accomplish from an offensive and defensive perspective, and how I fit into that plan.”

But also a shooter

Despite the development in other facets of the game, it would be foolish to think that Robinson would change his playing style away from the outside shot.

After all, Robinson made waves last December when he broke Stauskas’ 3-point shooting record in practice. In Michigan’s open practice on October 22nd, Robinson made 3-point streaks of 10-15 look as routine as a warmup stretch or jog.

“A shot that he’s slightly guarded in we feel is just as good as a shot for some of our other guys when they may be wide open,” Beilein said.

After a year on the bench and another summer of rebuilding his body, Duncan Robinson is 26 pounds heavier, seconds quicker and ready to compete in the bruising Big Ten.

Even with the improvements, Robinson’s playing time might be up in the air due to Michigan’s vast array of wing options, but his role is not. Michigan coaches can count on Robinson knocking down open shots and stretching the floor.

As long as he can knock down threes with robotic regularity, Michigan fans will keep dreaming of the possibilities.