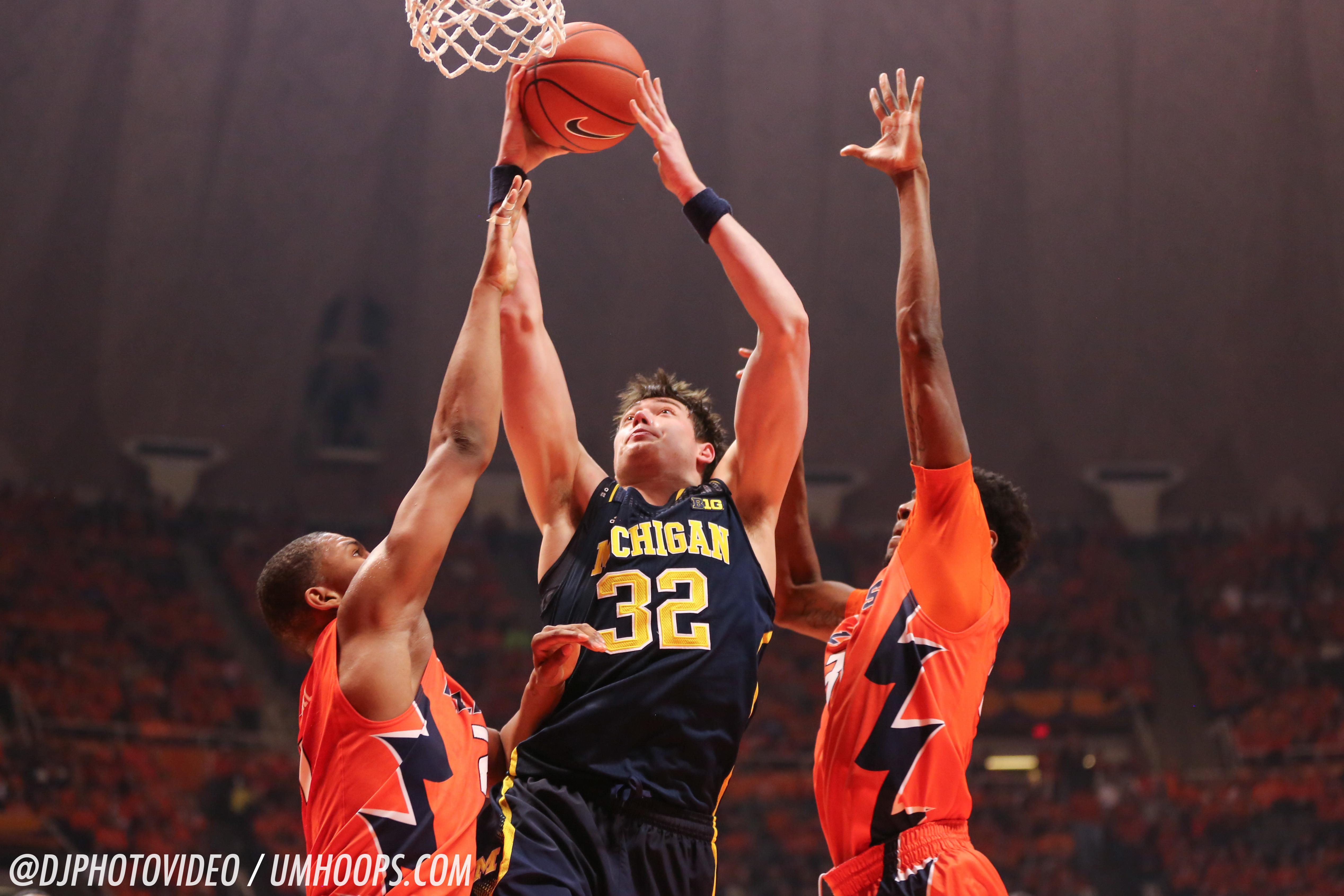 Sophomore big man Ricky Doyle enters his second season in Ann Arbor as Michigan’s most experienced big man. He started 19 games last season, but he also still has plenty to prove after an up-and-down freshman slate.

It only took Doyle ten games into his career to beat out Mark Donnal for the starting center spot last season, but near the end of the year he lost the spot to Max Bielfeldt after an illness forced him out of the lineup in March.

Doyle has all of the tools to provide what Michigan wants from the five position. He has a wide body, can finish consistently around the basket and isn’t afraid to play physically. As a freshman, it was predominantly his conditioning and quickness that held him back when he struggled.

Doyle was presumed by many to be Michigan’s likely starter at center to start his sophomore year, but preseason developments have raised a few eye-brows. Mark Donnal has received more positive press from the Wolverine coaches for his consistency and it was Donnal, not Doyle, who was practicing with the first group at Michigan’s open practice on Monday.

Double-digit performances early on in his career against Oregon and Syracuse set expectations high, but after reaching double figures three times in his first seven games, the 6-foot-9 big man only reached double digits in the scoring column five times in the final 25 games of his freshman campaign.

Doyle’s game-to-game production seemed to vary wildly over the course of the season. Here’s a look at his minutes, points and rebounds in each game last season. He showed flashes, but was never able to consistently provide the sort of production that Michigan needed from the position.

The good news is that conditioning is probably the easiest thing to improve over the course of an offseason. Doyle made significant strides from when he graduated high school through the start of his freshman season and appears to have made similar gains this offseason. Slowly but surely he’s shedding the baby fat and should be able to hold his own in the paint for longer stretches as a sophomore.

“He came in country strong. He didn’t lift a lot of weights but he was strong walking in the door,” John Beilein said at Michigan Media Day. “I think one of his bigger issues was to change the muscle mass and make it more productive. His lean muscle mass has gone way up. He’s probably in the best condition he’s been in. He’s far from a finished product but I like what I see.”

Doyle shot 61% on two-point attempts and an impressive 70% at the rim. He doesn’t have much offensive game outside of 6 or 7 feet, but he’s proven reliable around the basket. At the center position in such a pick-and-roll heavy offense, finishing becomes critical. Jordan Morgan made a career out of playing physical defense, grabbing rebounds and finishing drop-offs around the basket. “He just loves to work out,” John Beilein said at Big Ten Media Day. “He is in the gym and in the gym and in the gym. He was a young 18 year old freshman, now he’s a 19 year old sophomore. He has made great strides. Can shoot jump shots, he’s not a three-point guy but he’s comfortable with that. Comfortable with keeping his game simple in the post. I love the progress that he’s making.”

Doyle isn’t perfect in this regard. His ability to catch tough passes around the rim certainly leaves some room for improvement, but overall he’s shown the signs of being a reliable finisher inside for the Wolverines.

Michigan was the second-worst defensive rebounding team in the Big Ten last season and while it will take improvement across the board to remedy those woes, it has to start in the middle.

Competition and next steps

Doyle still seems like a guarantee to play major minutes at center, at least for now. He has more experience than Michigan’s other options and he’s naturally the most physical player of the bunch.

On the other hand, he’s facing legitimate competition for playing time this year as well. The coaches have been praising Mark Donnal, not Ricky Doyle, for his consistency in practice and it wouldn’t surprise to see Donnal earn the starting spot out of the gate based on open practices and comments from the coaches. DJ Wilson and Moritz Wagner are both extremely versatile players and have the potential to play the five as well.

If Doyle struggles, there are certainly other options available.

The larger question is what is Doyle’s ceiling and how does he reach it? Do we see him start to knock down the 15-footer? Develop a more dependable post-up game? Truly master the ball screen game and improve in not just setting picks, but rolling to the basket more effectively?

We’ve seen the flashes from Doyle before, but Michigan needs greater consistency from him in 2015-16. If he can reach it, the Wolverines will be in good hands. If not, the number of low-post options on the roster will only increase going forward.