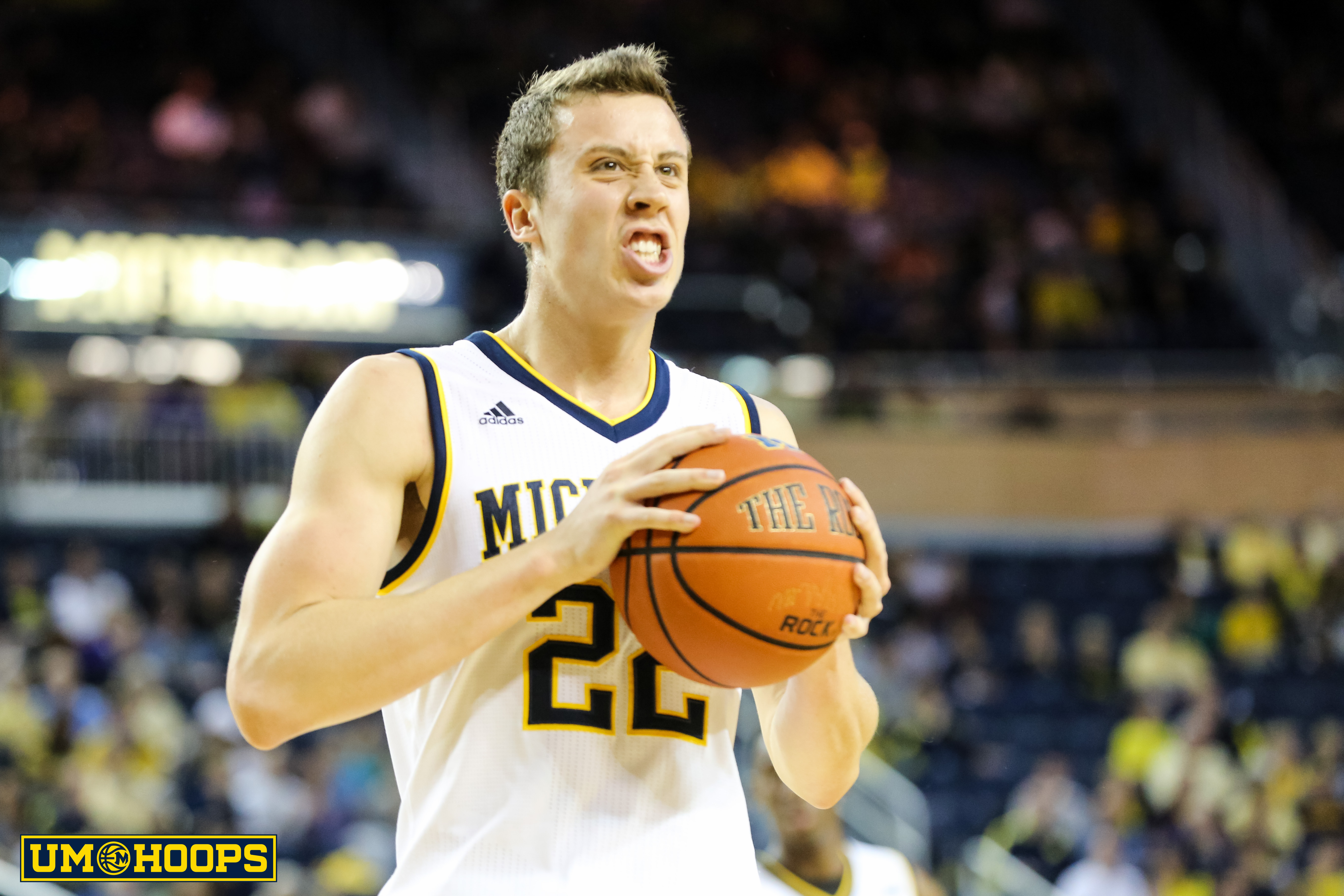 Fifteen months to the day after committing to Michigan, Robinson finally made his debut. It didn’t disappoint, as the redshirt sophomore forward notched 15 points, including three 3-pointers to help Michigan cruise past Le Moyne.

With a grin on his face, Duncan Robinson trotted to the bench to get chewed out by John Beilein. Most players don’t enjoy their coach pulling them out of the game and yelling at them, but Robinson was happy to do so.

Saturday’s film session will show that Robinson blew a defensive assignment to warrant the call, but in the moment, Robinson’s first time getting chewed out in a game as a Michigan Wolverine was just another first in a surreal day of many firsts.

Fifteen months to the day after committing to Michigan, Robinson finally made his debut. It didn’t disappoint, as the redshirt sophomore forward notched 15 points, including three 3-pointers to help Michigan cruise past Le Moyne.

“It was a lot of fun,” Robinson said of his debut. “I had to stop myself from smiling sometimes, especially when Coach B was getting on me about missing some of my assignments and stuff like that. But it was a lot of fun to be out there with those guys after working with them for an entire year.”

Coming into the game off the bench for the first time since his junior year of high school, it didn’t take Robinson long to make his mark. Previously known to Michigan fans for beating Nik Stuaskas’ 3-point shooting record in practice, Robinson drained his first outside shot on his first possession.

Before long, Robinson was second on the team in scoring behind only Caris LeVert’s 22.

“I had to stop myself from smiling sometimes, especially when Coach B was getting on me about missing some of my assignments and stuff like that.”

“I usually just try to get a couple minutes under my belt and gel before I start throwing them up,” Robinson said. “But DJ just gave me such an open look.

“I found a little bit of a rhythm I guess you could say, I kind of got a little sweat in.”

Added Beilein: “I loved the way Duncan played today. Defensively he’s still — he played all zone at Williams, so he’s still learning how to play that man defense really well, but I love what he gives this offense.”

Since committing August 6, 2014, Robinson’s sweat had been confined to practices — forced to sit out after transferring from Division III Williams College while the Wolverines struggled with depth issues. Instead of helping Michigan pick up victories, Robinson picked up 20 pounds of muscle and honed his skills.

But when Robinson arrived to the locker room Friday, there was a jersey waiting for him, and his dream was realized.

“It was surreal,” Robinson said. “For so long, I just wanted to get out there and play with my teammates. I finally got to do that (Friday).”

Robinson’s offense looked solid, but with no rebounds or assists and several miscues on defense, Robinson knows he has a ways to go before he can be a go-to player.

“We’re really deep, so whoever’s playing well on a given night can get the call,” Robinson said. “If you make a mistake there’s someone right there to come in and back you up.

“It’s a new perspective, but I’m willing to embrace any role on this team.”

As long as he has a jersey, Robinson is all smiles.