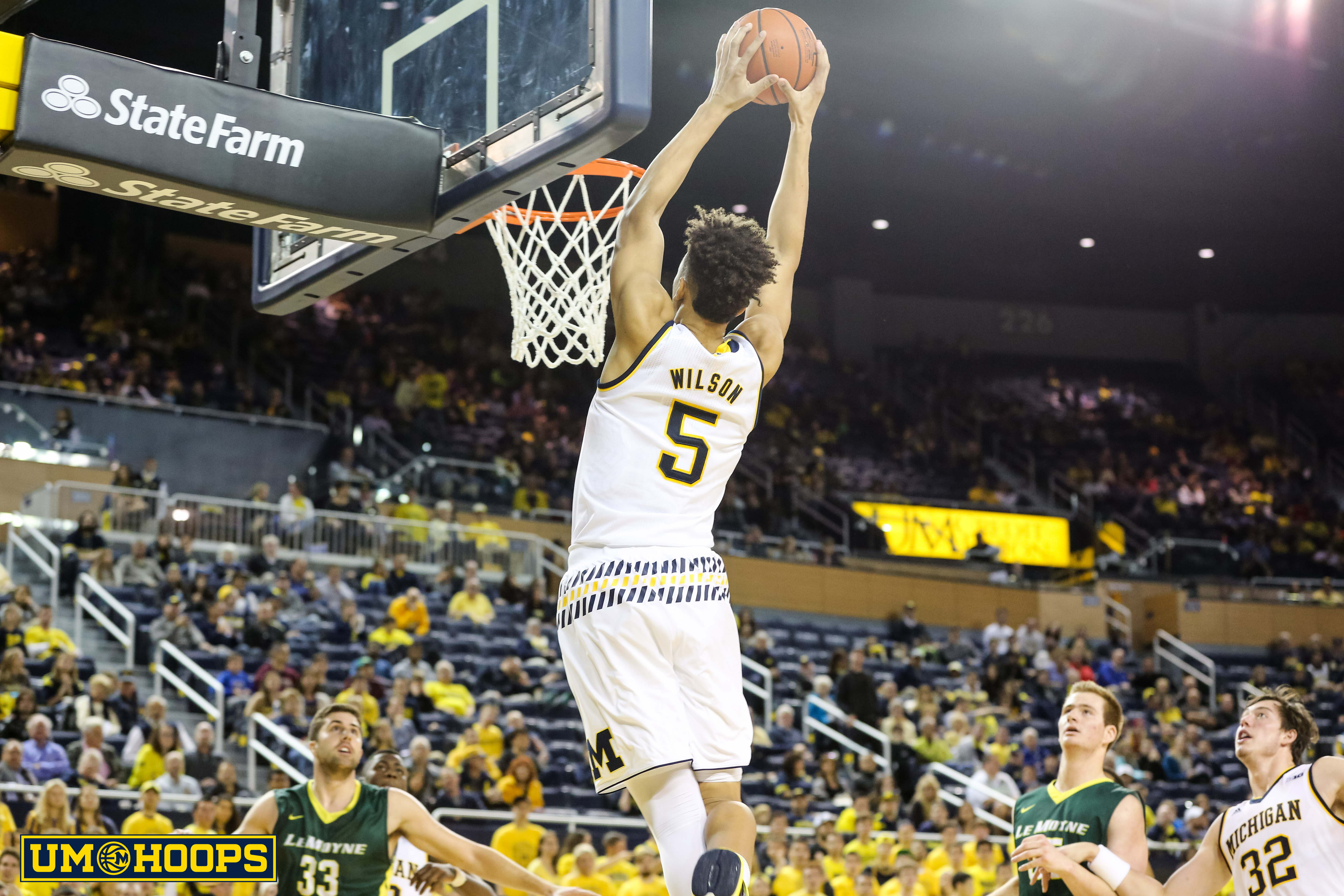 In the Michigan basketball team’s exhibition opener against Le Moyne, the primary story line was Michigan coach John Beilein coaching against his son, Patrick, who took the reins at the Division II school this summer.

The elder Beilein and his Wolverines won, 74-52, but plenty of questions marks remained. With Northern Michigan coming to town to open the regular season Friday, we look at the biggest non-Beilein lessons learned against Le Moyne.

In the Michigan basketball team’s exhibition opener against Le Moyne, the primary story line was Michigan coach John Beilein coaching against his son, Patrick, who took the reins at the Division II school this summer.

The elder Beilein and his Wolverines won, 74-52, but plenty of questions marks remained. With Northern Michigan coming to town to open the regular season Friday, we look at the biggest non-Beilein lessons learned against Le Moyne.

Michigan certainly didn’t struggle offensively on Friday — scoring 74 points on 58 shots for 1.26 points per possession despite playing 11 different players — but had moments where it struggled to keep up with the changed shot clock. To increase the tempo of play, the NCAA ruled to shorten the shot clock from 35 to 30 seconds. Somehow the Wolverines still managed to play just a 58 possession game.

Though Beilein is one of the brightest offensive minds in college basketball, the Wolverines ranked 341st out of 351 teams in adjusted tempo last season, making the adjustment to the rule change a not-so-fast process.

That was evident Friday, when Michigan seemed to rush or settle for covered threes instead of progressing through the play.

“Yeah there were a couple times where we really noticed it and thought ‘Wow, we’ve really got to get something going,’ ” Beilein said. “I think there are times in our offense that we’ll take an extra dribble, we’ll take an extra minute to set up that we can’t do. We’ve got to shorten down that dead time so that we can really get into things quicker and read it and cut better.

“We’ve got to work on getting comfortable with that 30-second clock, but I think we got rushed a couple times.”

“We might have to go back to (practicing with a 25-second clock) because there’s things that take us three seconds to do when we don’t have that,” Beilein said. “We have to pound the ball and keep moving.”

Despite the season opening in just a few days, Beilein indicated that he still has a ways to go to figure out how to best allocate playing time. LeVert, Walton, Dawkins, sophomore forward Kam Chatman and junior forward Mark Donnal got the start, but Robinson, Wilson and sophomore Ricky Doyle looked capable of taking more minutes at the forward position.

“We tried to get a lot of guys even minutes and see how they reacted,” Beilein said. “We saw some real good things and we have several young men that are … they’re close, but they’re still in the process a little bit slower and they can’t make a quick read on something. And we’ve got to drill that in and drill that in.”

With plenty of experienced players, Beilein could certainly have worse problems, but is still looking for a clear starting five to emerge.

“We had nine groups together and I try to manipulate the lineup to see what I want to see,” Beilein said. “This is a puzzle right now, but I’m not puzzled — I’m extremely interested in what we want to do. There’s a lot of pieces to this puzzle we’ve still got to figure out — we’re not close.”

Last season, Michigan’s defense took a major step back from previous seasons. A lack of size made rebounding difficult, injuries to Caris LeVert and Derrick Walton forced freshmen onto the court sooner than expected and those freshmen didn’t have time to properly learn zone defense.

With all the obstacles, the Wolverines ended the season allowing 99.7 points per 100 possessions, good for 107th in the nation and 11th in the Big Ten.

This year, Michigan returns LeVert, Walton, those inexperienced players and has added new big men D.J. Wilson and Moritz Wagner. Beilein has raised expectations for his defense, and rightfully so.

“One thing you may have noticed (Friday) is that if you get lost in a defensive assignment and you get a blow-by, take a seat,” Beilein said. “We have that luxury that we haven’t had before.”

Beilein’s quick hook could be seen in the second half, in which the Wolverines allowed 38 points compared to 14 in the first half. Redshirt sophomore forward Duncan Robinson and sophomore guard Aubrey Dawkins were taken out multiple times due to defensive miscues.

Of course, the quick hook isn’t designed to apply to LeVert and Walton. With both players expected to be among the best in the Big Ten, Beilein can’t afford to take them out. But if he has to, it’s certainly less of an issue than in the past.

“They’ve got to be defensive shut-down guys right now, I mean they’ve got to shut people down and that’s got to be the mentality,” Beilein said. “In the past couple years, we didn’t have that luxury. Last year, if one of them had a blow-by, I wouldn’t have gone to Muhammad-Ali (Abdur-Rahkman) because he wasn’t ready to do it either.

“Now guys like that are a little bit better. I will not have a quick hook on offense unless they blow up a timeout play, but defensively, we’ve got to hold them accountable.”

Donnal listed as a junior

A month ago, Mark Donnal was listed as a redshirt sophomore on Michigan’s official roster. Now the 6-foot-9 big man is listed without his redshirt as a junior (h/t fox14) while other redshirts Duncan Robinson and DJ Wilson continued to be listed in their redshirt class.

Donnal still has three seasons of eligibility remaining after sitting out his freshman year, but this isn’t the first time that Michigan has reclassified a formerly redshirted player. Max Bielfeldt was reclassified from a redshirt junior to a senior before last season which provided him the opportunity to transfer for his final eligibility at Indiana.