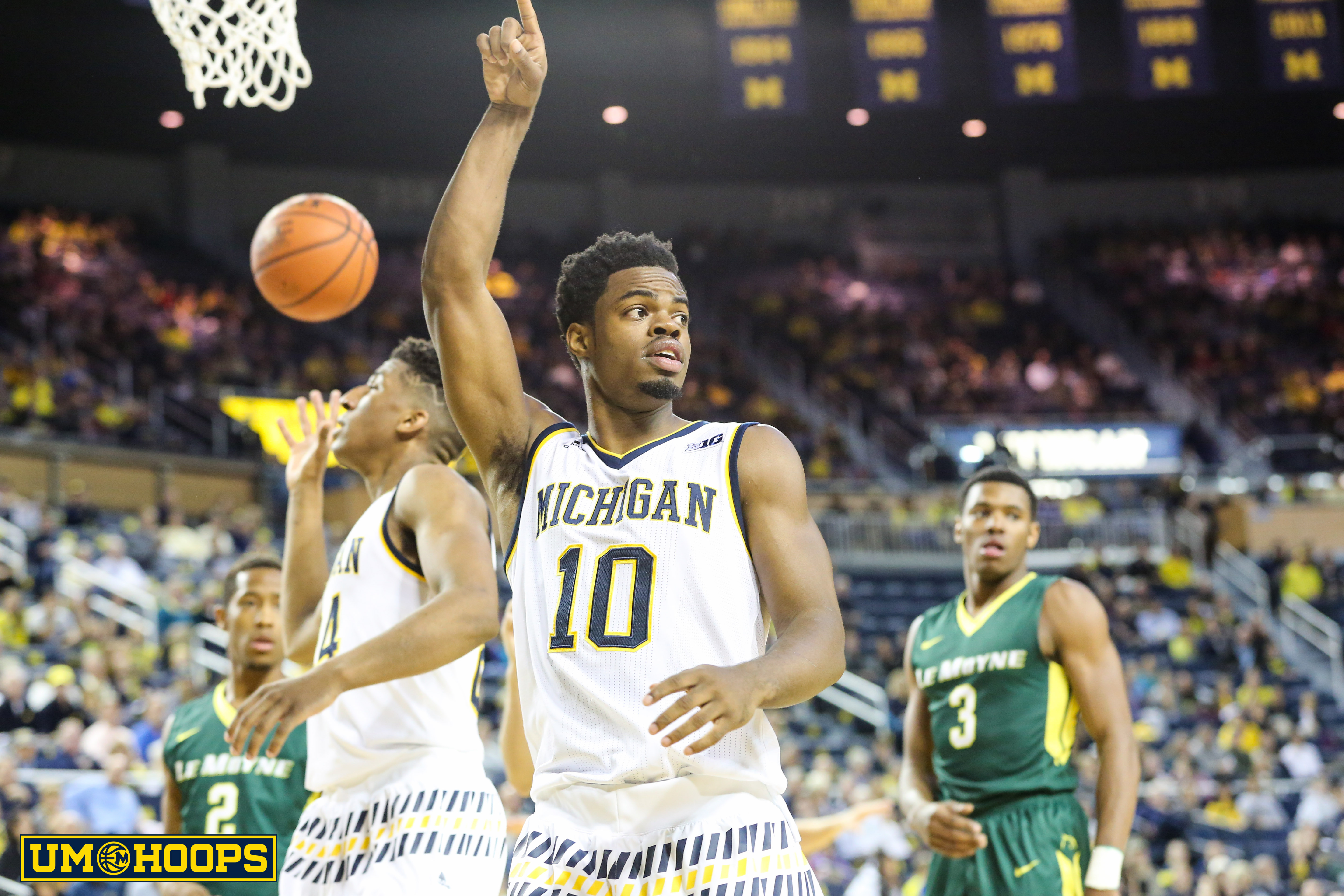 With an exhibition game in the books and live basketball just days away, we opened up the mailbag to discuss Zak Irvin, Michigan’s offensive and defensive ceilings, recruiting philosophy and much more.

The UM Hoops Mailbag is a collection of questions tweeted (@umhoops), e-mailed, sent via our Facebook page, or posted on our new message boards. Submit your questions and we’ll answer as many as we can.

@kennybill32: What does Irvin need to improve on in order to be considered an NBA draft pick?

The skills that Irvin showed at the end of last season were a great start. He rebounded, passed and created at a higher level than we’ve seen throughout his career, dating back to high school and AAU. That version of Zak Irvin that we saw last March was a new player and we can only hope that he picks up where he left off.

Irvin isn’t a great athlete which inhibits some of his NBA aspirations. The way to make up for those athletic liabilities is to become more of a playmaker. Nik Stauskas pretty much laid the blueprint for how to get to the NBA without great quickness from the guard position. Prove that you can make the right shots and passes and create offense.

It’s disappointing that Irvin was sidelined for the last two months or so given that he could have been on a verge of a big jump this year. I still think he has the ability to take a leap, but he might start slowly this season as he works back up to speed.

hailtoyourvictor: Would you take the Over or Under on 1.5 Michigan players being selected in the 2016 NBA draft?

I’d go under. LeVert is the obvious pick, but I’d be very surprised if someone else hears their name on stage next June.

@eboekeloo: Should we be worried about the lack of a Beilein coaching tree? Our assistants have not landed a head coaching job as I expected.

I’m not particularly worried. On a simplistic level, it’s more beneficial to keep good assistants on the staff than have them go on to head coaching gigs. I’d love to see LaVall Jordan land a head coaching gig, but it was better for Michigan than it was for Butler than the Bulldogs hired Brandon Miller over Jordan.

Looking ahead to the future, it’s tough to predict the future for the assistant coaches on the staff. There’s going to be a time in the next six years — Beilein’s contract extension now goes through 2021 — where there could start to be discussion about a new coach. Would Michigan stay in-house and hire a long-time Beilein assistant or perform a national coaching search? In an ideal world, it might be good to see Jordan or Bacari Alexander land a head coaching gig in the next few years to prove themselves before angling for the Michigan job.

Either way, Michigan is lucky to have Jeff Meyer, Jordan and Alexander on staff because they are an excellent coaching staff.

I found it interesting that Aubrey/Duncan played only the three and Kam/DJ played only the 4. When Zak comes back, does he slide to the 4? If he plays the 3, does Duncan become buried on the depth chart?

I think this is more symbolic of how the minutes break down with just four in the mix compared to with Irvin in the mix. Irvin is arguably the most versatile player of the five players that have the potential to play the wing. He’s played the three, four and two at different times during his career. He’s better suited to guard opposing fours that Dawkins or Robinson and is more skilled and a better shooter than Wilson and Chatman.

Because of the fact that he’s so versatile, I’m not sure that one position or the other will be phased out of the rotation. Michigan has the luxury of pairing the best players of the bunch with Irvin and working out the rest on the fly.

How would you describe Coach Beilein’s recruiting criteria? What are his most sought attributes in a recruit? What is his vision for the program as a whole as it relates to recruiting?

On the court, shooting is probably near the top of the list given that Michigan’s offense is so three-point heavy. From there the other top priorities are probably ball-handling, passing and length.

Beilein wants versatile players who can fit within his system, but his criteria goes far beyond just that. You’ll hear him say constantly that he wants to recruit good teammates.

“I’ve come to the realization that if you get good players and good teammates that have a great passion for the game, you can really achieve a lot more success than we’ve ever had,” the head coach said in 2013.

And as for one-and-dones, Beilein has stuck to a pretty firm line. He wants kids to pursue their dreams of playing in the NBA, but he wants them to unpack their suitcase in Ann Arbor and focus on winning games first.

ReegsShannon: What is a reasonable floor/ceiling/median for the quality of this year’s defense? Same question for the offense as well.

I think the offense has a ceiling in the top 10-15 in the country. We’ve seen in the past that John Beilein offenses are capable of being very special given the right combination of playmaking and shooting. Even after a disappointing season last year, KenPom projects Michigan at No. 9 overall. I’d set the expectation around 10-15 with the floor probably in the mid 20s to 30s assuming a rash of injuries doesn’t hit this year’s team as well.

RBWolverine: The team struggled mightily to get into an offensive rhythm early last year but improved over the course of the year despite losing Levert and Walton to injury. Do you expect some early struggles on offense again this year? What do you think would be the most important changes to allow this team to avoid similar performances and have a more efficient (closer to vintage Beilein) offense right from the get-go?

I think we’ve already seen a bit of those struggles this season in the exhibition, but for a different reason. Last year Michigan struggled early on because it barely had five players that were equipped and confident to run the offense. The result was Caris LeVert forcing a lot of bad offense because Michigan didn’t have anywhere else to look.

This year, Michigan might have too many players that can run the offense effectively. The Wolverines return over 90% of their scoring and add Duncan Robinson and DJ Wilson, but need to figure out roles for everyone — most of which will be completely different than the roles they became accustomed to last season. I expect this to be a far better offensive team than last season (not that that’s saying much), but wouldn’t be surprised if there’s still a little rust to clean up early on, especially with the injury recovery to Spike Albrecht and Zak Irvin.