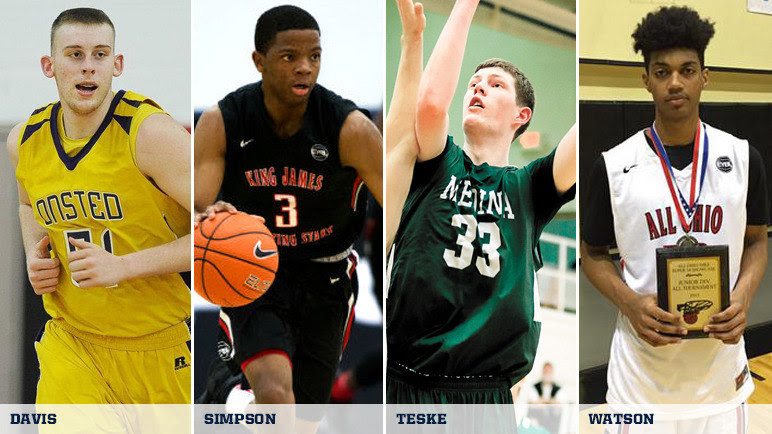 Michigan announced the signing of Austin Davis, Xavier Simpson, Jon Teske and Ibi Watson this afternoon. The Wolverines inked the four class of 2016 prospects to letters of intent on November 11th, the first day of the early signing period. Find Beilein’s first quotes on his new prospects after the jump.

Michigan announced the signing of Austin Davis, Xavier Simpson, Jon Teske and Ibi Watson this afternoon. The Wolverines inked the four class of 2016 prospects to letters of intent on November 11th, the first day of the early signing period.

Read the full Athletic Department press release with quotes from head coach John Beilein on the new signees below.

“All four of these young men are a great fit for Michigan Basketball both academically and athletically,” said Beilein. “They are hardworking and high achieving kids who come from good families and really love the game. We are excited to see the potential of this class and know they have the capabilities to help us compete and win future Big Ten championships.”

A native of Lima, Ohio, Simpson spent two season playing at Lima Catholic Central before transferring to Lima Senior High School after his father, Quincey, was named head coach. In his first season with the Spartans, he led them to a 22-5 record and a Three Rivers Conference runner-up league finish. He averaged 19.8 points, 8.0 assists and 3.0 steals per game and helped LSHS to the regional semifinal in the Division I playoffs. For his efforts, he was named the Associated Press Division I Player of the Year as well as an All-Ohio first team member.

Before his transfer, Simpson helped Lima Catholic Central to the Ohio Division III state title as a sophomore. Averaging 19.0 points, 6.0 assist and 3.0 steals, he helped Thunderbirds to a 25-4 record. In the title game, he scored 16 of his 18 points over the final 16 minutes to guide LCC to the state crown with a 64-62 win over Villa Angela-St. Joseph.

“Xavier is a tough, competitive point guard who makes the players around him better”

“Xavier is a tough, competitive point guard who makes the players around him better,” said Beilein of Simpson. “Being the son of a coach, he has a tremendous basketball IQ and will do whatever it takes to win, whether that is scoring, diving for the loose ball or just finding the open man. He is an elite defender and balances that with his command of the game and leading his team on the floor.”

After transferring to Pickerington Central for his junior season, Watson finished his first season with the Tigers averaging 19.0 points, 6.0 rebounds and 4.0 assists. Before heading to Central, Watson played two varsity seasons at Athens High School under Jeff Skinner, guiding the Bulldogs to back-to-back Tri-Valley I Conference titles.

He averaged 19.8 points as a sophomore and 16.0 points as a freshman, posting 40 double-figure scoring games in 48 games. As a freshman, he helped the Bulldogs to a 2013 District championship and advance to the Division II regional semifinal.

“We love the high ceiling for Ibi,” said Beilein said of Watson. “He has a tremendous passion for the game and with his work ethic we have seen improvement year to year. He has the desire to become a great player. He can really shoot and pass the ball. We also love his athleticism and feel for the game. He comes from a winning program and we know he will be prepared for the challenges ahead.”

“We love the high ceiling for Ibi. He can really shoot and pass the ball.”

He finished the 2015 postseason posting 15.2 points, 7.6 rebounds and 7.2 blocks per game, helping him to the Medina-Post’s Player of the Year and the Medina-Gazette’sMost Valuable Player awards.

“The first thing you notice is Jon’s size; however, he is very agile and skilled for a big man,” said Beilein of Teske. “He can really run the floor and is a defensive presence in the middle. Jon is a true rim protector with his shot blocking ability. He is an excellent shooter as well as a passer. As he gains upper body strength and develops physically, his game will continue to mature, and he will be able to compete and be successful as a Big Ten center.”

The first thing you notice is Jon’s size; however, he is very agile and skilled for a big man

A local Onsted, Michigan, native, Davis was honored as the 2015 Associated Press Class B Player of the Year as well as all-state first team honors after averaging 26.2 points, 17.3 rebounds and 4.8 blocks per game. Last season, he led Onsted High School to a 19-5 record, a runner-up finish in the Lenawee County Conference (11-3) and trip to the Class B Regional 10 championship game.

Coached by Brad Maska, Davis is a two-time Class B All-State first team selection by the Detroit News and Detroit Free Press as well as a two-time Lenawee County Player of the Year. As a junior, he guided Onsted to its first District championship in 32 years (1983). Since the eighth grade, he has grown seven inches and currently has a 7-2 wing span.

“Austin is a strong low post player who has great presence in the middle,” said Beilein of Davis. “He finishes well around the rim, rebounds well and has excellent passing skills. He has exceptional length and has really put in the work to improve his strength and physical conditioning. We love his great attitude, passion for the game and that he loves the University of Michigan. Austin is young for his grade, as he just turned 17 this past July, so his best days are ahead of him.”

Michigan will lose two seniors from this season’s roster due to graduation — guards Spike Albrecht and Caris LeVert.