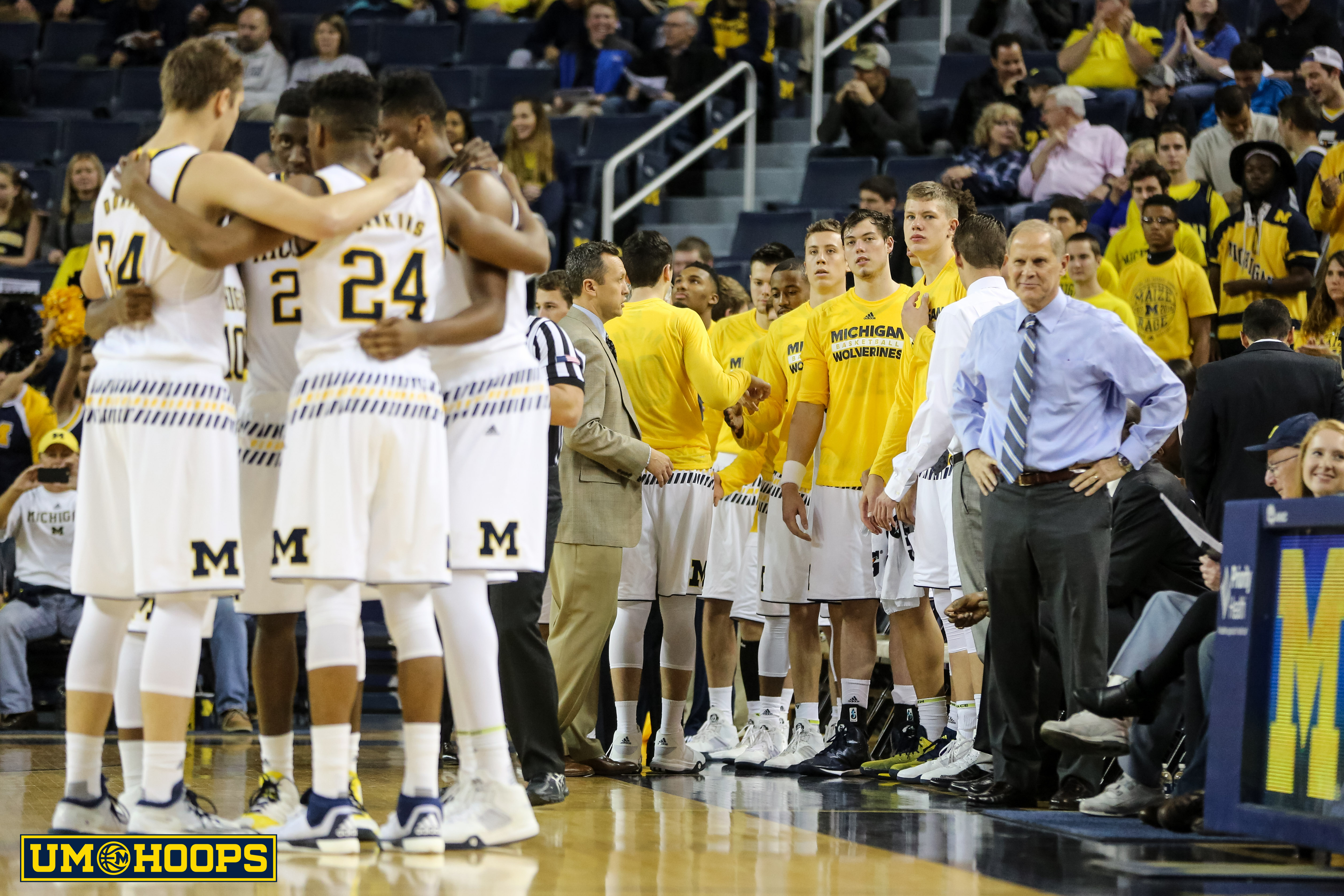 Michigan won’t put last season behind it with a win over Northern Michigan, but there might not be another team in the country more excited to have a clean slate.

Michigan won’t put last season behind it with a win over Northern Michigan, but there might not be another team in the country more excited to have a clean slate.

In many ways this will just be another tune up for a Wolverine team still trying to figure out how the pieces fit together. There was obvious room for improvement in last week’s exhibition win over Le Moyne and a Gavitt Games showdown with Xavier is only a week away.

Northern Michigan has played a pair of exhibitions against Finlandia (a 90-82 win) and Michigan State (a 94-53 loss). The Wildcats stayed close to Michigan State through 20 minutes, trailing 38-33 at the half, but were outscored 56-20 in the second half resulting in the blow out loss.

Northern finished last season with a 9-19 record and return their leading scorer from last season, Jordan Perez. Perez averaged 11.6 points per game and shot 42% from three-point range last season. He scored 15 points on 18 shots against the Spartans earlier this month.

We won’t dive much deeper into Northern Michigan in this preview, but here are a few things we’ll be watching for tonight.

Mark Donnal and Kameron Chatman were something of surprise starters in the exhibition game. Neither player played particularly great in the opener, but the players behind them didn’t either.

“I have a slightly better idea (of the rotation),” Beilein said on Thursday. “But it is still… It’s difficult to try to figure it out because one day someone looks like a million bucks and the other guy doesn’t and then they switch spots the next day. Sometimes too many makes it more difficult.”

Will he have the same lineup on Friday? Beilein admitted that he wasn’t sure and that his lineup could change because Northern Michigan is likely to run four guards at the Wolverines.

“It’s possible, it also may not happen. I’m actually going to make my judgement after (Thursday).”

Clock is ticking for wing minutes

Zak Irvin isn’t going to play on Friday night, but he’s practicing and is getting closer to a return. That means the clock is ticking on the extra available wing minutes. Duncan Robinson outplayed Michigan’s other wings last week by a fairly wide margin, but DJ Wilson, Kameron Chatman and Aubrey Dawkins will have another opportunity to make a statement tonight.

The two I’ll be paying most attention to are Kameron Chatman and DJ Wilson. I’d like to see Chatman involved offensive with some flashes to the opposite block and see if he can hit a few jumpers to complement his passing ability.

Wilson shot the ball poorly from the perimeter in the opener, but showed some ability to finish. Will he continue to grow more comfortable on the perimeter or is his as a stretch five — somewhere he didn’t play at all in the opener.

Mark Donnal and Ricky Doyle both had fairly uninspiring performances in the season opener. Neither player rebounded particularly well or showed anything overly impressive offensively. And that was against a team that barely had anyone taller than 6-foot-6.

The two biggest things that Michigan needs out of the spot are rebounding and the ability to finish off of the pick and roll. That’s where we’ll be watching closely tonight and over the first few games.

“They were probably best at understanding the concepts that we were trying to run on offense,” Beilein said of Ricky Doyle and Kameron Chatman starting. “Offensively and defensively both of them understood things a little more.”

Donnal may understand the concepts and be more consistent in practice, but Doyle has proven he can be more productive — at times — in a real game setting.

This was something I wrote to watch for in last year’s season opening preview. We saw a bit of aggressiveness from Walton late in the Le Moyne game, but he has another gear. It’s great to have a point guard content to facilitate, but there are going to be times this year that Michigan needs Walton to be a more aggressive, ball screen, scoring guard.

I think he started to show signs of it early on last season, and this is a great opportunity to pick up where he left off.

“I think he was really making elevations as we went into that Thanksgiving tournament last year against Oregon and Villanova and then everything was changed through the injury and then through the next injury to the toe and then foot,” Beilein said. “He’s still just getting back and really seeing the court at full speed again and he’s s a big part of what we’re trying to do.”

Walton took only five shots (and 5 FTA) in Michigan’s exhibition and handed out a pair of assists, I would be more than content with him doubling both those numbers tonight.

This is probably the biggest question entering this game. What will Michigan do with Moritz Wagner?

John Beilein admitted that he has played well enough that there’s a chance that Michigan will just throw Wagner in the game and see what happens.

“No we haven’t,” Beilein responded when asked if the Wolverines had decided whether to redshirt Moritz Wagner. “I do know if we put him in the game… and that could happen. Moe has that talent and he shows that he’s getting better every day in practice and it’s very attractive to put him in there. We may just put him in there tomorrow. He’s had three or four really good practices in a row. If he keeps grading out the way he’s been in practice he will not redshirt.”

The benefit to redshirting Wagner, Beilein said, wouldn’t so much be the potential fifth year, but the chance to spend an intense season in the weight room.

“The fact is he’s really improving every day. One of the advantages of a redshirt is not the fifth year, it’s the intense weight lifting we can do with him.”

This game will be streamed online by BTN Plus, a premium streaming service from the Big Ten Network.

If you don’t want to purchase a subscription to BTN Plus, the game will be re-aired on the Big Ten Network at 11:30 p.m. on Sunday evening.

(Note: The last game was apparently streamed for free without authenticating subscriptions, so trying to site around game time is probably worth a shot)