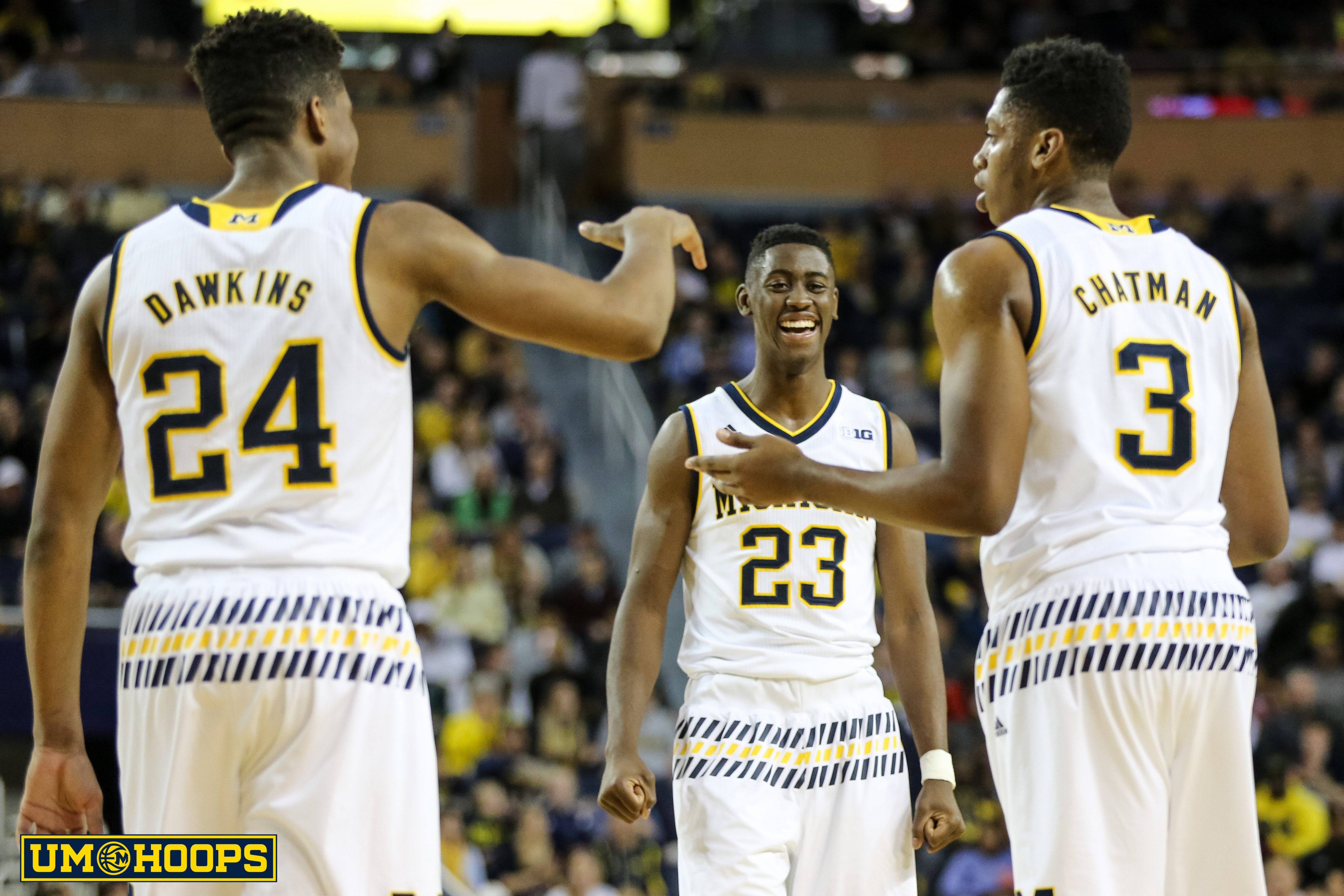 Michigan knocked off Northern Michigan in its season opener on Friday night thanks to impressive performances from Caris LeVert and Aubrey Dawkins, who combined for 33 of Michigan’s 70 points on the evening.

Michigan knocked off Northern Michigan in its season opener on Friday night thanks to impressive performances from Caris LeVert and Aubrey Dawkins, who combined for 33 of the Wolverines’ 70 points on the evening.

Northern Michigan hung close in the first half, trailing by just ten points at the break, but the Wolverines pulled away in the second — opening the period on a 12-2 run — for an easy 70-44 victory.

John Beilein stuck with the same starting lineup as the exhibition game, opting for Kameron Chatman and Mark Donnal at the four and five spots, and both players continued their solid if not always spectacular play. Redshirt freshman DJ Wilson ended up playing more minutes than either starter at the four or five, tallying 23 minutes combined at the four and five positions.

Michigan’s offense was good, but not great despite some hot shooting. The Wolverines managed a 58 effective field goal percentage thanks in large part to their ability to get to the basket — a welcome sign after last season’s team seemed to settle for threes more often than not. Michigan shot 15 of 22 near the rim and only 31% of its field goal attempts were from long distance. Here’s a look at Michigan’s shooting splits on the night.

The Wolverines got a lot of production out of their two biggest scorers — Caris LeVert and Aubrey Dawkins — but ten different Wolverines found the score sheet on the night. The offense was powered by fast break scoring (14-2) and points off of turnovers (23-11).

The Wolverines held Northern to just .71 points per possession on the night and forced as many turnovers as they did in any game last year. Part of that was the fact that Michigan’s newfound length is starting to pay off (nine live ball steals) and the other part is that the refs took the new emphasis on moving screens to heart and called at least four or five on the Wildcats. Either way, this was a strong defensive performance overall against a team that didn’t have a lot of firepower.

But the major red flag in Michigan’s defensive performance was on the glass. John Beilein spoke about finishing possessions in his post game and there were several times when the Wolverines were beat to 50-50 balls or rebounds under the rim. The Wildcats rebounded 31% of their misses on the night and outscored the Wolverines in the second chance point departments. Against an undersized Division II team, Michigan needs their big men to do a better job on the glass.

The four players who saw time at the five position — DJ Wilson, Mark Donnal, Ricky Doyle and Moritz Wagner — had one defensive rebound each in a combined 55 minutes of playing time. That’s not good enough and will be exposed against bigger and more talented opponents. All four players need to play more physically on the interior and attack the ball when it’s in the air off the rim.

Michigan doesn’t have long to sit around before its next game. The Wolverines will regroup and face an Elon team that looks like it will knock off Charlotte on the road tonight in its season opener.