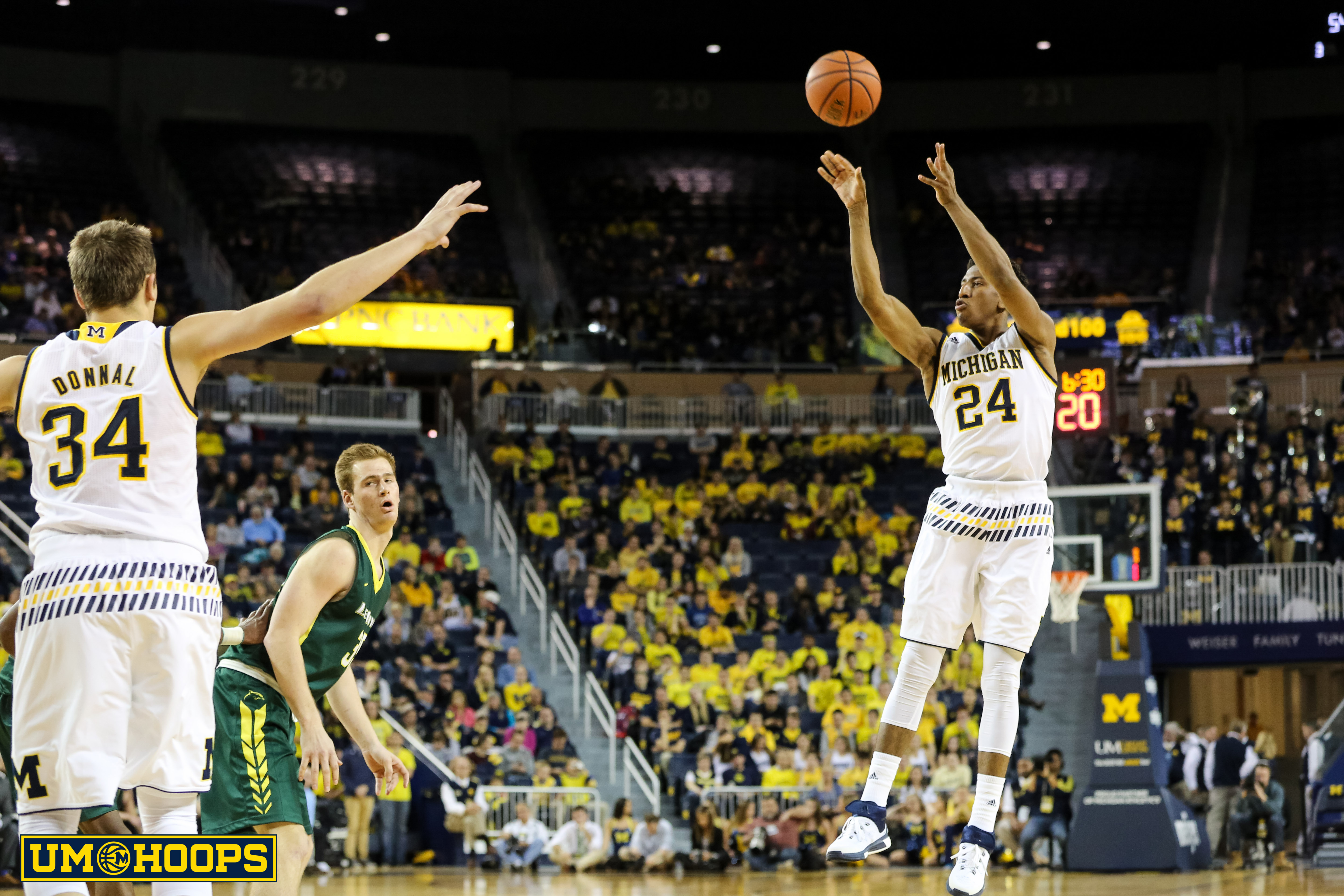 Michigan hosts Northern Michigan tonight in its season opener, but is still trying to figure out its rotation, injury and redshirt situation.

Michigan fans know better than anyone the importance of not taking teams lightly.

After the Wolverines have dropped losses to Charlotte, Eastern Michigan and New Jersey Institute of Technology in the past two seasons, even games against Division II Northern Michigan aren’t taken lightly in the Crisler Center halls.

“It is an interesting matchup for us because they play four guards and just attack,” said Michigan coach John Beilein. “With the new foul rule, that can be a difficult thing for everyone to defend. They’re going to call any type of hand-checking in a foul-shooting contest, and I don’t like getting in a foul-shooting contest with those teams, anything can happen there.

“People are going to look at this game and think it’s a Division II guarantee game, but it’s going to be a challenge for us from what I’ve seen from all scouting reports and videos.”

Of course, this season’s team is older and more experienced, and feels capable of avoiding past nightmares.

“I think we’re a lot wiser this year,” said senior guard Caris LeVert. “Last year we didn’t know what we were getting ourselves into — especially the younger guys. We didn’t really know how to win basketball games.

The Wildcats — who went 9-19 in Division II last season — are heavy underdogs, but until the final buzzer sounds, Michigan won’t be taking them lightly.

It’s well documented that Michigan’s injury woes are still lingering into this season. LeVert and junior guard Derrick Walton Jr. are back in full, but the other two members of the core four — senior guard Spike Albrecht and junior forward Zak Irvin — have yet to reach full strength.

Irvin will miss Friday’s game, while Albrecht will be playing in what Beilein called “spot minutes.”

“Still a bit more complex than I’d like it to be this time of year,” Beilein said. “Don’t expect Zak Irvin to play this weekend at all. He is still getting in shape, he’s healthy, but he’s not in game shape right now, so we think we can do more with him off the court than pushing him in there right now.

“Spike is still trying like crazy, he’s still not the Spike you’ve seen in recent years but he’ll be in there doing his best.”

With Irvin and Albrecht not at full speed, that opens up spots for others to play. Without a number of evenly-matched players, however, that’s a tougher task than what Beilein is used to having.

Beilein said Thursday that the level of ambiguity in his rotations is comparable to his first year coaching a new team.

Fortunately, the coach has been with the players he has for years, and knows which players need to step up. Beilein said he expects redshirt sophomore Duncan Robinson to continue producing in Irvin’s absence, and said he wanted to see more out of his big men with larger teams looming.

“We’re not ready to roll, but we’re as ready as we’re going to be to roll,” Beilein said.

Fans should expect to see many different rotation and lineup sets over the coming weeks, but with all but freshman Moritz Wagner returning from last season, LeVert says it doesn’t matter who’s on the court.

“At this point we’re all pretty comfortable playing with each other,” LeVert said. “Whoever’s out there, we just need to do whatever it takes to win basketball games.”

Wagner not out for redshirt, Donnal situation cleared up

Beilein isn’t sure who he’s going to start Friday or moving forward, but clarified Donnal’s reclassification from redshirt sophomore to junior was not based on Donnal’s recent play.

“As you know things have changed a lot over the years, and all of our kids are on four-year scholarships,” Beilein said. “(Donnal)’s in the third year of a four-year scholarship. If a fifth year is possible in probably two years we’ll make a determination. … We’ll treat the situation individually and with what’s best for the program.

“We’re not going to do it on senior day. We’re two years out, we’ll say you’re a junior on the roster and you should plan on graduating in 2017.”

The most unlikely candidate to start at forward is Wagner, who still has the possibility to redshirt. Beilein hasn’t ruled either way, but knows he likes what he sees from the freshman.

“Moe’s got that talent and shows that he’s getting better every day in practice,” Beilein said. “It’s very attractive to put him in there. We may just put him in there tomorrow. He’s had three or four really good practices in a row where if he keeps grading out the way he has been, he will not redshirt.

Beilein noted that a redshirt would allow Wagner to see physical development similar to what Wilson and Robinson saw last season, along with a year to develop to the American game and lifestyle. The coach sees benefits to both, but no clear answer yet.

“We have so many balls juggling in the air right now with this team,” Beilein said. “I feel like we’re pretty good at this, but we don’t have the answers yet.”