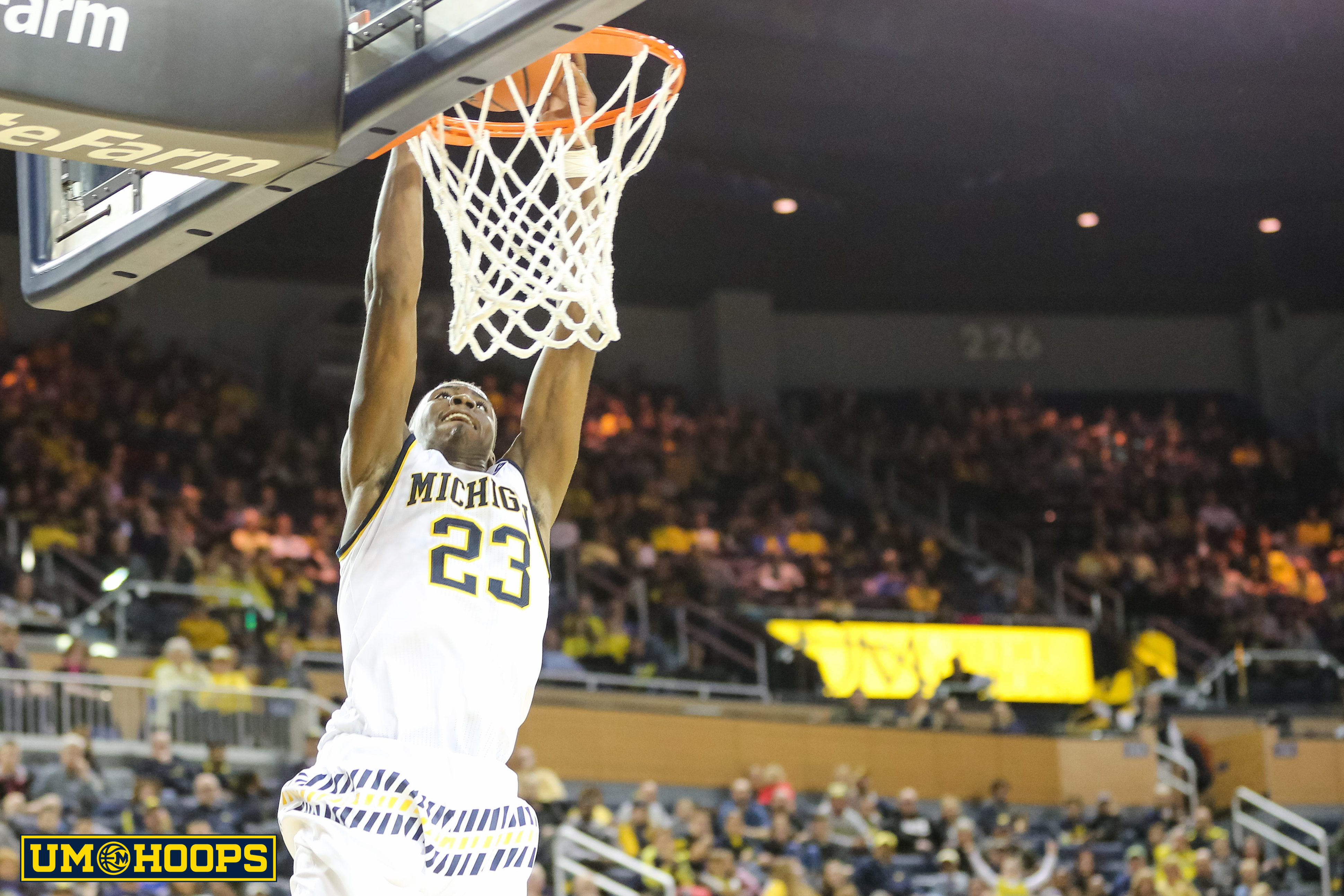 In its 70-44, season-opening over Northern Michigan, there were plenty of positives for the No. 25 Michigan basketball team. The Wolverines shot 52 percent from the field, forced 19 turnovers and saw contributions from 11 different players. But the one that had Beilein the happiest is the most familiar face on Michigan’s team. After missing the second half of last season, senior guard Caris LeVert was back to pacing the Wolverines’ offense again Friday.

In its 70-44, season-opening over Northern Michigan, there were plenty of positives for the No. 25 Michigan basketball team. The Wolverines shot 52 percent from the field, forced 19 turnovers and saw contributions from 11 different players.

But the one that had Beilein the happiest is the most familiar face on Michigan’s team. After missing the second half of last season, senior guard Caris LeVert was back to pacing the Wolverines’ offense again Friday.

The senior scored 22 points in last week’s exhibition against Le Moyne, and chipped in 18 points, four rebounds and five assists in 29 minutes against the Wildcats.

Beyond the numbers, LeVert showed an ability to make plays for himself, leading the team in transition and broken plays. The ability to create his own offense was a welcome sight to Beilein.

“You just don’t have to have this play card that is trying to dial things up all the time,” Beilein said. “He’s just going to make plays in space and in transition, which he was really good at today. Or he’ll just opt out of the offensive set because they’re playing him a certain way.

“I wouldn’t say I’m less relaxed, but you’re not racking your brain trying to find ways to score. He helps you a lot in that area.”

Not to be outdone, sophomore guard Aubrey Dawkins — one of the players who had to fill in during LeVert’s absence last season — picked up right where he left off in the spring, tallying 15 points on just seven shots, two assists and a game-high six rebounds.

“We just talked about how efficient it was,” Beilein said. “He didn’t have to force anything, he’s making more plays. … He also had six rebounds, that’s something he wasn’t doing last year, we’re encouraging him to — unless the guard is underneath or the shot comes from the corner by a guard — be by the backboard.”

Beilein said throughout much of the preseason that Dawkins was the team’s most-improved player during the offseason. He didn’t show it last week while battling a sore ankle, going just 1-for-7 from the field, but showed no hesitation Friday. More impressive, he looked better in most areas.

Beilein noted that Dawkins continues to progress at a high rate, even fixing mistakes that he was making in practice the night before.

“That’s the application we stress with all of our guys,” Beilein said. “How we’re going to apply what we’re learning every day and how soon we can do it in the game. So that was good.”

With so many returning players, much of the preseason question marks centered on freshman forward Moritz Wagner’s undefined role on the team this season.

Moving from Germany in June but boasting a 6-foot-10.5 frame, it was unclear whether or not Wagner would play.

“If he keeps practicing and progressing at the rate that he is, he’ll play,” Beilein said before the game. “But we don’t know. There are benefits to both.”

Beilein cited on Thursday that by redshirting Wagner, he could put the freshman under an intense weight-training program, but would also take a talented, large and energetic player out of his rotation. But it didn’t take long for Beilein to make up his mind. With the game well in hand toward the end of the second half, the coach asked his lone scholarship freshman if he was sure he wanted to play.

When Wagner said he was, the redshirt was thrown out on the spot.

“It was (spur of the moment),” Beilein said. “We had talked with him quite a bit about this. … I just really wanted to see him in a game, and I love what we saw. He was active, he’s got a motor.”

Added redshirt freshman D.J. Wilson: “I remember Coach asking (Wagner) on the bench if he was ready, and he said ‘I’m ready.’ I’m happy for Moe, and think he’s ready.”

Drawing large cheers as he checked into the game, Wagner made his debut. He tallied two points and two rebound in six minutes, but looked right at home in his first legitimate competition in America.

“He’s got some things he’s got to work on — he doesn’t have the strength to do what we want him to do in the Big Ten yet,” Beilein said. “But that’s what we can work on in the in-between sessions the best we can without inhibiting his ability to play the next game.”

Beilein looking for physicality from his forwards

Though Michigan had plenty of positives in the easy win, Beilein noted that Northern Michigan is a team the Wolverines should beat, and that the lack of physicality — especially from his big men — is a problem that won’t fly for long.

“Someone needs to get the rebound, we’ve got to finish possessions every time,” Beilein said. “That is backbreaking when you don’t finish and now you’ve got to guard (30) more (seconds).“

Despite the Wildcats running a four-guard set most of the game and not starting a player taller than 6-foot-7, Michigan reeled in only 69 percent of its defensive rebounds.

Beilein reiterated that it wasn’t an issue of talent, just of physicality and effort.

“As always, when you get these skinny guys and you develop your bodies, they don’t like to be physical,” Beilein said. “And you’ve got to have physical block-outs.

“We’re still looking for the right fit (down low). I expect that to be a competitive spot in the coming weeks, especially with Moe in the mix now.”

The next chance for Michigan’s forwards to improve comes Monday against Elon. The Phoenix beat Charlotte, 85-74 Friday, and led by 27 at halftime before emptying the bench

With six players 6-foot-8 or taller in its roster Elon presents an immediate challenge for the Wolverine forwards.

“I’ve mentioned it to them a lot, we can’t look past anything just because you win a couple games,” Beilein said. “You could lose to any team on this stage if you don’t play well, if you do not come with the right attitude.”