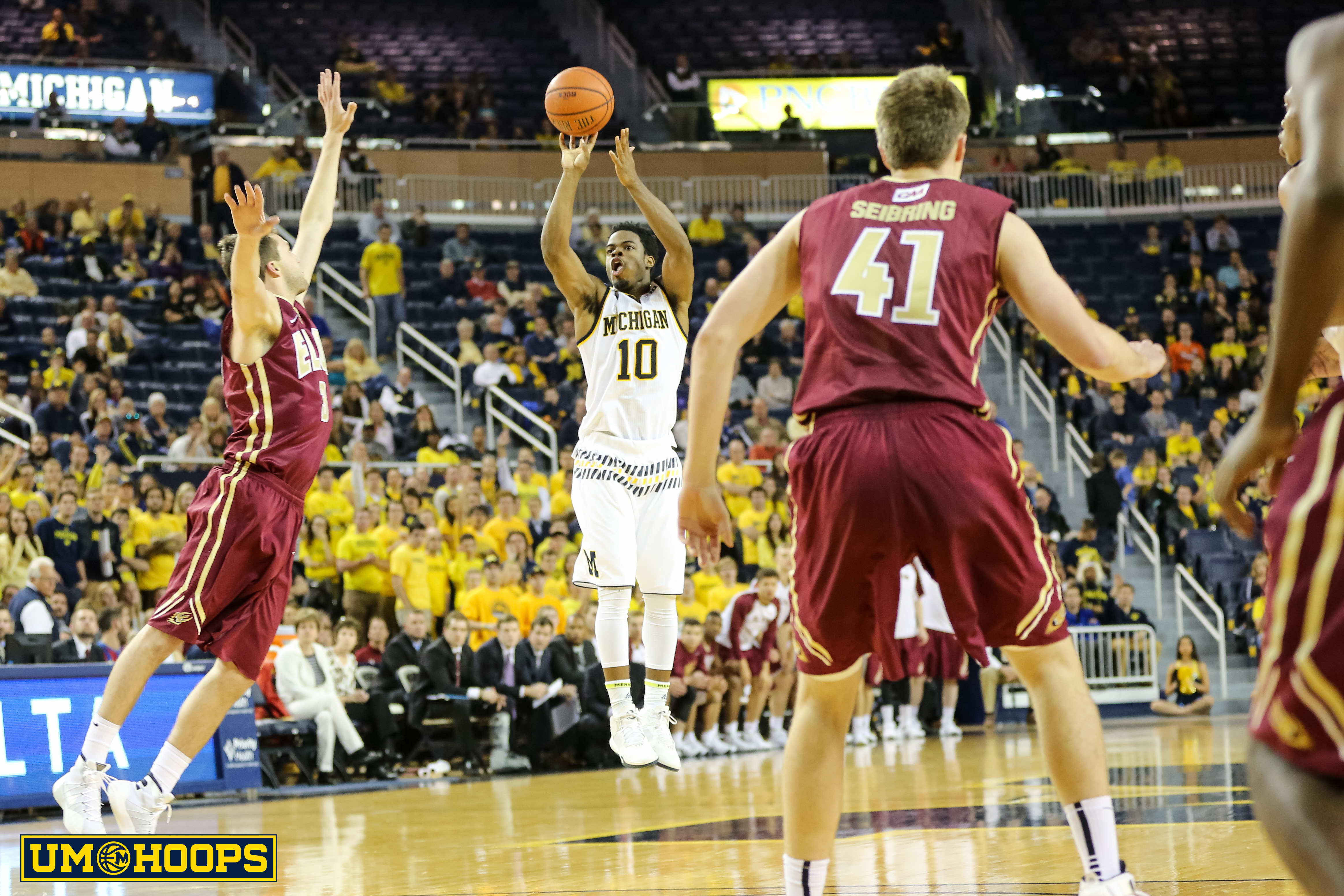 Michigan broke the sort of sweat that it needed to before it enters the heart of its difficult non-conference schedule, knocking off Elon in an 88-68 victory.

Michigan broke the sort of sweat that it needed to before it enters the heart of its difficult non-conference schedule.

The Wolverines always felt like they were in control on Monday evening, but for the first 15 minutes, Elon hung tough. The Phoenix even scratched their way to a lead midway through the first half and kept the deficit in single digits throughout most of the opening 20 minutes. The Wolverines stretched their lead to 10 points by halftime, and in the end the result was never in question, but John Beilein and his coaching staff had a chance to see how their team reacted to a competitive game against a well-coached team.

The biggest lesson of the night was that Michigan’s point guard woke up.

We haven’t seen the real Derrick Walton since he limped off the floor at the Barclay’s Center last November. We saw a shell of him as he battled through injuries his sophomore year, but his breakout performance tonight felt like a major step in the right direction.

For a team that’s still trying to figure out how its deep roster of wing players and scorers fits together, there’s nothing more important than a point guard to get them the ball in the right spots. Walton picked apart the Elon defense in the half court to the tune of seven assists, he created and made a handful of late shot-clock shots off the dribble and continued to be devastating in transition.

He was completely in control of the game and Michigan’s offense cruised to 88 points in 67 possessions.

The Wolverines shot the lights out — 51% on twos, 52% on threes for a 63 eFG% — and the offense had great flow overall. 20 of Michigan’s 31 makes were assisted and the Wolverine offense created plenty of easy looks around the basket. Walton and Robinson did the heavy lifting with 11 made threes, but six other Wolverines found their way to the score sheet. Michigan won the peripheral battles for points off of turnovers and in transition and even won the glass on the night despite some nervous moments.

While we’ve spent so much time worrying about trimming down the rotation, the beauty of this offense might be that they have too many scorers to rely on anyone. Against Northern Michigan, it was Caris LeVert and Aubrey Dawkins carrying the load. Tonight, it was Derrick Walton and Duncan Robinson. The fact that Michigan’s offense could score 1.35 points per possession in a game where Zak Irvin missed all five shots he took and Caris LeVert had just 11 points is a scary sign of what can happen when everything is clicking.

Defensively, there are holes to plug. Elon’s motion offense presented some unique challenges, but it would be more encouraging to hold a team projected near the bottom half of the CAA below a point per possession. Elon rebounded only 29% of its misses on the night, but the rebounding felt far more tenuous than that as there were too many rebounds that landed on the ground or turned into scrums. The Wolverines also seemed to struggle with the new officiating points of emphasis as they were whistled for 22 fouls and Walton, LeVert, Doyle and Wilson were all whistled for at least three, resulting in 18 free throws for the Phoenix.

It was nice to see the Michigan offense break out ahead of Friday’s challenge against Xavier. The Musketeers will be a major step up in competition for a group that won’t face many easy games in the coming weeks as they travel to the Bahamas, Raleigh, NC, and Dallas, TX in the next four weeks.