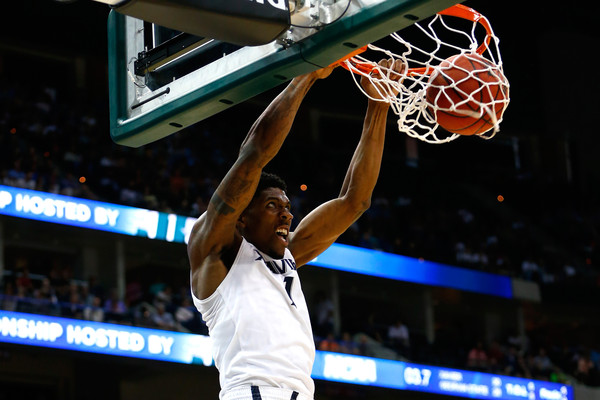 The numbers, faces and even coaches may change, but there’s no secret what you’re going to get when you play Xavier: a tough, physical, winning basketball team.

The numbers, faces and even coaches may change, but there’s no secret what you’re going to get when you play Xavier: a tough, physical, winning basketball team.

The Musketeers have made five Sweet 16s in the last eight years — tied for most of any team in the country — and have won an average of 22 games per season under Chris Mack. Xavier lost two starters from last year’s group which lost to Arizona in the Sweet 16, but returns the rest of its primary rotation.

This game won’t only be Michigan’s most-challenging to date, there are also a multitude of connections and storylines involved. Scoring wing guard Trevon Bluiett had Michigan as a finalist before he made his (original) commitment while big man Jalen Reynolds played his high school basketball in the state before transferring to Brewster Academy. Starting point guard Edmond Sumner also played his high school hoops in Michigan at Detroit Country Day, he ended Derrick Walton’s high school career in the state playoffs.

Suffice to say, Michigan will have its hands full against a Xavier team that has big game talent and experience.

Xavier hasn’t shot the ball particularly well this season (47% on twos, 33% on threes for a 48 eFG%) and has been somewhat turnover prone (giving the ball away on 20% of its possessions), but it hasn’t mattered. The Musketeers have rebounded 44% of their missed shots and attempted 55 free throws per 100 field goal attempts. Offensive rebounds and free throws are the life-blood of the Xavier offense and that’s not just a flash in the pan, it’s been an identity for the program. Just 34% of Xavier’s field goal attempts this season have been threes as it will try to work the ball inside whenever possible, but still has a few reputable shooters that require attention.

Defensively, Xavier has won its first two games by forcing turnovers (24.4% forced turnover rate) and cleaning up the defensive glass (78.5% defensive rebounding rate). The Musketeers have struggled at times with the new officiating rules (allowing 41.3 free throws per 100 field goal attempts) and opponents are shooting 49% on twos and 35% on threes for a 50.5 eFG%.

The Musketeers lost leading assist man Dee Davis to graduation which has allowed 6-foot-6 redshirt freshman Edmond Sumner and 6-foot-2 junior Myles Davis to step into the starting backcourt role. Davis is the better assist man, but is known as a three-point shooter. Well over half of his career field goal attempts from three-point range (career 36% 3-point shooter, 1-of-7 this season), but he’s historically done a good job of getting to the free throw line.

Sumner played in just five games last year while battling tendinitis in his knee and is averaging 15.5 points per game early this year. He’s shooting 50% on twos and 50% on threes, but has just three assists to six turnovers in two games. He’s a long guard with the length to make an impact defensively and he’s terrific at attacking the rim. He’s attempted 10 free throws in each of Xavier’s first two games.

Trevon Bluiett is a guy that Michigan fans will remember from the recruiting process and he was critical in turning the tide in Xavier’s win over Missouri on Tuesday with a second half scoring explosion. Bluiett looks to be in far better shape thanks to a better diet and it shows. He’s a gifted scorer in isolation situations and can create his own offense inside or from long distance.

Indiana transfer Remy Abell starts at the final guard spot, but he’s been one of Xavier’s least efficient offensive options. Abell shot 55% on twos and 41% on threes last season, but he’s made just 1 of 5 twos and 2 of 8 threes with four turnovers this season. JP Macura is averaging 16.5 points per game off the bench for the Musketeers and is shooting 63% on twos, 50% on threes and has attempted as many free throws as field goals (14) this season.

6-foot-10, 270 pound big man Matt Stainbrook is gone, but inside is where Michigan might have its hands full.

Jalen Reynolds measures in at 6-foot-10, 238 pounds and the junior big man, who turns 23 next month, is an explosive rebounder, shot blocker and scorer inside. He was nationally ranked in offensive rebounding (11.9 off. reb rate), defensive rebounding (24.6 def. rebounding rate), block rate (5.6%), fouls drawn (4.6 fouls per 40 minutes) and 2-point shooting (62%) last season for Xavier. Reynolds also can be a bit of a hot head as he’s been whistled for 13 technical fouls (including one in the season opener) during his two years and two games at Xavier. That’s more than anyone else in Division I according to my database at Shot Analytics and only Hampton (29) has been whistled for more player technical fouls than Xavier (24) in that same timespan.

Reynolds struggled against Missouri (he was whistled for four fouls in 15 minutes), but backup big man James Farr (who started the majority of Xavier’s games last season) shouldered the load just fine. Farr, 6-foot-10 and 244 pounds, had 15 points and 14 rebounds in 24 minutes in the win. He’s a plus rebounder, but his two-point shooting numbers (49%) aren’t quite as impressive as Reynolds’.

Ken Pomeroy likes Michigan to win this game at home by a final score of 75-69 and gives the Wolverines a 73% chance of victory. All eyes will be on the rebounding battle inside and watching to see if Michigan’s big men can step up, but this game will still probably be won or lost by the perimeter play. Michigan has terrific, experienced guards, but so does Xavier.

This will be the Wolverines’ most difficult test to date, but with so many more upcoming from the Bahamas to NC State to SMU, it’s an important chance to get started on the right foot.