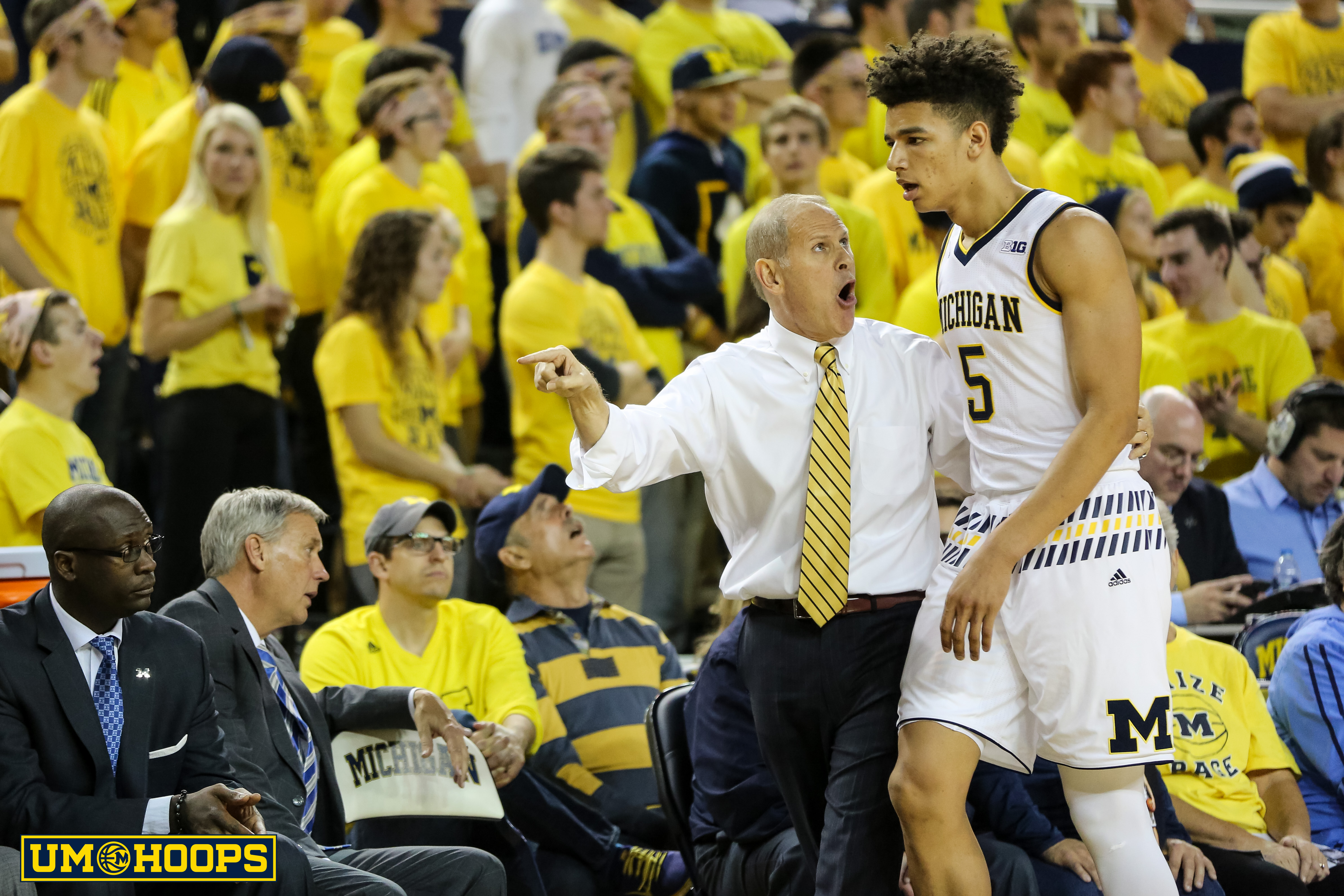 John Beilein joined WTKA’s Michigan Insider program this morning to discuss his team’s development thus far, provide a few injury updates, talk about his recruiting class and even his use of ‘big data’ to make lineup decisions.

John Beilein joined WTKA’s Michigan Insider program this morning to discuss his team’s development thus far, provide a few injury updates, talk about his recruiting class and even his use of ‘big data’ to make lineup decisions.

On the early games: “We really discovered some good things about ourselves, we discovered some blind spots we have to work on or we won’t have success as we go further in our schedule.”

On Zak Irvin: “Frankly, Zak Irvin right now is so much more than just a shooter. His first year he was always measured probably by what did he do from three in that game. He had some incredible perofrmances as a freshman. His defense was okay, but there was actually zero assists and zero rebounding most games when he was a freshman. Now he’s become one of our best defenders, one of our best passers and one one of our best rebounders. All three of those were non-existent as a freshman so that’s really a bigger part of his game as a shooter.”

On Spike albrecht: “His (minutes) limit was because Derrick Walton was absolutely on fire. Every time that we can get (Walton) in those situations where he can play the way we know Derrick can play was huge. What we do with Spike now is just stretching him more in practice as opposed to games so that he’s ready. Foul trouble, just matchups, different things like that we may need him. He’ll play usually a lot more than that. Spike is getting incrementally better every day. It’s going to take time.

“It’s good that he’s on the mend, but we saw last year with Max Bielfeldt that it wasn’t til January when he really started moving like he wanted to move.”

On Duncan Robinson: “He had opportunities to shoot it. We made other penetration, he only had one shot in the Northern Michigan game and I think he got five or six off (against Elon). He’s learning every single day and there are certain things he really brings to us and there are other things he needs to work on. Now that he sees it at high speed in the big arena he can just work on what’s really important for him to bring success to his team. Last year I said a couple of times that if he could have just played five minutes in a couple of games (last season) he could have changed some things. It’s been really helpful to have that kind of length and firepower as far as outside shooting coming off the bench. He’ll make that quick scat pass to people where they’re only open for a second whereas some of our other guys might be delayed in that.”

On Moe Wagner: “We felt the redshirt… You redshirt people and the fifth year is so tenuous. Even with Moe , the professional organizations over there could offer him a lot of money without being drafted. He’s coming along so quickly in practice, we really felt let’s play. Maybe he’ll play, maybe he’s not going to play. He’s really really bright, we’re talking Zack Novak type of bright on the floor where Zack could pick everything up so quickly from day one. That’s where Moe is.

“He went on the board the other day to show me a zone offense. We just smile and laugh. I plan on trying to play him in every game and seeing what happens.”

Are lineups game-by-game? “There’s a little bit of that with matchups. If we’re playing a really small team or a really big team. But what I go with right now is big data. In every four-on-four or better situation from the last two months now, we have big data of who has the most assists, the most rebounds and I look at that big data. Scrimmages, real games, practices on October 4th are entered in this thing and we can say the analytics tell us that these are the best guys on the court. Zak’s injury has been tough, it’s been a great opportunity for guys to play and now we can shorten things up and look at a specific team and everyone can work to get back into the that eight, nine, ten.”

“It’s starting to take shape now as we go further down the road.”

On the Gavitt Tip-Off Games and Dave Gavitt: “Just the whole formation of the Big East at the time that ESPN was becoming a major player in the sports market. It happened out of nowhere a little bit, coincidental. At the same time they took advantage of it. He comes from an old long line of coaches Providence, Georgetown, St. John’s. all of those small schools in the Northeast were so prevalent in basketball and he took that and made this tremendous league. His son Dan is the chairman of the NCAA Basketball Championships, so this is just a great tribute to him. Scheduling is very difficult so it gives us this home game with Xavier, and if we can work it on the back side of the ACC/Big Ten Challenge we’ll always have one really good game that we don’t have to schedule.”

On Xavier: “They are more than a tournament team. I think five of the last eight years they’ve been in the Sweet 16. Michigan has been in two in the last 20. This is a great team. They are a really really good basketball team. They’ll be at the top of the Big East, they have experience. They have a great kid from Ypsilanti here, Jalen Reynolds is a big time player. Edmond Sumner is like a mini Caris LeVert. Two or three local kids here, several kids we recruited and didn’t land and there are some consequences here.”

On the 2016 recruiting class: “We are really pleased with it, I know that people that probably follow the top ratings and things like this. Everybody gets all excited about where kids are rated. We care where kids are going to rated in four years, tow years, next year. This group has such a high ceiling at every position. We really feel good about this class. Who they are their Michigan fits. every body can shoot, every body can pass, either a great athlete or a good enough athlete. it’s exciting to have those four coming this particular year. It’s exciting.