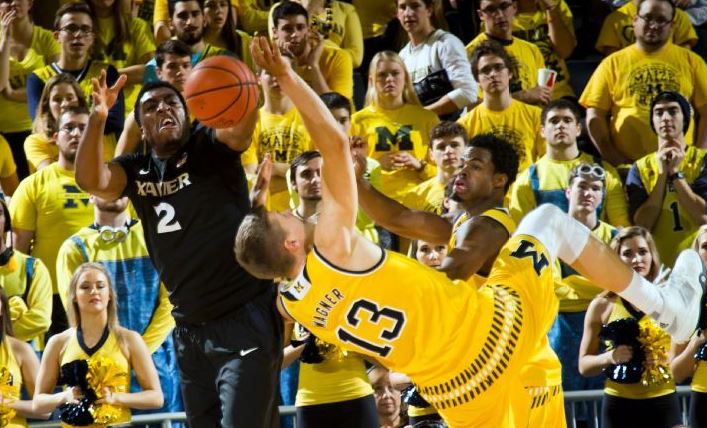 There were a few signs of trouble in Michigan’s opening games, but Xavier walked into the Crisler Center and put everything out in the open on Friday night.

There were a few signs of trouble in Michigan’s opening games, but Xavier walked into the Crisler Center and put everything out in the open on Friday night.

Every question that we’ve thrown around this offseason about this Michigan team was evident.

Xavier overpowered Michigan’s big men in man-to-man post isolations, dominating the points in the paint statistic 34-14. The Musketeers rebounded 45% of their missed shots and outscored Michigan 16-5 in second chance points. Xavier abused the Wolverine wings and guards off of close outs and off the bounce to consistently draw fouls or make layups. The Musketeers even won the turnover battle and outscored Michigan 16-9 in points off of giveaways.

Michigan’s offense looked eerily reminiscent of last year’s early season offense with Caris LeVert carrying the majority of the heavy lifting, he was the only Wolverine to reach double figures with 29 points.

Any one of these problems would probably be expected in any game, especially early in the season, but it was disappointing to see the whole gamut on display in Game 3.

But despite all of the stats, mismatches and flaws on display in this November game, it was toughness that decided the outcome. Twice Michigan cut the deficit to two points in the second half and both times the Musketeers answered with statement three-pointers.

Xavier was the bigger and tougher team an eventually they wore down the Wolverines to the point where JP Macura’s three-pointer extended the lead once and for all. From that point on, Xavier seemed to win every loose ball and rebound. The Musketeers outscored Michigan 25-11 in the final ten minutes after LeVert hit a three-pointer to bring the game to 59-61 and the Wolverines were beaten.

“We have to learn to play harder and smarter and that’s on me,” Beilein said after the loss.

Michigan regressed to a few of its old habits offensively, but still topped a point per possession. The Wolverines settled for too many jumpers and just couldn’t generate any offense at the rim. Just 12 of Michigan’s 52 field goal attempts were at the rim and it made only five. The Wolverines shot the ball well in the mid-range (6 of 14) and from three (10 of 27), but the true test of this offense is whether it was creating easy baskets. There were no easy chances tonight.

One of the underrated disappointments of this game was that Michigan couldn’t control the tempo. This team doesn’t want to play 69 possession games and Xavier killed the Wolverines in transition. Xavier’s 86 points were the most Michigan has allowed since December 2007 and they managed 1.25 points per trip in the track meet.

For much of the first half, Michigan relied on its man-to-man defense and actually held its own on the defensive glass. The problem was that it still couldn’t get many stops. Eventually it started experimenting with the 1-3-1 zone (beginning late in the first half) and a 2-3 zone (midway through the second) and the defensive rebounding went by the wayside. Xavier rebounded 55% of its misses in the second half and the majority came against zone looks.

It was the guards that grabbed almost all of Michigan’s defensive rebounds. The four players who logged the 40 minutes at the five position combined to grab two defensive rebounds. Aubrey Dawkins, Caris LeVert and Derrick Walton grabbed 17 defensive boards. I realize that part of that is by design, but at some point Michigan’s five men have to be able to grab a rebound.

The post play seemed to get a lot of attention, but Michigan’s undoing was its inability to stop anybody off the dribble. Xavier has great drivers that know how to attack, but on the wings the Wolverines had no answer. There are basically five rotation players that have little chance of stopping anyone off the dribble and they combined for 83 minutes. Sure Zak Irvin and Spike Albrecht will get a bit more healthy. Maybe Duncan Robinson will catch up to the pace of the game and Aubrey Dawkins can certainly be more consistent. But it’s going to be tough to get stops (or rebound) when your big man is having to help (usually late) on drivers every possession or you are sending them to the free throw line.

Given Michigan’s roster makeup, I think that the Wolverines need to change some of their approach defensively to focus more on limiting penetration. Having the big man hedge ball screens out to midcourt and recover with his back to the guard just isn’t working. Time and again Xavier ball handlers would get past their man on the recovery and drive right at Michigan bigs without them even seeing the ball. They were taking away the roll, but giving up a layup anyway. Soft hedges and forcing guards to shoot over the ball screen are all the rage in basketball these days because they prevent penetration and it might be time for a more cautious approach.

The UConn team that Michigan will face next has a roster designed like Xavier’s. The Huskies have three guards that can drive and shoot, a 6-foot-7 combo forward with a 7-footer to anchor the middle. There’s no hiding it now. Michigan knows where it needs to improve, but its opponents will too. Early season losses can be forgotten or compound quickly during a conference tournament and the clock is ticking until 9:30 p.m. on Wednesday night.