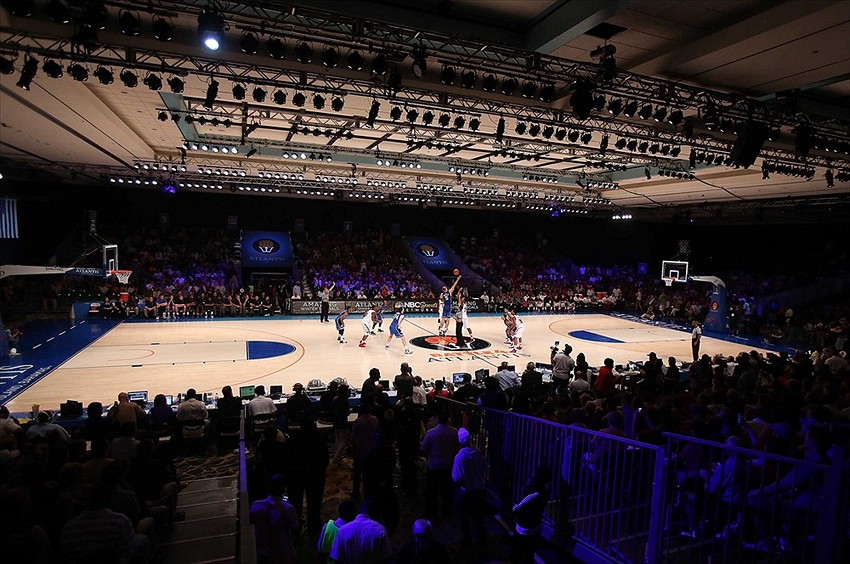 The Battle 4 Atlantis tips off on Paradise Island in the Bahamas on Wednesday afternoon in a converted ballroom at the Atlantis Resort. This will be the fifth year of the Caribbean tournament and Michigan will open play against UConn on Wednesday night. Here are a few storylines we’ll be tracking in the Bahamas.

The Battle 4 Atlantis tips off on Paradise Island in the Bahamas on Wednesday afternoon in a converted ballroom at the Atlantis Resort. This will be the fifth year of the Caribbean tournament and Michigan will open play against UConn on Wednesday night.

Gonzaga is the prohibitive favorite in the event as the only team in the event ranked in the top ten, but including Michigan there are five teams ranked between 25th and 50th in Ken Pomeroy’s adjusted efficiency rankings. Here’s a rundown of the tournament field (in bracket order) with their KenPom ranks on both ends of the floor and overall as well as their odds to win the event.

Michigan tips off at 9:30 p.m. on Wednesday evening and will play in the winners bracket at 3:30 p.m. (ESPN) on Thursday (a 7 hour rest advantage for U-M’s opponent) or 9:30 p.m. (AXSTV) in the losers’ bracket against either Syracuse (who beat Elon by 11) or Charlotte (who lost to Elon at home).

Here’s what we’ll be watching for in the Bahamas from the Wolverines and across the tournament.

After a deflating home loss to Xavier on Friday, Michigan needs to head to the Bahamas in search of two victories. The UConn game will be pivotal — presumably pitting Michigan against either Syracuse in the winners’ bracket or Charlotte (the worst team in the field by a wide margin) in the losers’ bracket — but all hope isn’t lost with an opening loss. The Wolverines would need to take care of business against Charlotte and another 1-1 team (presumably one of the Texas schools) in the consolation rounds.

If Michigan can beat the Huskies in the opener, it has a chance to beat a Syracuse team that it has now beaten twice in its last two tries after a lengthy history of Beilein teams struggling against Jim Boeheim.

There are better and worse ways to get to two wins, but leaving the Bahamas with anything less than two wins would be a major disappointment for a Michigan group that needs a pick me up.

Michigan was abused inside against Xavier and will face plenty of size in the Bahamas. UConn starts a 7-footer in the middle in Amida Brimah, one of the country’s best shot blockers, and has three players 6-foot-10 or taller off the bench. Gonzaga has one of the best front lines in the country. Syracuse’s size and length is always an issue even if the Orange are a bit young in the frontcourt.

Michigan needs more from the four ‘bigs’ on the roster — Ricky Doyle, Mark Donnal, DJ Wilson and Moritz Wagner — especially defensively and on the glass.

3. Consistency from the other guards

Senior guard Caris LeVert has looked terrific in early season action this year, but his help hasn’t been dependable. LeVert was the only Wolverine to reach double figures against Xavier and he needs more assistance offensively. Derrick Walton and Aubrey Dawkins both reportedly had big summers and they’ve both shown flashes of strong play, but they’ve also played a couple well below average games.

Michigan needs Walton and Dawkins to produce consistently to reach its ceiling, or even its floor this season. They’ve both shown they can do it in spurts, but if this team is going to start to gel then they’ll have to get it going quickly in the Bahamas.

Michigan was whistled for 23 fouls against Xavier and 22 fouls against Elon. The Wolverines have only committed more than 20 fouls in one other game (vs. Stanford in Dec. 2013) in the last two years.

Michigan doesn’t have a great perimeter defensive team and lacks a rim protector inside. With the emphasis on driving and creating contact, the Wolverines are going to have to figure out a way to stop fouling.

This is a program that that has ranked in the top ten nationally in the last three season at keeping opponents off of the free throw line and the defense isn’t going to work if the Wolverines are giving away freebies at the stripe.

Since Michigan beat Shaka Smart and VCU in the 2013 NCAA Tournament, the Wolverines and Smart have played in the same preseason tournament every season. Smart led VCU to the Puerto Rico Tip Off two years ago and the Legends Classic last season. This year Smart is in his first year coaching the Texas Longhorns, who reside on the other side of the bracket from the Wolverines.

Despite playing in the same tournaments every year, Michigan hasn’t had a rematch against Smart’s ‘havoc’ defense since its undressing of the Rams in the 2013 NCAA Tournament. Could this be the year that Michigan and Smart finally get their rematch?

6. Gonzaga is the favorite

Gonzaga is the highest ranked team in the field and slept-walked through its two opening wins over Northern Arizona and Mount St. Mary’s.

The Bulldogs are loaded with size and talent. All-American candidate Kyle Wiltjer is one of the nation’s elite scorers at 6-foot-10. His shot chart is a reminder that he can score anywhere on the floor. Wiltjer is joined by 7-foot-1 senior Przemek Karnowski and Lithuanian freshman big man Domantas Sabonis (averaging 20.5 points and 10.5 rebounds per game off the bench), making the Zags front court one of the best in the country.