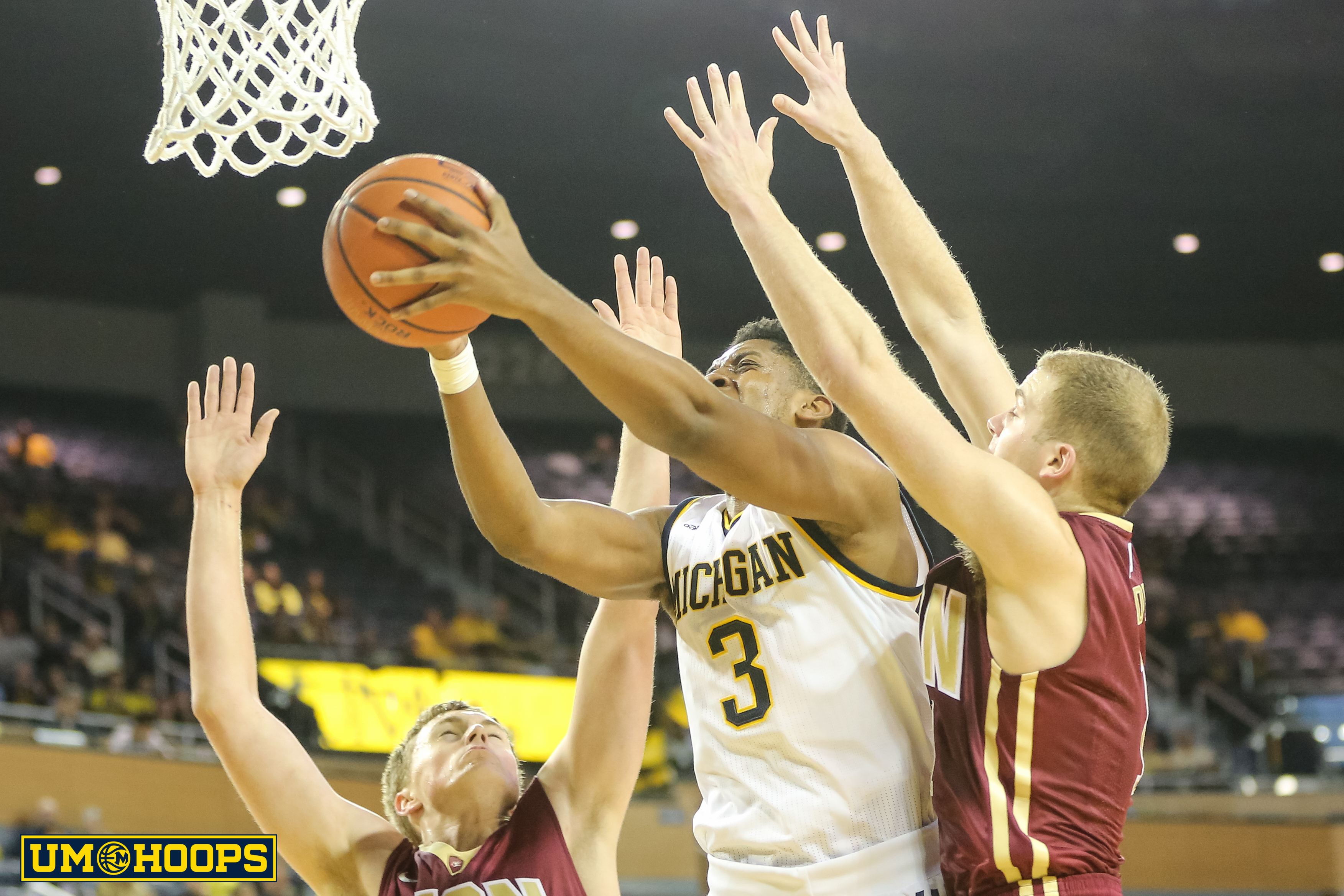 Now, with a humbling loss in the past, the Wolverines are set to travel to the Bahamas for their first try at the Battle 4 Atlantis. The three-day tournament includes No. 10 Gonzaga, No. 18 Connecticut, Syracuse, Texas, Texas A&M, Washington and Charlotte.

In its 16-point loss to Xavier, the Michigan basketball team was figuratively and, at times, literally beat up.

From start to finish in the drubbing, the Wolverines were outmuscled at the glass, allowing an offensive rebounding percentage of 45 while getting just 19.4 percent of their own misses. Though it wasn’t the case on paper, Michigan was outsized, too, as its four big men combined for as many fouls (11) as points (nine) and rebounds (two) combined.

Now, with a humbling loss in the past, the Wolverines are set to travel to the Bahamas for their first try at the Battle 4 Atlantis. The three-day tournament includes No. 10 Gonzaga, No. 18 Connecticut, Syracuse, Texas, Texas A&M, Washington and Charlotte.

With five of eight teams making the NCAA Tournament, the trip will ensure Michigan has a quick turnaround between early-season tests.

“This has turned into a monster tournament, and I mean that in a good way,” said Michigan coach John Beilein. “It’s a tremendous venue and a great opportunity for us to grow as a team and we have really important challenges ahead of us.

“There’s nothing that makes you better than playing games. So we’ve always found that this (tournament) setting, every game you have to turn it around, focus, do it again, and it makes teams better.”

First up for Michigan is UConn, who is also looking to return to the NCAA Tournament after a disappointing season 2014-15 season.

Much like Xavier, the Huskies are driven by a strong frontcourt presence, particularly 6-foot-7 wings Shonn Miller and Daniel Hamilton and 7-footer in the middle Amida Brimah.

“We haven’t had a physical mismatch yet,” Beilein said, noting that his team actually has good length on paper. “Connecticut has (Miller and Hamilton), they won’t be bigger than us. We just have to continue to work at the technique of boxing out, of going after the ball strong with two hands, not watching the ball, not waiting for someone to get it — you have to go get it

Though even good Michigan teams haven’t won games off the boards, it doesn’t appear Michigan holds substantial advantages in 3-point shooting and passing, either.

After tallying just eight assists in Friday’s loss, the Wolverines assist on just 54.4 percent of their field goals, while UConn does so at a 59.2-percent clip. Shooting, a supposed strength for Michigan, is nearly dead-even, with the Wolverines’ eFG (57.01%) barely edging out the Huskies’ (56.82).

The even matchup outside means that, if Michigan wants to have a chance at winning, it needs to improve down low. Beilein said that he wants to trim the rotation down from 12 to eight or nine, but has yet to see his forwards differentiate themselves.

“We’ve got to make decisions now,” Beilein said. “Get some guys off the bubble, play some guys, and then, if that thing changes, play some new guys and put other guys on the bubble.”

“We’ve got to make decisions now,” Beilein said. “Get some guys off the bubble, play some guys, and then, if that thing changes, play some new guys and put other guys on the bubble.”

With so many players floating in and out of the rotation, the Wolverines are not only trying to trim the rotation to improve talent, but to solve their identity crisis.

“We’re very much a work in progress right now,” Beilein said. “We’re still trying to figure things out. We just added Zak (Irvin) back into things that adds a new element, (another question is) how much better have guys gotten from last year?

“We are trying to figure out who we are, and I think we figure it out a little bit more every day, so that as we head into Big Ten season, we have a plan of attack.”

Depending on if Michigan wins or loses, it will face the respective winner or loser of the Syracuse-Charlotte game on Thanksgiving Day, and then play a final game on Friday against one of four other opponents.

Though the trip is meant to be a business trip, the resort is about 50 degrees warmer than Ann Arbor. The white Michigan snowfall outside the Crisler Center will be replaced by sandy beaches.

Beilein wants his players to enjoy the sunshine, but remember that early-season wins will make his team’s future much brighter.

“We’ll keep (the players) pretty busy,” Beilein said. “Hopefully, we don’t have anybody coming back with tans. … It’s the fans that get to have some break time before the winter hits. It won’t be us.”