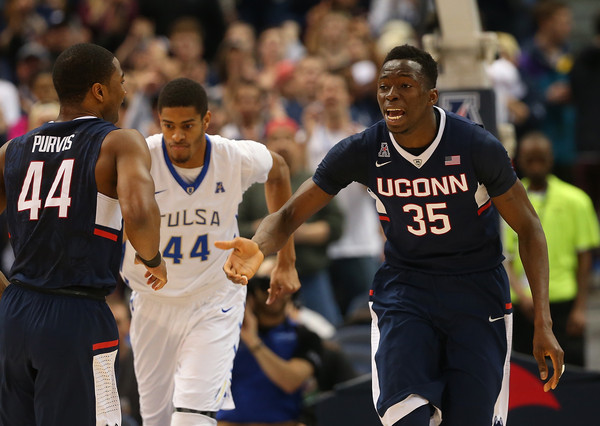 Michigan will play the final game of the day at the Battle 4 Atlantis when it takes on the Connecticut Huskies at 9:30 p.m.

Michigan will play the final game of the day at the Battle 4 Atlantis when it takes on the Connecticut Huskies at 9:30 p.m.

In many ways, the Huskies mirror the Xavier team that Michigan faced on Friday. They are anchored by a 7-foot shot blocker, rebounder and finisher in the middle and have an array of versatile guards and wings to surround him with.  While the Huskies are far from an identical team to the Musketeers, they will certainly provide an opportunity for Michigan to show how much it has improved in some of its deficiencies since Friday’s loss.

UConn certainly hasn’t faced an opponent as tough as Xavier to date. The Huskies trounced Maine (313 KP), New Hampshire (164 KP) and Furman (209 KP) by an average of .43 points per possession.

Kevin Ollie coaches a guard-heavy perimeter-oriented offense that is heavy on three-pointers and ball possession. UConn is shooting 61% on twos (15th) and 37% on threes for an impressive 58.6 eFG% (20th). Despite the efficient two-point shooting, 41.1% of UConn’s shots have been triples, similar to some of Michigan’s best offenses that hit threes to create easy twos.

Connecticut has been just average on the offensive glass — rebounding 34% of its misses (104th) — and hasn’t done a good job of getting to the free throw line despite the new rule changes. The Huskies have attempted just 29 free throws per 100 field goal attempts, 291st nationally according to KenPom. That stat doesn’t appear to be an aberation either, UConn has ranked 233rd or worse in offensive free throw rate over the last two seasons. So while this UConn offense has talented, versatile guards that can shoot the three, it doesn’t appear to be quite as dynamic and effective at attacking and getting to the line as the Xavier group that Michigan faced on Friday.

Defensively, UConn’s success is built around Amida Brimah. Through three games, UConn has blocked a NCAA-best 23.5% of its opponents’ shot attempts. Husky opponents are shooting just 35.7% on twos, 30.9% on threes and a meager 40.5 eFG%.  UConn doesn’t force many turnovers and is just average on the glass and at keeping opponents off of the charity stripe, but it is almost impossible to score on, around or over Brimah in the middle.

UConn’s roster is heavy on perimeter talent and also features several players who began their careers somewhere else.

6-foot-2 guard Sterling Gibbs started his career at Texas before playing the last two years at Seton Hall. The point guard is playing a graduate transfer year at UConn and he’s shooting 78% on twos, 40% on threes and 100% at the free throw line through three games this season. His assist numbers are down from his time at Seton Hall, presumably due to the role he plays in UConn’s offense.

6-foot-4 junior guard Rodney Purvis is a NC State transfer starting his second year at UConn. He had a huge finish to last season and has been playing well to start this year. Purvis shoots 64% on twos and 48% on threes and handed out seven assists in UConn’s most-recent win over Furman.

Daniel Hamilton, a 6-foot-7 jack-of-all-trades who mans the wing at 6-foot-7, is averaging 9 points, eight rebounds and six assists per game. The versatile forward has a high usage rate and is involved in over a quarter of UConn’s offensive possessions, but he’s the least reliable shooter (40% on twos and 34% on threes last year) in the rotation.

6-foot-7 forward Shonn Miller mans the four spot. Michigan showed some interest this fall when Miller was transferring from Cornell and the four-man is an adept finisher who can block shots and grab defensive rebounds.

In the middle, Amida Brimah is the No. 2 shot blocker in the country this year (a title he held last year as well) and is an elite offensive rebounder. He’s not as strong of a defensive rebounder (his wings seem to clean up the defensive boards as he chases blocks), but he’s shooting 69% on twos this season. Offensively, he’s more limited than Xavier’s Jalen Reynolds, but Beilein remarked about how effective the UConn guards are at creating dribble penetration and throwing the lob up to Brimah behind the defense.

Freshman Jalen Adams is the first guy off the bench. The consensus top-25 player out of high school is shooting 55% on twos and 43% on threes this year, but his turnover numbers are still a bit high as he adapts to the college game.

KenPom projects a 68-67 UConn win, giving the Wolverines a 45% chance at knocking off the Huskies. By the numbers, this should be a strength on strength battle with UConn’s defense and Michigan’s offense both ranking in the top 15 nationally.