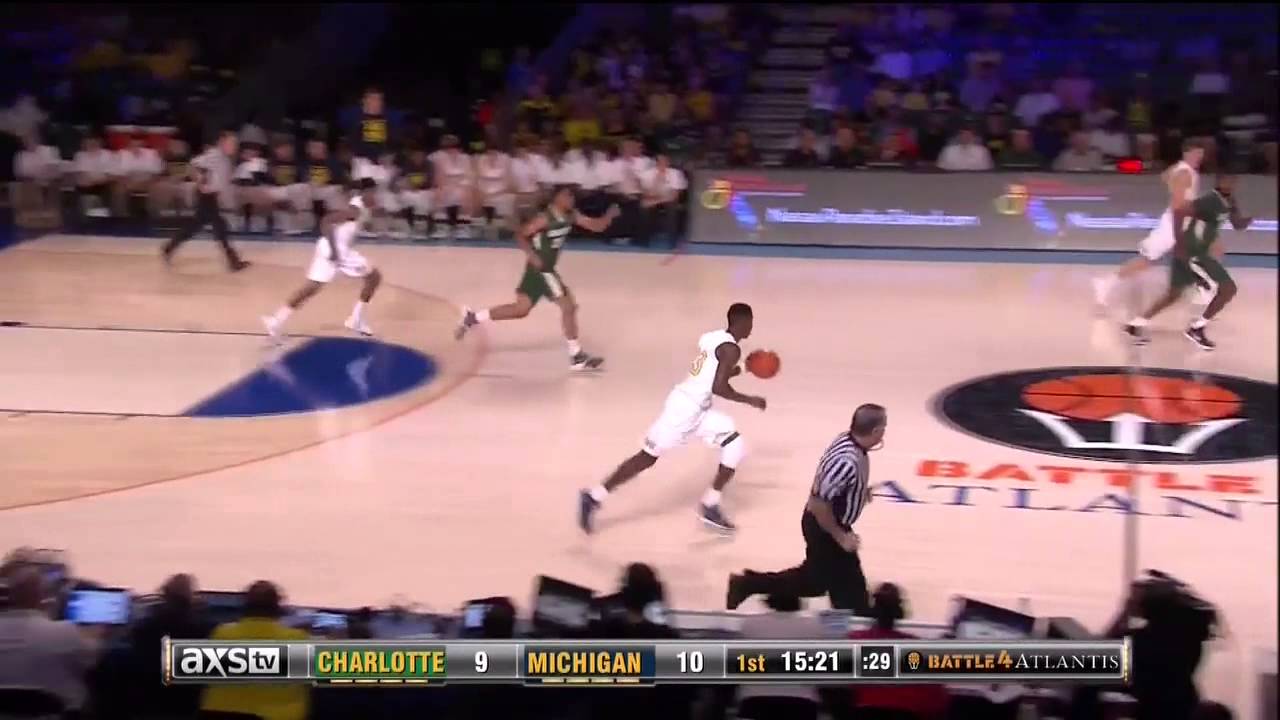 With plenty of highlights and good moments during the Thanksgiving win, we look at the five key plays from the night.

After some trouble in paradise to begin the Battle 4 Atlantis, the Michigan basketball team had smooth sailing in Thursday’s game. The Wolverines dominated from start to finish, defeating Charlotte, 102-47. The 55-point win was Michigan’s largest since Jan. 11, 1946, when they beat Chicago, 81-23.

With plenty of highlights and good moments during the Thanksgiving win, we look at the five key plays from the night.

Though the star of the night was freshman forward Moe Wagner, the most promising performance may have belonged to junior forward Zak Irvin. Undergoing back surgery in August, Irvin didn’t crack the starting lineup until last week. Even when he did play, it wasn’t pretty. Prior to Thursday, Irvin was 4-for-21 from the field and just 1-for-13 from 3-point range.

That all changed early in the first half against the 49ers. Whether it was by himself or with good plays from his teammates, Irvin found open looks early. He went 4-for-7 from the field to end up with a season-high 12 points and four assists.

“It’s one thing when you’re shooting in your shooting drills but it’s something different when you’re playing in a game and you’re tired and on the run,” said Michigan coach John Beilein. “It was encouraging to see him knock down that first one which was a beauty and then every other one looked like it was going to go in. I think that was a big part of the game today.”

Of course, even Irvin’s best efforts couldn’t overshadow Wagner’s breakout game. Despite having played sparingly and only scoring four points in the Wolverines’ first four games, Wagner dominated against Charlotte, the 6-foot-10.5 German forward was 8-for-9 from the field, and made his one 3-point attempt. He led the game with 19 points, well surpassing his previous high of two.

Already growing as a fan favorite back in Ann Arbor, Wagner raised eyebrows in the Bahamas just over five minutes into the game with a pump fake, spin move, then a layup that drew a foul and got his scoring started. There were many more, as Wagner solidified himself as the team’s No. 2 big man.

Beilein has noted all season that Wagner is far from conventional on the court, but shows flashes of brilliance from time to time, including Thursday.

“We don’t see all of that in practice every single day,” Beilein said. “But we do see the energy and the passion every day. Just having that the team loves him as you can see. He’s very skilled and I think we told you earlier in the year that there are minutes he’ll look awkward, but there are other minutes you’re going to say ‘wow’ as he grows his game, learns to play better defense and rebound better.”

Sophomore and starting forward Ricky Doyle only needed to play 11 minutes in the blowout win, but he made sure his presence was felt early on. With 7:45 to go in the first half and Michigan up by 10, Irvin lofted a pass over the basket to Doyle, who threw it down for the jam.

It was a near-meaningless play in the game, but throughout the still-young season, concerns have risen about the toughness of Michigan’s big men. Wagner had the points Thursday, but Doyle’s six points, four rebounds and alley-oop dunk leave plenty of optimism about the starting five man for the future.

Michigan had plenty to feel good about when it went into halftime leading 44-22, but it came out in the second half with even more energy.

Behind good ball movement, good shooting and just good basketball in general, the Wolverines scored 10 points in 2:07 to turn the 22-point lead into 30. By the time Michigan finally missed with 13:47 to go in the game, it had outscored the 49ers 22-8 in the second half and looked unstoppable.

The Wolverines will look back fondly on their 104 points, but their 21 assists may have been more significant after combining for just 16 in losses to Xavier and Connecticut.

Among those surging in the second half for Michigan was redshirt sophomore forward Duncan Robinson. The three-point specialist was quiet in the Wolverines’ losses, shooting a disappointing 3-for-13 and scoring just 14 points, but was back in the habit Thursday.

Playing mostly in the second half, Robinson scored nine points — all 3-pointers — in 19 minutes. Beilein noted after the game that Robinson may be a streaky shooter early on in the season, but is beginning to see the consistency shown against Elon, when he scored 19 points on six shots.

“It’s all they have to do,” Beilein said. “If you remember Duncan’s first game against Northern Michigan, he didn’t take a shot and then all of the sudden against Elon he’s on a run.”