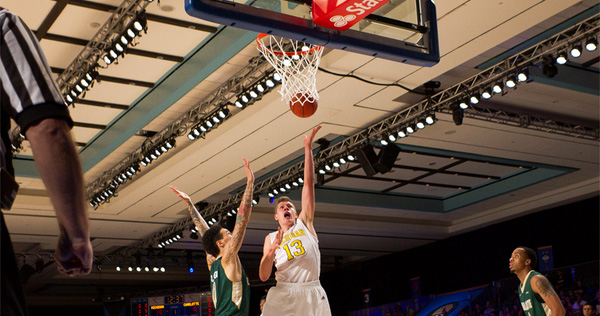 After a pair of demoralizing losses, Michigan got the pick-me-up it needed with a 102-47 trouncing of Charlotte.

After a pair of demoralizing losses, Michigan got the pick-me-up it needed with a 102-47 trouncing of Charlotte.

Moritz Wagner was the star for the Wolverines, finishing with 19 points on 7-of-8 shooting, but 11 different Michigan players scored and four reached double figures despite no one playing more than 25 minutes in the blowout.

The win was a boost for a faltering Michigan squad, but it’ll have to take the next step and build off the performance against Texas tomorrow evening to make the trip to the Bahamas a success.

Michigan’s 102 points and 1.47 points per possession were its best offensive performance since December 7th, 2013 against Houston Baptist. There was no secret to the Wolverines’ offensive explosion: they hit open shot after open shot. Michigan shot 68% on twos and 52% on threes for a 71% effective field goal percentage. Michigan hit 10 of 15 treys in the second half after making only 2 of 8 long range efforts in the first.

Defensively, this was Michigan’s best per-possession showing since December, 2012 when it held Western Michigan and Binghamton below .67 points per trip in consecutive weeks. Charlotte’s offense was dysfunctional at best, but the lone bright spot might be that the Wolverines held an above-average offensive rebounding team to just an 18% offensive rebounding rate. Derrick Walton (8 defensive boards), Kameron Chatman (6) and Aubrey Dawkins (4) all had impressive days on the defensive glass in the victory.

This win didn’t teach us much about Michigan. Charlotte is probably going to give up 100 points in a few more games this season and it probably won’t face many teams that will be as motivated as Michigan was tonight to really prove that they can run up the score. The Wolverines needed this game for their own mental psyche after missing so many open shots against UConn on Wednesday and now will have another chance against a very good Texas team.