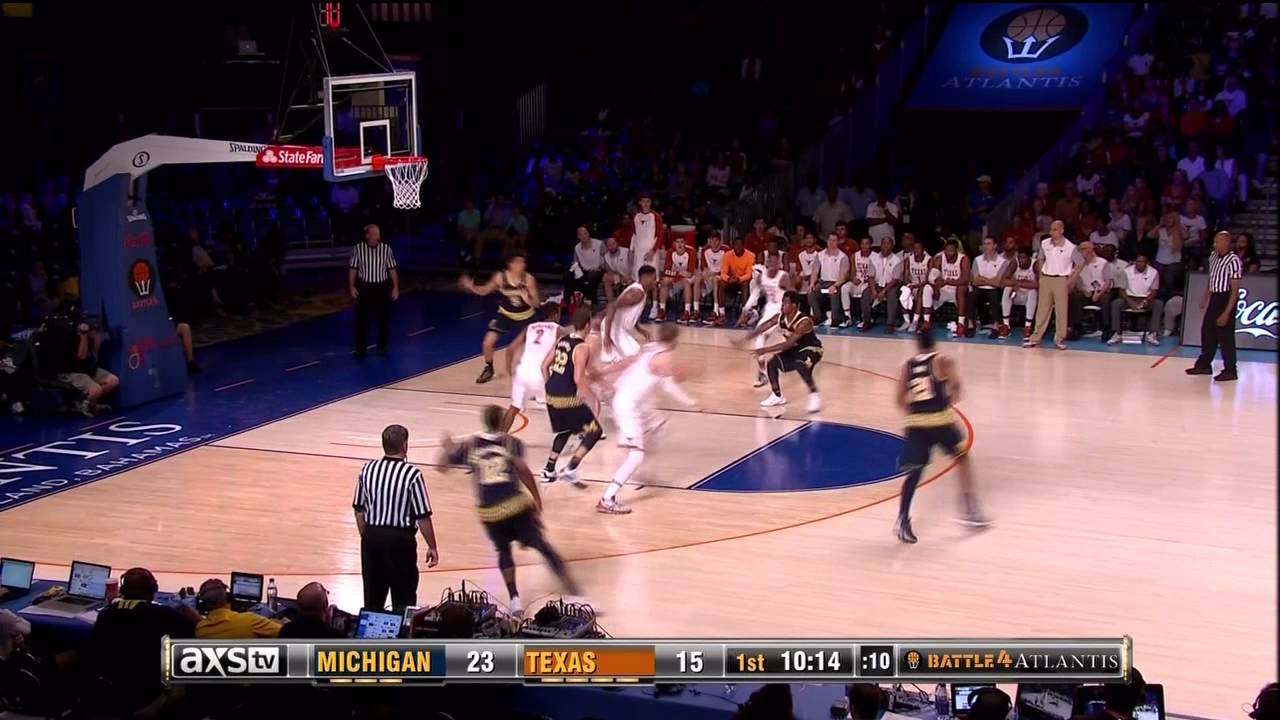 Michigan led by as many as 13, never trailed in the contest, and eight different Wolverines scored in the easy win. There were plenty of highlights from start to finish; here are our five key plays.

Though the Michigan basketball team has returned from its trip to the Bahamas, its future looks a little brighter in Ann Arbor than it did in the beginning of the trip.

In the week since the Wolverines got blown out by Xavier and UConn, they salvaged their first win over a major conference opponent, beating Texas on Friday, 78-72.

Michigan led by as many as 13, never trailed in the contest, and eight different Wolverines scored in the easy win. There were plenty of highlights from start to finish; here are our five key plays.

1. Derrick Walton dishes it out

Junior guard Derrick Walton Jr. has had a streaky season thus far. At times — like his 24 point, six rebound, seven assist performance against Elon — he has looked like one of the best players in the Big Ten, but there have been games where he faded.

Friday was not one of those games. Walton controlled the court from start to finish, matching a season high with seven assists, including five in the first half. Even though he passed the ball, Walton created space for his teammates through aggressive drives, only to set his teammates up for the easy score.

He made his own plays too, of course, but when his seven assists create 18 points, his 13 points mean less.

When redshirt sophomore forward Duncan Robinson began the Battle 4 Atlantis by shooting 1-for-8 against UConn, it raised questions about his effectiveness against bigger teams. But when the team was outsized again against the Longhorns, Robinson looked like his usual hot-shooting self.

Led by three first half 3’s on as many attempts, Robinson kept the offense flowing and helped push Michigan out to a 12-point halftime lead.

“Having Duncan come out against high, high-level talent and just not flinch,” Beilein said. “It was great.”

Added Robinson: “The more games you play, the more comfortable you get around the team. I think this trip was big for both on the court and off the court to get closer.”

Robinson is now shooting 60% from three-point range (28th nationally) and his offensive rating of 149.6 points per 100 possessions is 17th best in the country.

Despite the early success against Texas, Michigan found itself in a one-possession game toward the end of the second half thanks to a 19-8 Longhorn run.

The Wolverines are still solidifying rotations and roles on their team, but one role is indisputably clear: when things go wrong, senior guard Caris LeVert is the man for the job.

LeVert rose to the occasion Friday, making back-to-back layups to restore the Wolverines’ lead, and finished the contest with a game-high 19 points. The 6-foot-7 wing guard was able to play a complementary role at times (his first points didn’t come until late in the first half), but when the Wolverines needed him he was always ready. These two moves are both the sort of big time plays you expect from a future NBA player as LeVert makes a nice take baseline and then gets to the rim on the pick and roll.

Through six games, LeVert is second in the Big Ten with 18.5 points per game to go with 4.5 rebounds and 4.0 assists.

Right after LeVert gave Michigan some breathing room, Walton was back to making his presence known. Longhorn guard Isaiah Taylor had a hot second half, and was looking to add to his team-high 18 points with is team only trailing by five.

But Walton stood pat, drawing the charge and swinging momentum all the way in Michigan’s favor. The Wolverines had struggled to get stops down the stretch and Taylor had gotten away with a similar play on the two previous possessions against Walton.

“Every punch we made they made themselves,” Walton said of the back-and-forth second half. “To make that play in that moment in time was really big for us. It kind of shifted things for us in our favor.”

The Wolverines haven’t had much to write home about defensively so far in this season (KenPom has them as the nation’s 119th best defense, allowing 1.00 points per possession), but the physical play by the veteran Walton gives Beilein and his team something to aspire to on the defensive side of the ball.

Throughout the preseason, Beilein has stressed that his team has not yet settled its rotations, and much of that depends on how Zak Irvin recovers from back surgery in August.

The junior guard appeared to be close to 100-percent healthy on Friday. Irvin played in 28 minutes and scored 13 points, both season highs.

Perhaps the most important points of his night however, came right after Walton drew a charge in play No. 4. Leading by just five, Irvin took control on the next possession, came off a double ball-screen and drained a 3-pointer, just his fourth of the season, to put a dagger in Texas’ comeback effort.

John Beilein praised this play as one of the most important in the game and it finally gave Michigan the breathing room it needed down the stretch.

Whether it was LeVert’s buckets, Walton’s defense or Irvin’s dagger, Michigan’s start players shined Friday, and it resulted in a Michigan win.