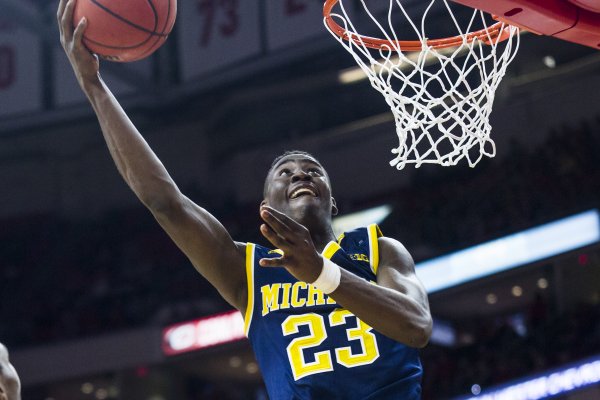 It’s taken a few games, but Michigan is starting to remember how to win.

It’s taken a few games, but Michigan is starting to remember how to win.

The team that took the court against Xavier and UConn looked scared of the big moment. They were pushed around, out-hustled and struggled to hit important shots. After a season that saw almost as many losses as the previous two combined, who can blame them?

Michigan’s veterans that played down the stretch last year aren’t 100% and the ones that are healthy were sitting on the bench watching those losses. The Wolverines hadn’t figured out how those pieces fit together in early November, but have a much better idea now.

“I don’t know about identity, but I’m starting to learn more about the buttons to push defensively and offensively,” John Beilein said after the win. “What they can handle right now.”

The Wolverines still might not have accomplished anything out of the ordinary with wins over Texas in the Bahamas and NC State in Raleigh, but those are nice solid non-conference victories for a team carving out a new identity that looked borderline shell-shocked last Wednesday in the Bahamas.

Michigan earned its first road win since last January at Rutgers and appears to have found direction and confidence with one more major non-conference test to go next week at SMU.

There’s nothing wrong with winning ugly from time-to-time. Michigan’s offense scored a pedestrian 1.04 points per possession on the night, but its defense held NC State to just .93 points per trip (its second best defensive game against a Division I team this season).

Michigan’s first half defensive effort was tremendous as it only allowed NC State to attempt 3 free throws and rebound 15% of its misses in the first 20 minutes. Those numbers both regressed toward the mean in the second half as the Wolfpack attempted 21 second free throws and rebounded 43% of their misses, allowing them to cut the lead to four points late. Despite the fact that Derrick Walton is Michigan’s shortest player, his absence can’t be overlooked on the defensive glass (where he led Michigan entering today’s game).

The Wolverine defense did a lot of things well including holding the bigger and stronger NC State to just 43% shooting at the rim and a 36 effective field goal percentage. NC State isn’t a good shooting team, but Michigan did a good job of forcing it into low percentage shots.

In perhaps the most impressive, and telling, statistic of the night the Wolverines outscored the Wolfpack 28-18 in the paint.

Offensively, Michigan was streaky but deadly. The Wolverines missed 7 of their first 9 shots to open the game and 5 in a row midway through the second half, but those two cold streaks accounted for half of the team’s misses. Michigan turned the ball over a bit too often  (17% of possessions) and didn’t get anything on the offensive glass, but it is going to win most games where it shoots 61% on twos and 35% on threes. The 2-point shooting was a great sign for the second straight game as Michigan made 12-of-18 attempts at the rim and had the pick-and-roll game clicking (Doyle and Wagner combined for 14 points and 6 rebounds on 11 shots).

Michigan couldn’t afford to drop this game. Not with two losses already on its resume and not with a trip to Dallas on the docket next week. Walton’s injury is a major concern, even if Beilein says that it’s not expected to be a long-term injury going forward, but if Michigan can figure out a way to win at SMU it can be in great shape entering the Big Ten season.