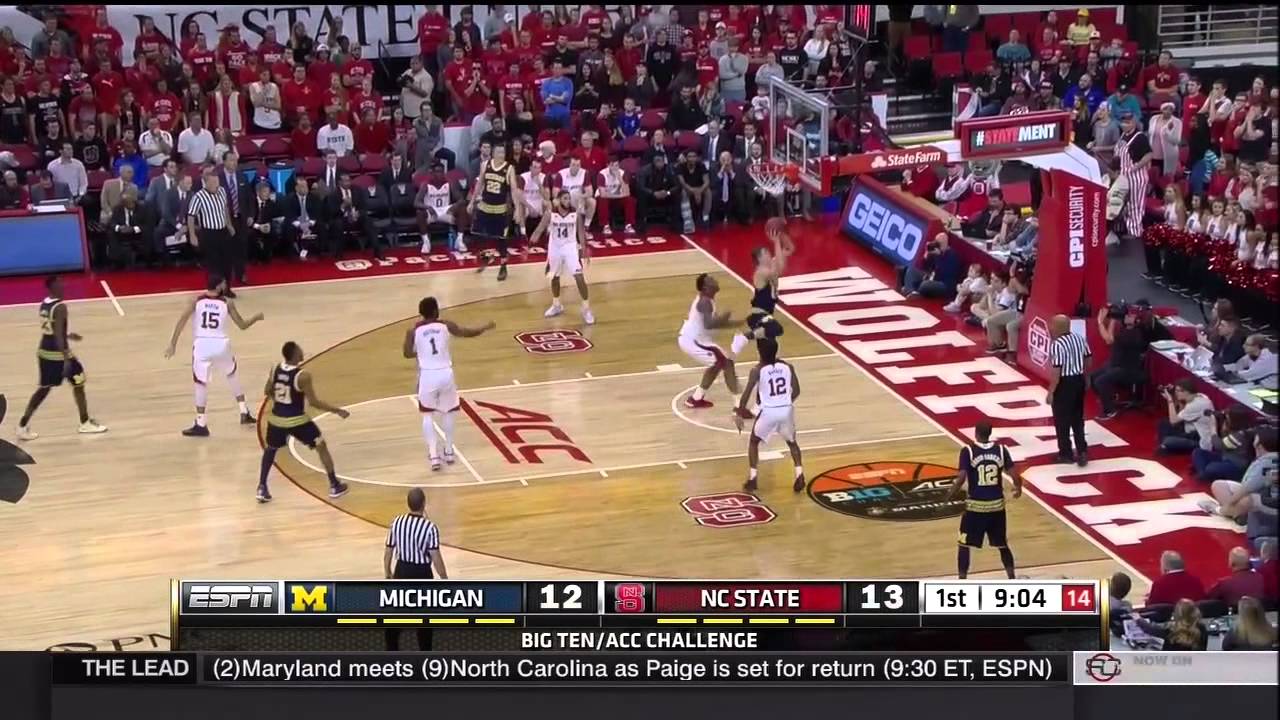 For the second game in a row, the Michigan basketball team battled a high-major opponent with considerable size and matchup advantages inside. And for the second time in a row, Michigan came away with the win.

For the second game in a row, the Michigan basketball team battled a high-major opponent with considerable size and matchup advantages inside. And for the second time in a row, Michigan came away with the win. Though it was neither team’s best effort, the Wolverines held off a late rally by North Carolina State to leave Raleigh with a 66-59 victory.

Now 5-2, Michigan still has plenty to learn and several roles to fill, but provided plenty of highlights and lowlights Tuesday night. Here are our five key plays from the game.

It’s become so routine for freshman forward Moe Wagner to surprise everyone with his play, it might not be considered a surprise anymore.

Quickly becoming the fan favorite among Michigan faithful, Wagner continued to improve and impress against the Wolfpack. The top moments came midway through the first half, when Wagner showed off his impressive hands and finishing ability with a great catch under the basket, then finished consecutive drives with a lay-in, then a one-handed slam to bring the Michigan bench to its feet.

By game’s end, Wagner looked like the Wolverines’ best option down low for the third-consecutive game, collecting eight points, two rebounds and helping shut down the nation’s ninth-tallest team in the post. In total, Michigan outscored NC State in the paint, 28-18.

Perhaps more routine than Wagner’s out-of-nowhere play is redshirt sophomore forward Duncan Robinson’s shooting. Robinson had an eFG% of 106% on the night, nailing 5 of 7 3-pointers and scoring 17 points overall. He’s shooting 63% on threes this season (17th best in the country) despite his 1-of-6 night against UConn in the Bahamas.

His biggest contribution came with just under seven minutes remaining in the first half, however. With the score tied at 18 and a NC State crowd of 17,645 still very much into the action, Robinson knocked down a 3. Then he did it again.

The shots sparked a 10-0 mini-run for the Wolverines, and gave them a lead they would never relinquish.

“(His shooting) is deadly,” said senior guard Caris LeVert. “When he hits a couple in a row, you wanna look for him every time you can. … He just knocks them down.

“If we were playing against a guy like Duncan, we would never leave him open.”

3) Walton goes down with injury

Though it only technically resulted in a Wolfpack three, the most important moment of the game came with three minutes to go in the first half. Tripping on a teammate’s foot in transition, junior guard Derrick Walton Jr. was visibly in severe pain before being taken out of the game.

Even then, things only slightly improved, as Walton had his head covered in a towel before being taken to the locker room. The injury had many worried that Walton had re-aggravated a nagging foot injury he suffered from last season.

Fortunately, it was ruled an ankle injury, but Walton sat the remainder of the game. The post-game prognosis indicated it didn’t look like a long-term injury, but Beilein has learned to take any timetables with a grain of salt.

“I don’t know how long [it will take to heal],” said Michigan coach John Beilein. “There is a slight sprain there, so we’ll have to know more, probably before Saturday.

“The sooner the better. … It looks like it’s not going to a long-range thing. That’s the hope.”

Prior to the injury, Walton had four points, two rebounds, two assists and a steal in 13 minutes of action.

4) Zak and Duncan save the day

Amidst awful shooting, the Wolfpack managed to put together a free throw propelled run and narrowed a 15-point lead to four with seven minutes to go with a 16-5 spurt.

Unable to finish possessions, the Wolverines resorted to a familiar strategy — find Robinson in the corner and hope for the nest.

On the next possession, good ball movement found junior forward Zak Irvin open in the corner. Irvin is shooting a paltry 18 percent from beyond the arc this season, but he wasn’t going to miss an opportunity to bury NC State and extend the lead back into double-digits.

“There’s been very few road games I’ve had in all these games where the home team does not make a push in the second half,” Beilein said. “I probably talk about it a little too much to make sure we’re ready for it.

5) Ricky Doyle not out yet

Among the many roles yet to be filled this season is the go-to post presence. Despite Wagner’s flashes of brilliance, his lack of physicality prevents him from logging serious minutes. Instead, that role has been handed to sophomore forward Ricky Doyle — even if somewhat by default.

The sophomore struggled at times on Tuesday, committing three turnovers and two fouls, but looked poised and potent with two minutes to go. First, he smoothly rolled off a pick to catch Irvin’s feed and redeem his drops from earlier in the game. Doyle continues to be far better catching the ball high while he struggles with bounce passes. Then he crashed the lane for help defense and drew a charge in the process, helping Michigan close out the win up by less than 10 with two minutes left.

The effort was also indicative of the strong defensive effort put on by the Wolverines. They grabbed 30 defensive rebounds, held NC State to a season-low 59 points and .92 points per possession.

“I was really proud of our defense today,” Beilein said. “Our defense is getting better little by little. And we’re starting to learn a lot of things. I was proud about that.”

As for Doyle, his six points and four boards will help him keep the starting job, and Beilein said after the game he’s more comfortable with his players — at any role.

“I don’t know about identity, but I’m starting to learn more about the buttons to push defensively and offensively – what they can handle right now,” Beilein said.