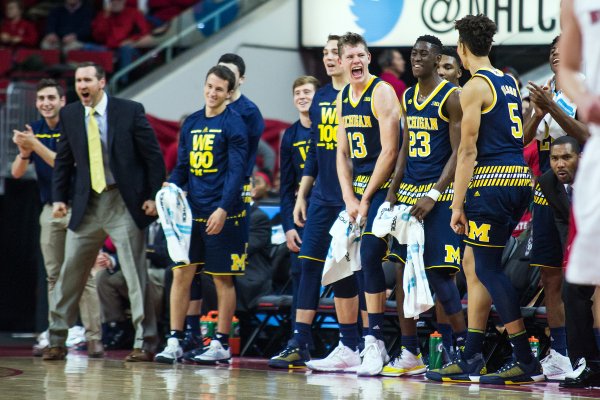 With a little under three minutes remaining in the first half of Michigan’s 66-59 victory over NC State, Derrick Walton came down awkwardly on his left foot, and the Michigan basketball fan base let out a collective gasp.

RALEIGH, N.C. — With a little under three minutes remaining in the first half of Michigan’s 66-59 victory over NC State, Derrick Walton came down awkwardly on his left foot, and the Michigan basketball fan base let out a collective gasp.

That’s the same foot that plagued the point guard throughout last season. It remains unclear whether or not Walton will have to miss time due to the injury (John Beilein called it a “slight ankle sprain”). But judging by his pained facial expression on the bench immediately after he was taken out, it was clear the Detroit native likely wouldn’t be back to finish off the game.

In Michigan’s first true road game, with backup point guard Spike Albrecht still fighting his way back from offseason surgery, the Wolverines needed someone to step up.

At halftime, John Beilein called on Caris LeVert to take over at point guard. And his teammates did the rest.

“Coach came to me and told me I was going to be the lead guard in the second half. Derrick’s our brother out there so we wanted to get the win for him. He played so well in the first half offensively and defensively. We knew we had to play well to win the game,” LeVert said during the press conference after the game.

In the first half, LeVert scored nine points, one assist and one turnover. In the second half, with increased ball handling responsibility, LeVert logged six assists and one turnover

“When you got guys like Duncan and Moe (Wagner) who can really shoot and finish like that, it’s easy to get seven assists,” he said.

It’s true. Two of LeVert’s assists came after Duncan Robinson nailed 3-pointers. The Williams College transfer was huge in Michigan’s win, going 5-for-7 from beyond the arc.

Robinson was instrumental both in extending Michigan’s lead in the first half – which they defended effectively all game – and in putting the game away; he and Zak Irvin hit back-to-back triples with under seven minutes remaining to make a Wolfpack comeback nearly impossible.

“I’m just trying to take good shots,” Robinson said after the game. “That was a big stretch for us, to hit those two big shots. We kind of pulled away then.”

Beilein identified Robinson as one of the Wolverines who has most improved since Michigan’s two dispiriting losses to Xavier and Connecticut earlier this season.

“That was probably the only bad shot Duncan took, in the right corner. That was one of those, ‘no, no, no – that’s my guy!’ It was great.”

“The lights have been on for Duncan Robinson a few times and he’s really playing well,” the coach said. “That was probably the only bad shot Duncan took, in the right corner. That was one of those, ‘no, no, no – that’s my guy!’ It was great.”

Robinson wasn’t the only player who stepped up to help LeVert lead Michigan to a tough win on Tuesday night. Freshman big man Moritz Wagner continued his recent stretch of strong play – further solidifying him as Michigan’s best option in the paint.

The German was better in the first half than the second, but grabbed a couple big rebounds in the latter frame and showed nice touch around the rim. In the first half, he had an impressive drive to the hoop for a dunk, a play that got the Wolverine bench to its feet. After the game, Wagner said he is fitting into his role as the team energizer bunny

“I think that’s kind of my thing, to give the team energy,” Wagner said. “That’s what people ask me to do, and I really enjoy that role. I feel really comfortable in that.”

Muhammad-Ali Abdur-Rahkman also gave Michigan a boost off the bench as he shared the backcourt with LeVert. The sophomore guard stuck to NC State point guard Cat Barber throughout the final 20 minutes and rendered him ineffective.

“Muhammad-Ali did a wonderful job of just staying with Barber,” Beilein said. “Using his quickness, and keeping him from getting the ball in spaces he likes it.”

It remains to be seen how many games Walton will be out, if any, because of his ankle injury. And Michigan still has a long way to go on the defensive end despite NC State’s poor shooting (33 percent for the game). But when Michigan was looking for players other than LeVert to step up and beat a tough team on the road, it found them. This team might not have an identity yet, but it’s getting closer.

“I don’t know about identity, but I’m starting to learn more about the buttons to push.”

It’s a long way of saying that tonight, the shots went in. And that’s fine for now. As Robinson said, “It’s always fun to hit those shots.”