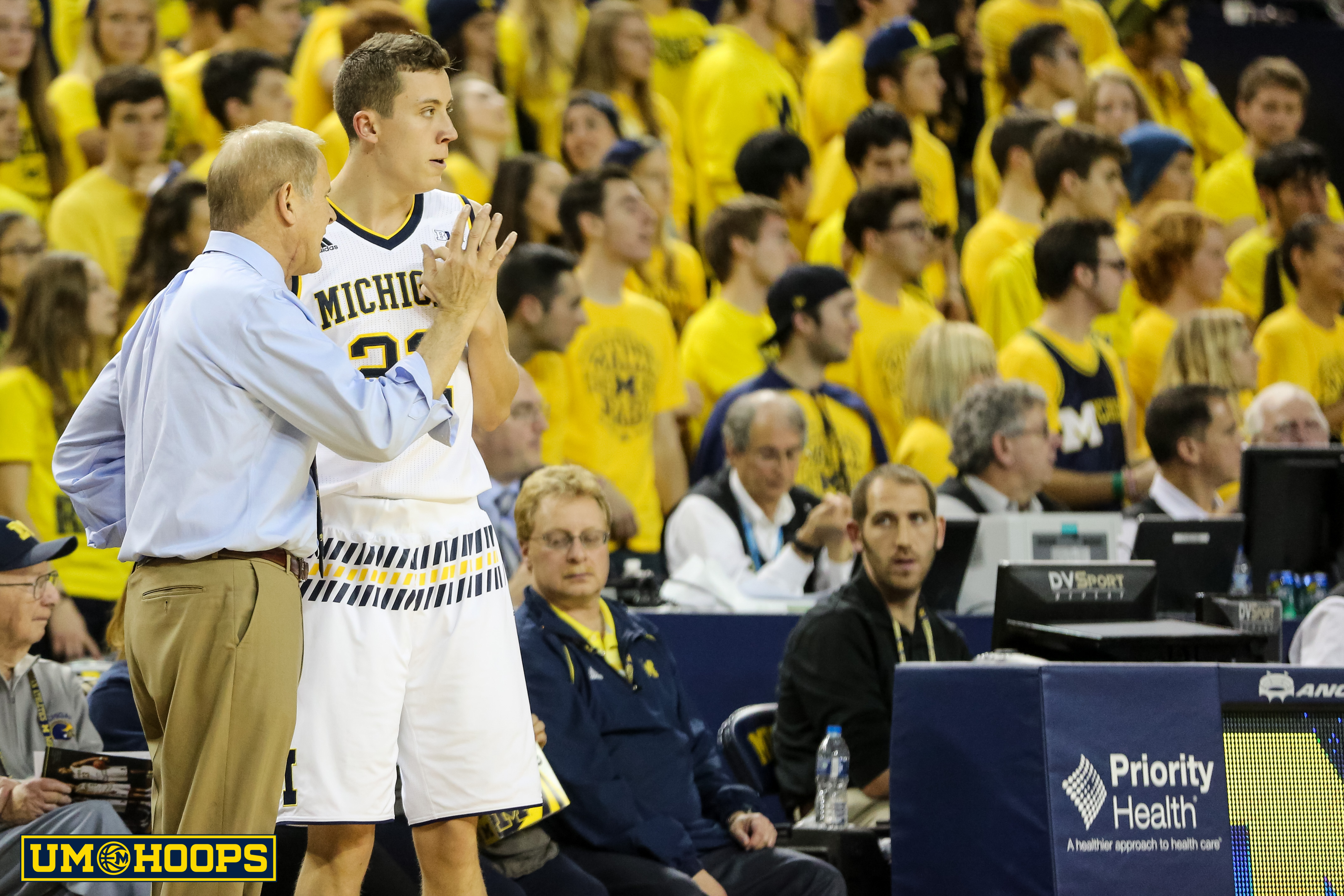 @mattdepoint: As Robinson’s rep for a 3pt specialist becomes more well known how will Mich create opps for him when opposing D’s key on him?

Of course teams will start to pay more attention to Robinson as he continues to knock down shots at a high level, but that’s not necessarily a bad thing.

Watch this video of a LeVert-Wagner screen and roll from Tuesday’s win in Raleigh (H/T MGoBlog) as the mere threat of Robinson’s shooting ability creates spacing for Wagner to roll into.

The Wolverines being a three-point dependent team gets so much attention among fans and media, but the barometer of a Michigan offense is its two-point shooting. If Michigan is making its twos at a high-level then the offense will be rolling because that means those twos are good looks off of ball screen rolls, great cuts and excellent spacing. Right now the Wolverines are shooting 53.8% inside the arc which is about on par with what it shot in 2012, 2013 and 2014 when it had some of its best offenses. Last year, as the team struggled, its two-point shooting fell to 47% (203rd nationally).

Going back to Duncan Robinson, I definitely think that Michigan will make it a focus to get him more looks, especially because he’s already shown that he’s smart enough to pass the ball when the defense is overplaying him (see his four assists vs. Charlotte). My opinion is that if you have an 85 effective field goal percentage then you probably need to shoot more often until that number lowers a bit. (If Robinson had played 4% more available minutes to qualify he’d have the best eFG% in the country).

We started to see some of that in the second half against N.C. State where Duncan hit two of the most difficult shots that he’s attempted this year. As his confidence grows, I would suspect we’ll see more and more shots of those variety because wide open looks will be few and far between.

@rboogs: Do you think Beilein should mix in a more conventional 2-3 zone at times?

Michigan has actually sprinkled in a fair amount of zone this year and I would estimate that it is close to a 50-50 split between the 2-3 and Beilein’s old 1-3-1 zone. I prefer the 2-3 as it’s more of a containing defense, but Michigan hasn’t been all that effective in either.

Michigan players have struggled with communication at times between the guard at the top of the zone and the wing who has to bump and recover on ball reversal. This has resulted in a rash of open wing three shots (Martin hit a huge one on Tuesday against Michigan’s 2-3) as the wing recovers and the guard is late getting over. The Wolverines are also a significantly worse rebounding team when they play zone defense and that’s a major liability considering this team isn’t great on the defensive glass to begin with.

2-3 zone should hypothetically help overcome some of Michigan’s weaknesses — perimeter defense against hard drivers and post-up interior play — but it just hasn’t been successful enough over the last few years to go all in. I found this quote from a high-major assistant speaking to Rob Dauster about Indiana’s defense to be particularly interesting.

“No question you have to simplify,” one high major coach told NBCSports.com. “Be good at one defense. Focus on doing one right. If you try to have an elaborate defensive package, you’ll end up being lukewarm at them all. They need to analyze what they do best and stick to it.”

Michigan’s focus right now is still man-to-man and you can see watching the Wolverines 2-3 and 1-3-1 zones that they don’t have nearly as much practice in either department.

buckets12: Is it reasonable to expect Moritz Wagner to ever play around 30 minutes a game at the center spot this season? Or do you think we will continue to see the 20/20 split with Doyle as we approach conference play?

30 minutes per game is a big number, especially for a big man. Wagner has been fairly foul prone this season (6.6 fouls per 40) which will also limit how many minutes he plays.  I’m okay with bringing him off the bench and aiming for close to a 20-20 split with Doyle. I’d expect that to end up closer to a 25-15 split on most nights, but that gives Beilein the opportunity to play the matchup or go with the hot hand.

‏@tomgritter: Assuming Wagner projects as a 4, how would you rank the order of our 5’s next year? Would Teske or Davis be the starter?

Wagner might be the tallest player that John Beilein has recruited to Ann Arbor who could eventually play the four, but I’m not sure if that comes next year or further down the line.

In the college game, so many teams are playing small at the four spot and Wagner doesn’t necessarily have the skill set to overpower smaller fours. His plus matchup advantage is still going to be his ability to pull opposing bigs away from the basket and then use his ball skills and understanding of the game to make plays offensively.

JJ3: Do you expect M’s transition offense to be more aggressive going forward? Maybe it’s just me but I haven’t noticed a lot of easy transition baskets or transition 3’s. I think the opportunity is there.

There are a few ways to look at transition. There are transition teams that create pace and there are teams that attack off of opportunities. Michigan falls in the latter category as it is never really going to force the issue off of a make or a typical rebound, but it’ll push the ball if the opponent is vulnerable.

I think Derrick Walton has done a fairly good job of this, which is boosted by his ability to rebound and run, but the Wolverines have had a few careless turnovers in transition as well. Part of the reason that U-M hasn’t been able to create transition opportunities is that it hasn’t forced turnovers this year. U-M opponents are giving the ball away on just 16.5% of their offensive possessions, 265th nationally, which means far fewer convenient transition opportunities.

nswan: Bench players are outplaying starters in a couple instances (i.e. Robinson over Dawkins and Wagner over Doyle), at least as of recently. Are the roles of bench vs starter likely to change based recent play or is Beilein using the production off the bench in a “microwave” or energy role?

I touched on Wagner a bit in the first question, but the Duncan Robinson-Aubrey Dawkins question is also interesting. Aubrey Dawkins looks like he’s been sapped of all of his confidence and Robinson has played more minutes than him in the last four games.

Robinson has sparked runs in the first halves of games and he’s been the guy in the game in key parts of the second half. I don’t think there’s much question that John Beilein is more comfortable with Robinson in the game than Dawkins, but what is there to gain by moving Dawkins to the bench other than sucking a bit more confidence out of him?

I wouldn’t be surprised to see Robinson start at some point, but I don’t see a rush to make that move at this point in the season. Let Dawkins hold onto the starting spot and hopefully allow him to string together a few positive performances throughout December to boost his confidence heading into the season.

mgobluehoops23: When will we see the Spike Albrecht we all know and love?

Great question, but one that’s almost impossible to answer. John Beilein wants Albrecht to focus almost entirely on rehab in hopes that he’ll be more prepared for the Big Ten season.

Beilein spoke this summer about how Max Bielfeldt (who had similar hip procedures) wasn’t close to 100% until around January after his procedure. UConn senior Omar Calhoun had a similar procedure (H/T: Brendan Quinn) after his freshman year and he’s never really been the same player. The one-time top-50 prospect averaged 32 minutes and 11 points per game as a freshman and was set to USA Basketball before undergoing the dual hip surgeries and he’s never topped 17 minutes and 6 points per game since.

The answer very well could be that Albrecht will never be the same, but the hope is that at some point he’s able to give Michigan some critical minutes in big games and provide a boost with his vision, shooting and offensive savvy.

John Beilein has mentioned Duncan Robinson pretty consistently since he arrived on campus last summer. Beilein spoke openly about how Robinson’s shooting and passing ability probably could have won Michigan a few extra games last season and said bluntly that he expected him to be a rotation player this season. We’re starting to see everything that Beilein saw last year and I’d bet that we’ll see more and more of it as the season wears on.

At the five spot, there were so many questions and so few guarantees entering the season that I don’t think anyone knew what to expect. Moritz Wagner is improving by the day and I’m not sure even the Michigan coaches knew what to expect from him entering the season. Given how quickly he’s growing (both in physical strength and understanding of the game), there’s no doubt that Michigan coaches very excited about what he brings to the table and how far he could grow in the months and years to come.