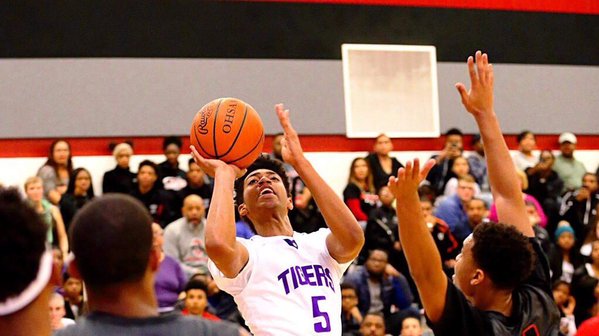 High school basketball season is getting underway and a number of Michigan commitments and targets have gotten off to a strong start.

High school basketball season is getting underway and a number of Michigan commitments and targets have gotten off to a strong start.

Ibi Watson off to impressive start

Ibi Watson saw his stock rise gradualy throughout the summer with a additional offers coming in week-by-week. He appears to have built off of that momentum as he opened the season with 31 points, 11 rebounds and seven assists in his season opener against Springfield. Here’s 270Hoops report on Watson’s performance:

Watson, a Michigan signee, was the one bright spot for Wolverine fans on Saturday, as the 6-foot-5 wing showed a newfound tenacity that he didn’t always play with as a junior. Aggressively attacking the basket whenever possible, Watson was the key for Pickerington Central in a momentum-building 79-64 win.

Trailing 34-33 at half, Pickerington Central opened the third quarter on an 11-3 run with Watson scoring seven points in less than five minutes. Senior wing and Northern Kentucky signee Jalen Tate knocked down a three at the buzzer, sending the host Tigers into the fourth quarter with a 55-44 lead.

Watson will be back in action this weekend against Dayton Thurgood Marshall at the Clark Kellogg Classic at Ohio Dominican.

Michigan basketball fans should be excited about Ibi Watson. He's a different dude this year compared to last. Playing w/ a mean streak

It's great to see Ibi Watson come out with that killer mentality. Think this is what you will get most nights. Has no idea how good he is.

Xavier Simpson’s Lima Senior squad opens its regular season on December 4th against St. Francis de Sales, but has already been active on the scrimmage circuit. Simpson had 35 points, eight assists and six rebounds in a scrimmage against Dayton Dunbar last week.

Simpson has already generated considerable buzz ahead of this season and is thought of as one of, if not the, top point guards in the state.

Xavier Simpson is undoubtedly the best PG in the state. He does the little things. Beilein has himself a true 1

Here’s footage of Simpson in action on the scrimmage circuit including a filthy crossover dribble.

Beachwood (OH) wing Maishe Dailey has been on the Michigan radar since late July and the class of 2016 wing forward is considering a move to the class of 2017, but hasn’t made that decision yet. Dailey has visited Michigan multiple times, but has most recently told reporters that he’ll wait until the end of the season to decide whether to prep a year or sign late in the 2016 class.

“When I knocked down my first two shots, it felt like I couldn’t miss again,” said Dailey, a 6-foot-6 wing that dropped in a game-high 23 points for Beachwood, ranked seventh in the cleveland.com Preseason Top 25 after the 2015 season ended with a district finals loss to Division III state champion Villa Angela-St. Joseph.

Dailey’s last reported Michigan visit was in November and Michigan is one of several schools that are standing out to him in the class of 2017.

Dailey said if he does sign with a school in the class of 2016, his current top choice is Northern Iowa. He’s fielding interest from Michigan, Xavier, Clemson, and Dayton for 2017.

Djuricic averaged 12.2 points and 9.2 rebounds per game at the 2015 U16 FIBA Americas this summer and has posted some big numbers early on this season with 26 point and 11 rebounds and 21 points and five rebounds performances already this season.

Djuricic has offers from Niagara, Duquesne and Washington State with strong interest from Iowa, Michigan, Stanford and Valparaiso.