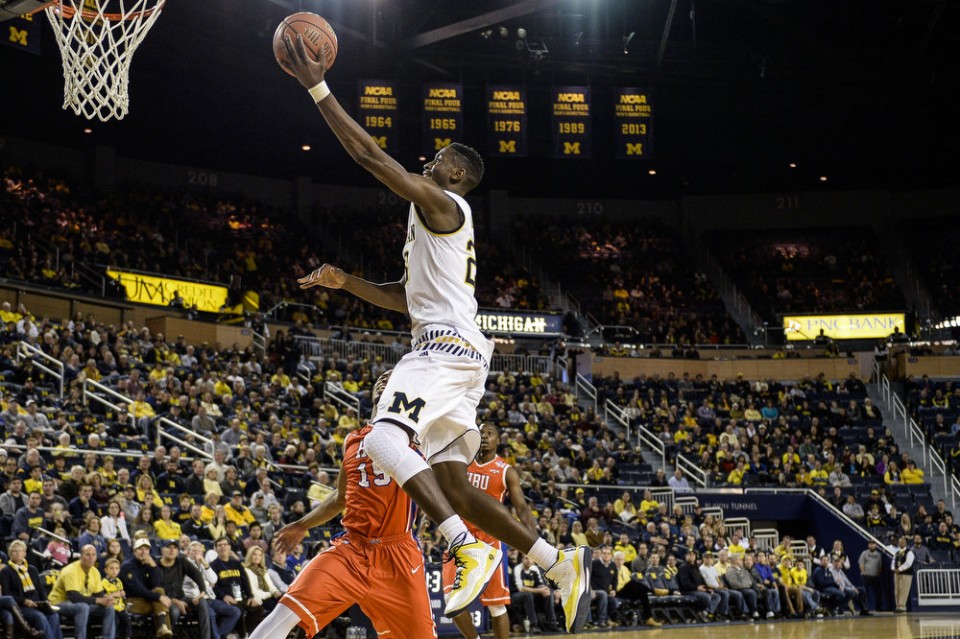 Nearly one year to the day after being stunned at home to the New Jersey Institute of Technology, the Michigan basketball team avoided a second-consecutive post-Big Ten/ACC Challenge let down. Instead, the Wolverines (6-2) cruised to a 25-point win over Houston Baptist (2-6).

Nearly one year to the day after being stunned at home to the New Jersey Institute of Technology, the Michigan basketball team avoided a second-consecutive post-Big Ten/ACC Challenge let down. Instead, the Wolverines (6-2) cruised to a 25-point win over Houston Baptist (2-6).

It was a sluggish night for parts of Michigan’s lineup, and the Wolverines were without junior point guard Derrick Walton, but senior guard Caris LeVert was his usual dominant self. LeVert found plenty of time to make plays for himself, scoring 25 points on 13 shots to go with eight rebounds — both game highs.

Perhaps more importantly, 14 of those points came in the first half, when the rest of the Wolverines were shooting just 8-of-19 from the field and Houston Baptist only trailed by 9. By the time his teammates caught fire offensively, LeVert was able to coast through the rest of the game.

It was over when…

An argument could be made that the Wolverines’ 11-0 to start the game signified the end of Houston Baptist’ hope for an upset, but the Huskies recovered to enter halftime down just 37-28. But with 17:41 to go in the game, Michigan heated up with a pair of Duncan Robinson three-pointers that triggered an 18-4 run that put the game away for good. After missing his first four three-point attempts, Robinson connected on five triples in a row and finished with 19 points.

Room for improvement: Lackadaisical play lets HBU back into the game

Despite the 11-point lead just moments into the game, Wolverine fans held their breath when Houston Baptist clawed back to pull within two midway through the first half. LeVert was able to carry the load enough against the Huskies, but against teams with more depth and playmakers, sloppy turnovers and fouls can quickly become the Wolverines’ downfall.

Michigan dominated ball control Saturday, turning that ball over on fewer than 10% of its possessions while forcing the Huskies to turn the ball over on nearly a quarter of their offensive possessions. The Wolverines outscored HBU 23-9 in points off turnovers and 12-3 in fastbreak points in the easy victory.