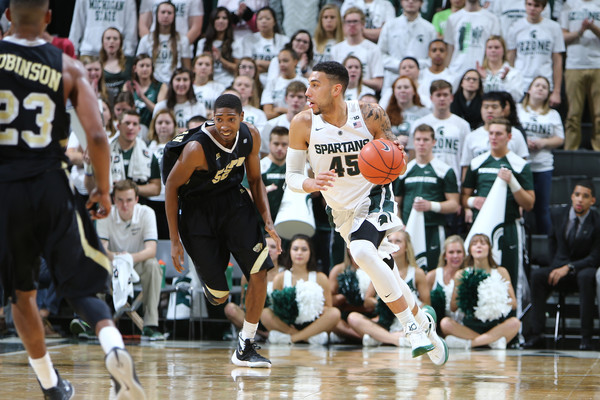 The first edition of our 2015-16 Big Ten Power Rankings takes a look at Michigan State’s passing, Purdue’s domination of the paint, Duncan Robinson’s insane shooting and much more.

Welcome to our Big Ten Power Rankings where we examine the conference on a weekly basis and attempt to rank all 14 teams while providing a few nuggets of insight and analysis.

Michigan State is undefeated and poised to take over the No. 1 ranking in the country. It has one of the top candidates for National Player of the Year, the best offensive rebounder in the Big Ten and arguably the best quality win of the season against Kansas on a neutral floor. But what’s the most impressive element of this Michigan State team? The Spartans’ ability to pass the ball. Purdue has combined the Big Ten’s best perimeter defender (last year’s Big Ten Defensive Player of the Year Rapheal Davis, currently sidelined with a knee injury) with the most intimidating collection of post players in the conference. The result? The second best defense in the country. Purdue opponents shoot 36% on twos and 26% on threes this season. Both of those measures rank in the top ten nationally.

Purdue had a good shooting defense last year, but the biggest improvement thus far has been on the defensive glass where Caleb Swanigan, AJ Hammons and Isaac Haas have allowed Boiler opponents to rebound just 24% of their missed shots.

Compare Trimble’s efficiency and playmaking responsibilities with the rest of the league using this chart of percentage of assisted field goals versus effective field goal percentage (minimum 20 made field goals).

Trimble is essentially forced to create offense on his own like he plays for Rutgers or Nebraska, yet is more efficient than almost anyone with similar playmaking duties.

Iowa’s hard to get a handle on through eight games. The Hawkeyes are balanced and efficient on each end of the floor — their defense cost them games to Dayton and Notre Dame in Orlando — and they don’t have many outliers. There aren’t huge red flags on Iowa’s profile or overwhelming strengths. The Hawkeyes are just a really solid, experienced — four seniors and a junior in the starting lineup — basketball team that should win a lot of games this year.

He’s shooting 61% on 41 three-point attempts and his effective field goal percentage of 83.3%. His offensive rating of 155.5 points per used offensive possessions is third-best in the country. And he’s a few minutes away (57.5% of available minutes compared to 60% of minutes to qualify) from qualifying for KenPom’s eFG% and true shooting percentage leaderboards at which point he’ll lead Division I.

Bringing back the graph that we used above to demonstrate Melo Trimble’s ability to create his own offense. Here’s Duncan Robinson compared to the rest of the country on the percent of assisted field goals to eFG% curve (minimum 20 made field goals).

Robinson is essentially re-defining the role of catch-and-shoot player and he’s doing it at a higher level than anyone in the country.

Indiana fans are up in arms over Indiana’s horrific defense, and rightfully so after giving up over a point and a half per possession at Duke, but give Tom Crean some credit for his offensive coaching abilities. In the offseason I wrote about how Indiana took the highest percentage of threes and layups/dunks in the Big Ten by a wide margin and the Hoosiers are keeping up a similar trend in 2015-16. Here’s an updated version of that chart, reminding us that Indiana takes and makes more good shots than anyone else in the league.

Bo Ryan’s (maybe) farewell season hasn’t gone swimmingly. The Badgers lost their home opener to Western Illinois and were beaten by Georgetown and Oklahoma already this season, but they also have a handful of very good wins. Wisconsin gutted out a win over VCU in Brooklyn, won at Syracuse and handled Temple at the Kohl Center over the weekend.

We’ve all made the mistake of counting out Wisconsin too soon in the past and would anyone be surprised to see them in the Big Ten mix when the calendar rolls into February?

Northwestern dropped a game to North Carolina in Kansas City, but has otherwise handled business en route to a 7-1 record. The Wildcats don’t look to have much competition due up on their schedule (the toughest remaining game is at 155th ranked DePaul) so could enter Big Ten play at 12-1. Sophomore guard Bryant McIntosh has taken the next step in his development while freshman forward Aaron Falzon has given the Wildcats a nice inside-outside threat at 6-foot-8.

At the end of the day, the Wildcats prove the ultimate problem with power rankings before the Big Ten season. There are probably plenty of teams that would have one loss with their record and it’s hard if not impossible to say how many losses they would have if they had played Wisconsin or Indiana or Michigan’s schedule to this juncture.

Nebraska has a lot of ‘good losses’ without many ‘good wins’ thus far, but head coach Tim Miles appears to have found a good one in Kansas transfer Andrew White. White is shooting 56% on twos and 43% on threes for a 61 effective field goal percentage and Big Ten fans should familiarize themselves with the 6-foot-7 junior before January rolls around.

Minnesota snapped a 47 game non-conference home winning-streak when it lost to South Dakota on Saturday. That was an ugly loss for a Minnesota team that hasn’t done much of note this year and appears to be trending in the wrong direction in year three of Richard Pitino, but perhaps the most ridiculous aspect of this loss is that 47 game winning streak.

Minnesota hadn’t lost at home during the non-conference season since November 29th, 2010 to 99th ranked Virginia. The 47 game win streak featured just eight games against top-100 teams, three wins over high-major opponents and just one win over a team ranked in the top-50 (all rankings via KenPom).

Here’s the list of Minnesota’s top 100 home wins during that five year stretch:

Penn State is 5-2 and hasn’t played a top-100 team this season so it’s hard to judge the Nittany Lions. They’ll have their first opportunity for a quality win on Tuesday when they travel to face No. 47 ranked George Washington. Despite the underwhelming schedule, Penn State’s inability to score inside the arc is a major concern. The Nittany Lions are shooting just 42.3% on twos (308th) and nobody on the roster (other than Deividas Zemgulis (1-2)) has made more than half of their two-point attempts.

Ohio State fans are frustrated with Thad Matta’s 3-4 start this season and the reason for the Buckeye struggles is obvious: turnovers.

The Buckeyes have only given the ball away on at least a fifth of their possessions in two other seasons under Matta 2007-08 when they missed the NCAA tournament and 2008-209 when they snuck in at 10-8 and were bounced in the first round by Siena.

Illinois has already dropped five games and has the second worst defense in the Big Ten.The respectable losses — Iowa State, Notre Dame and Providence — are one thing, but home (played in Springfield, IL) losses to Chattanooga and North Florida are particularly ugly. Opponents are shooting a ridiculous 52% on twos and 39% on threes against the Illini for a 54.8 eFG% which ranks 311th nationally. Could this be the third straight year that John Groce misses the NCAA tournament?

Rutgers is the opposite of Michigan State. The Scarlet Knights have the 316th best offense in the country and only 22.6% of their made field goals are assisted — 349th in the country. It’s all isolation ball in Piscataway and the result is the worst team in the Big Ten by a wide margin.