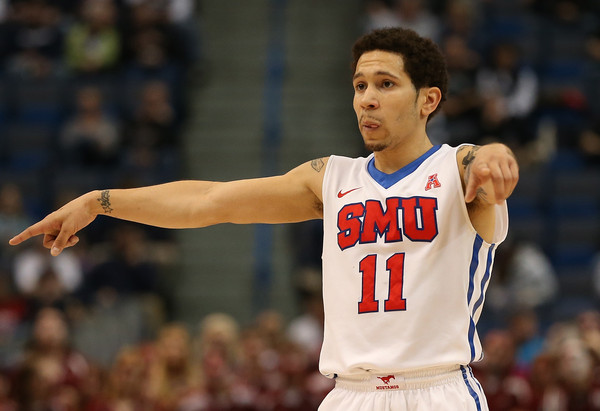 With two frustrating losses and two solid wins, tonight’s game at Southern Methodist (6-0) is the swing game of Michigan’s non-conference schedule. A win would position the Wolverines where they want to be heading into the Big Ten season while a loss would leave them with serious work to do in conference play.

It’s only fitting that they found themselves in a similar spot a year ago. Last year, the Wolverines were hurtling toward rock bottom with three straight losses to NJIT, Eastern Michigan and Arizona (by 27) and looked at a home game against SMU as a chance to rebound before league play. The Mustangs’ 15-3 run over the final 7:30 that turned a 1 point Michigan lead into an embarrassing 11 point home loss felt like a death knell for Michigan’s 2014-15 season.

The stakes aren’t nearly as dire this year as the Wolverines don’t have the same sort of ugly early losses as they did a year ago, but the importance of this game remains. Michigan needs a quality win and it can erase some of last year’s demons in the process.

SMU’s schedule hasn’t forced it to work up much of a sweat thus far. The Mustangs’ toughest non-conference game was at home against Yale (ranked 88th by KenPom) and they escaped with a two-point victory. The easy schedule has allowed the Mustang offense to work up a full head of steam entering tonight’s contest. SMU has scored over a point per possession in every game this year and it has a roster loaded with great scorers and offensive rebounders.

The Mustangs are ranked 11th nationally in effective field goal percentage, making 55.5% of their twos (32nd) and 44.1% of their threes (8th) for a 58.3 eFG%. Despite the accurate three-point shooting, only 27% of SMU’s shot attempts come from outside the arc. Those shooting numbers are impressive, but the offensive rebounding numbers are downright scary. SMU is the fifth best offensive rebounding team in the country, grabbing 42.2% of its misses off the backboard.

Stopping SMU is difficult because it is built around scoring inside, but effective enough from three-point range to make you pay for cheating down (as Michigan did against NC State) and dominant enough on the glass to make up for any mistakes.

Defensively, there are more warts on the SMU resume. The Mustangs have given up over a point per possession in four out of six games despite the cushy schedule. They have a strong interior defense (42.2% allowed on twos), but are ranked just 151st in three-point defense at 33.1% allowed. Similar to the UConn and Texas teams that Michigan has faced already this season, teams attempt a lot of threes (43% of FGA) against the Mustangs because of their interior defense.

Nic Moore makes the SMU offense go. He’s a 42% three-point shooter and over half of his attempts are treys. John Beilein referred to Moore as a ‘dynamo‘ and praised his ability to create his own offense while still keeping his teammates involved. He’ll be a huge defensive challenge for Michigan, especially with Derrick Walton sidelined or limited — he didn’t practice on Monday.

He’s joined in the backcourt by 6-foot-5 junior Keith Frazier. Frazier shoots 54% on twos and 37% on threes with close to a 50-50 split and is efficient in a limited role in SMU’s offense. He shied away from the three-point shot as a sophomore (66 attempts down from 103), but he’s still a threat and connected on 6-of-10 triples against New Hampshire on Saturday.

6-foot-9, 245 pound big man Markus Kennedy was just returning from suspension when Michigan faced SMU last year, but appears to be rounded into form this year. Kennedy shoots 60% on twos and is also a great passer out of the post with a team-high 24% assist rate.

Kennedy is relieved by 6-foot-7, 240 pound Texas Tech transfer Jordan Tolbert. Tolbert touts the fourth best offensive rebounding rate in the country, shoots 58% on twos and does a good job of getting to the free throw line.

6-foot-8, 205 pound senior Ben Moore starts at the four spot.  He had a quiet game against Michigan last year with 0 points on three shot attempts, but fits the mold of other SMU frontcourt players: great on the offensive glass, blocking shots and finishing around the rim.

Freshman guard Malik “Shake” Milton comes off the bench, but plays significant minutes. Milton has always had a great feel for the game dating back to his time in the Nike EYBL and he’s shooting 67% on twos and 56% on threes through early season action.

6-foot-6 guard Sterling Brown is known for his defense, rebounding and finishing and has connected on 4 of 6 three-point attempts. Another freshman guard, Jarrey Foster, is also active on the offensive glass (the fourth nationally ranked offensive rebounder on the roster), and draws more fouls than any other Mustangs.

Losses to Xavier and UConn hurt because on paper they looked like a better chance at a quality win than Michigan’s test tonight. Those games were at home or in a foreign country against teams expected to be of a similar caliber.

Tonight, the Wolverines will head on the road to face an undefeated opponent projected at the top of its league with a roster built to exploit some of Michigan’s critical weaknesses. The Wolverines have the firepower and shooting ability to win on the road at SMU, but it will take one of their best defensive performances of the season. KenPom projects a 71-66 Mustang victory, giving Michigan just a 31% shot at the road victory. The Wolverines opened as 5 point underdogs in Vegas, but the line has crept to 8 as questions about Derrick Walton’s health remain.